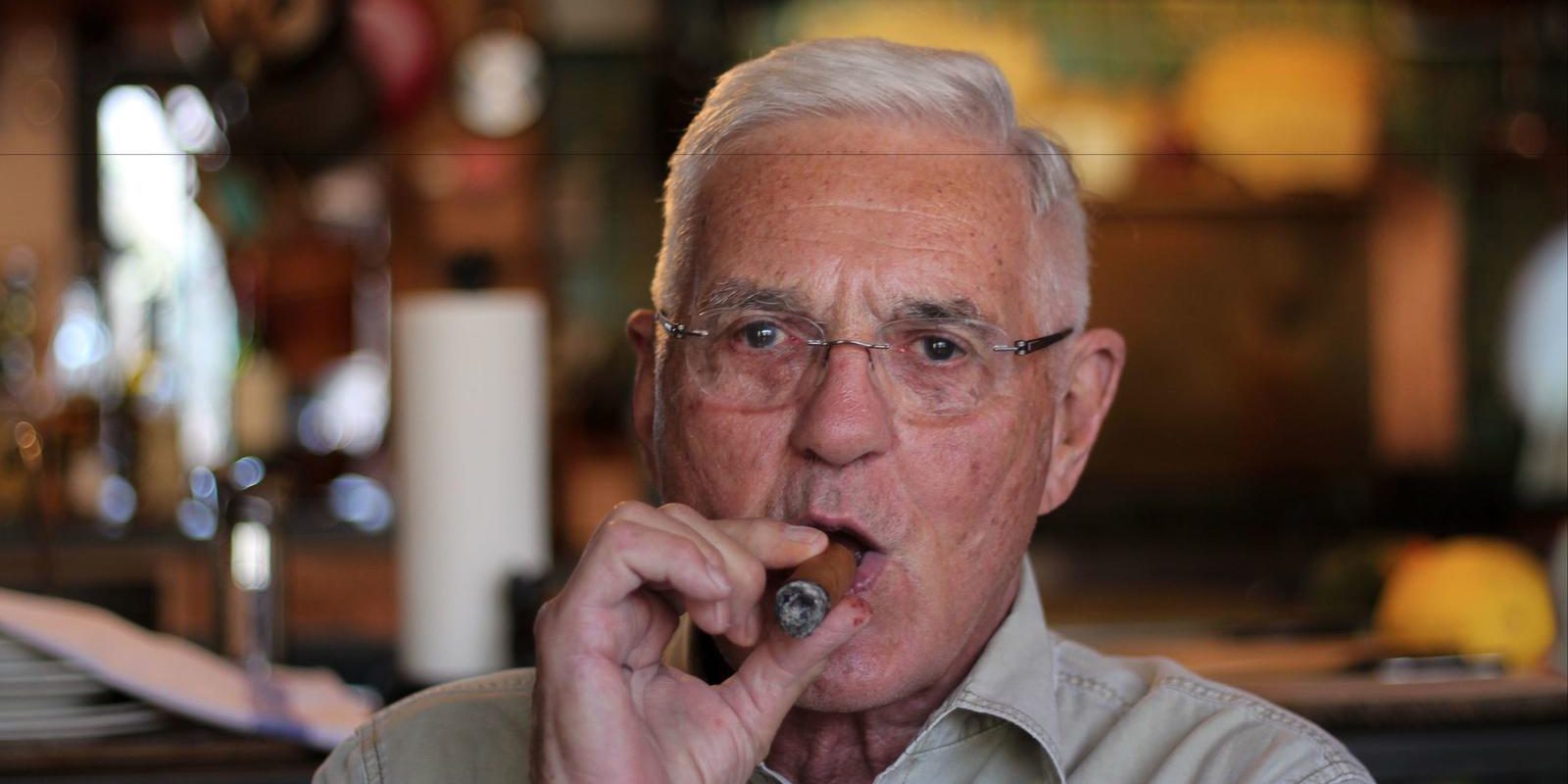 Bob Lutz, the former GM executive often described as the “bad boy” of the US auto industry, is still pushing the old talking points of legacy automakers about electric vehicles. In a new interview with the Times, Lutz encapsulated the outdated vision for EVs and as usual, he took a swipe at Tesla.

At this point, it almost looks like it is his job to attack Tesla and electric cars.

In the past, Lutz compared Tesla to socialism even though GM took $11 billion from taxpayers under his reign and last October, right before Tesla released its earnings, Lutz went on a media blitz spreading misinformation about Tesla.

His main problem is that Tesla doesn’t turn a profit, but the way he talks about it makes it sound like more of a problem than it actually is.

For instance, during an interview in October, he said that Tesla could never be profitable even if they increase production because they don’t make money on the car they are selling now:

“If you’re not recovering labor and materials in your sell price, then doing twice as many or three times as many or four times as many doesn’t help. The losses just get bigger and bigger.”

By saying that they are not “recovering labor and materials in your sell price”, he is saying that Tesla is selling vehicles with a negative gross margin, which is simply not true. Tesla has a positive gross margin on its vehicles for years now and as much as 20% for the past few quarters. That’s without accounting for ZEV credits.

When asked about Tesla in the interview published by the Times today, he again made reference to “losing money on every car”:

“I don’t know why it is that otherwise intelligent people can’t see what’s going on there. They lose money on every car, they have a constant cash drain, and yet everybody talks as if this is the most miraculous automobile company of all time.”

While not as clear as the previous comment, it again makes it sound like Tesla is selling cars below cost, which is simply not true.

Tesla undoubtedly loses money overall, but that’s mainly because the company is heavily investing in its growth with the Gigafactory, Fremont factory, stores, service centers and Superchargers.

The fact that Lutz says that “otherwise intelligent people can’t see what’s going on there” is baffling. Analysts covering Tesla, even some who are rather bearish on the stock, can clearly see a path to profitability. Here are Morgan Stanley’s projections for example: 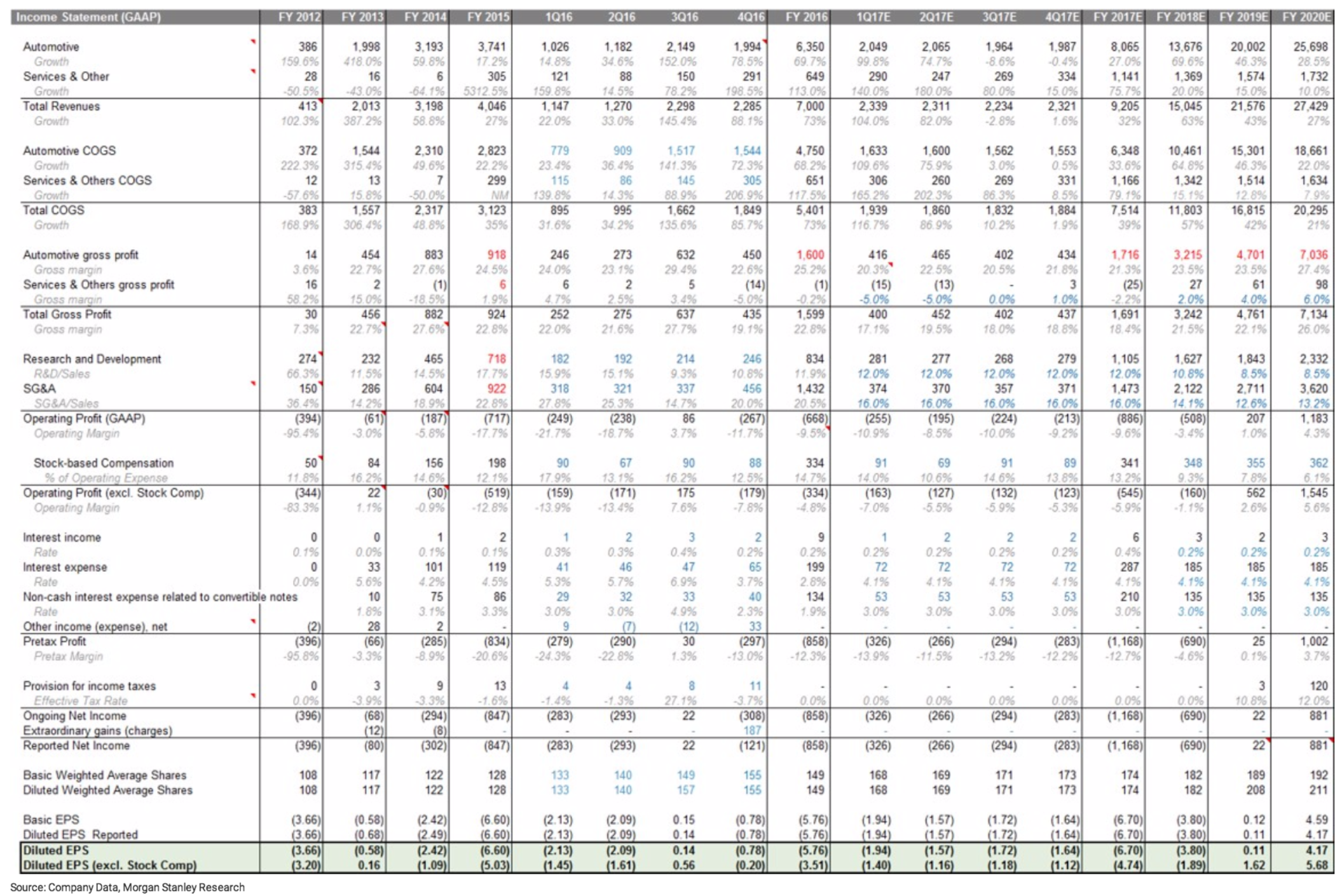 They see Tesla making a significant profit in 2020 and that’s despite them projecting deliveries way below what Tesla is guiding.

But when Lutz shares his view of electric cars, it sounds like there’s no way to make money selling them:

“Raising capital is not going to help, because fundamentally the business equation on electric cars is wrong. They cost more to build than what the public is willing to pay. That’s the bottom line.”

That’s a talking point that the “automotive alliance”, the US auto industry’s lobbying group, has been pushing for years. More recently through their effort to get the EPA to review the fuel consumption standard.

It’s a self-fulfilling prophecy. Automakers say that people don’t want electric cars so they make little of them and without the advantages of mass production, they are expensive. So of course, few people buy them and then automakers claims that there’s no demand.

It’s not surprising that Lutz, who says he voted for Trump, argues that the President should listen to the industry and remove the regulations:

“If he can get rid of most of the thicket of regulation — you always have to have some regulation because you can’t go back to laissez-faire economics — but if he works with the business alliances and the car industry and gets a list that says these are the 10 regulations that have to go, and if he actually gets rid of those, it will create tons of American jobs.”

Again, it’s important to keep in mind that almost the entire US auto industry went bankrupt under the leadership of Lutz and others like him.

Based on the current lobbying efforts of US automakers, it looks like they still agree with him and while they may not want to mass produce electric vehicles, it’s not the case for other companies, like Tesla, but also several large European automakers, like VW and Daimler.

If they don’t start investing in volume production of all-electric vehicles right now, they might get left behind.