A new study published this month by McKinsey & Company and embedded below looks into how automakers can move past producing EVs as compliance cars and “drive electrified vehicle sales and profitability”. Unsurprisingly, it describes battery economics as an important barrier to profitability and though the research firm sees a path to automakers making a profit selling electric vehicles as battery costs fall, it doesn’t see that happening for “the next two to three product cycles” – or between 2025 and 2030.

Despite that drop, battery costs continue to make EVs more costly than comparable ICE-powered variants. Current projections put EV battery pack prices below $190/kWh by the end of the decade, and suggest the potential for pack prices to fall below $100/kWh by 2030.

We are talking about complete battery pack cost and not just the battery cells. The costs of both are often confused.

Automakers capable of staying ahead of that cost trend will be able to achieve higher margins and possible profits on electric vehicle sales sooner. 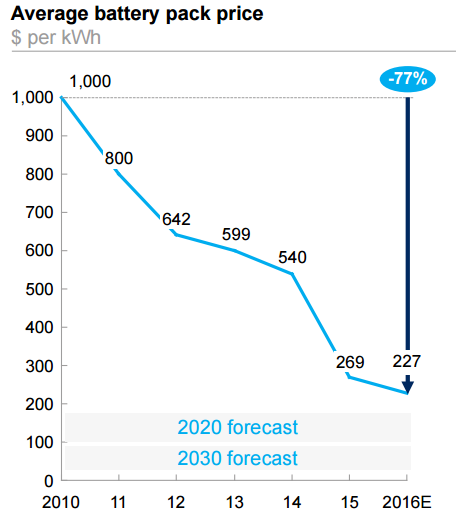 That’s how the automaker manages to achieve close to 30% gross margin on its flagship electric sedan, the Model S.

Tesla aims to reduce the price of its batteries by another 30% ahead of the Model 3 with the new 2170 cells in production at the Gigafactory in Nevada.

It should enable a $35,000 price tag for a vehicle with a range of over 200 miles, but McKinsey sees $100/kWh as the target for ” true price parity with ICE vehicles (without incentives)”:

Given current system costs and pricing ability within certain segments, companies that offer EVs face the near-term prospect of losing money with each sale. Under a range of scenarios for future battery cost reductions, cars in the C/D segment in the US might not reach true price parity with ICE vehicles (without incentives) until between 2025 and 2030, when battery pack costs fall below $100/kWh, creating financial headwinds for automakers for the next two to three product cycles.

It matches the estimates of most battery manufacturers, but of course, Tesla is again pushing for a more aggressive timeline. CEO Elon Musk has previously hinted at a possibility of achieving a battery cost of $100 per kWh in 2020 – 5 to 10 years before most estimates.

They plan to achieve the price target with economies of scale and manufacturing efficiency improvements through the Gigafactory program. Whether they can achieve it or not remains to be seen, but it’s not impossible if they are truly currently below $190 while projections didn’t estimate that price point until 2020.

It wouldn’t be surprising to see other automakers following Tesla with their own efforts to build giant battery factories in order to reach similar price points. Another explanation for the cost lead could be the type of cell and the pack architecture. Tesla has been mostly alone in producing battery packs for electric vehicles using thousands of individual cylindrical li-ion battery cells in each pack. In contrast, established automakers, like Nissan with the LEAF or even GM with the Chevy Bolt EV, have been using fewer but larger prismatic cells to build their electric vehicle battery packs.

Recently, new electric vehicle companies have been following Tesla with cylindrical li-ion battery cells instead of prismatic cells like most automakers.