GM will start delivering Chevy Bolt EVs outside ZEV states this summer, all states in September

We finally have a clear idea of when GM is planning to make the new Chevy Bolt EV available everywhere in the US. They announced that the Bolt EV will be available in all 50 states at launch, but they gave up on the idea last year and as we suspected, only made the vehicle available in California at launch. It’s now in both California and Oregon – more ZEV states will follow during the first half of the year.

Now we learn that non-ZEV states will follow in July and the automaker only plans for all-state availability in September – about a year after originally planned.

If you follow Electrek, this shouldn’t be surprising news since it was pretty much what we were expecting since last year.

The Chevy Bolt EV works for a lot of drivers at the ~$30,000 price point after incentives and therefore, GM’s low-volume production (~30,000 units) will have difficulty satisfying the demand in states with zero-emission mandates or even in California alone.

It makes more financial sense for GM to deliver the vehicles in those states where it can receive ZEV credits to compensate for its gas-guzzling vehicles. As we previously reported, reports suggest that GM will lose ~$9,000 for every Chevy Bolt EV it sells before ZEV credit under its current pricing model.

After meeting with GM’s CFO, a JP Morgan analyst even said that “the Bolt EV is not for profit but to subsidize GM’s gas-guzzling car business”. It certainly casts some doubts about the availability of the vehicle outside of ZEV states, but here’s our best look at the planned rollout so far (via Green Car Reports) but sent separately by Chevy: 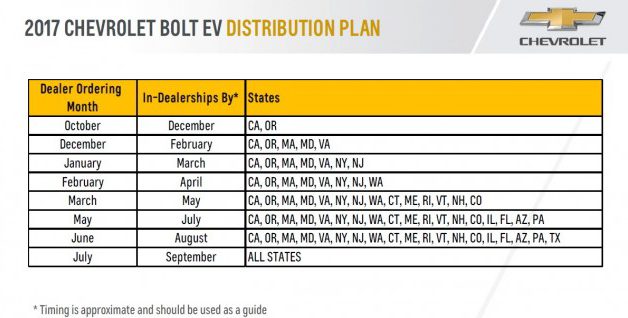 The “in-dealership” availability is only for “Bolt EV-approved dealership” and GM hasn’t revealed too many information about how many and which dealers will be approved. It could be a way to limit the supply in states without ZEV mandates, like it was done with previous EV models.

If you plan on getting a Bolt EV and you are not in a ZEV state, we suggest that you reach out to your local dealer during the ‘Dealer Ordering Month’ listed above in order to get your place in line in anticipation of limited supplies.

Hopefully, GM will increase its planned production in the coming months if the early demand is good enough. They only started deliveries in the last few weeks of December and managed 579 Chevy Bolt EVs in 2016. They will need to deliver 5 times that this month in order to be on target for their annual goal this year.