There seems to be an unlikely rivalry brewing amongst charging networks, and while at first it could have been seen as a good thing since competition is generally good for customers, it now seems to have reached a point of weird misinformation that is becoming detrimental to EV customers.

It started back in September after GM launched its marketing efforts for the Chevy Bolt EV and partnered up with ChargePoint for charging. Forbes immediately tried to make a pageview-grabbing war, ‘Tesla Supercharger vs ChargePoints’, but I think we shut that down quickly. (TL;DR: Tesla owners can use ChargePoint’s DC stations, and do often, but not as often – see below – as ChargePoint asserts)

It didn’t end there, as GM is now using CHAdeMO and Tesla Superchargers in its advertising of its new all-electric car, even though the vehicle doesn’t have the capability to use either of those two types of charging stations.

On its Canadian website for the Chevy Bolt EV, GM explains the charging options for the vehicle and it includes a map of charge points. The big problem is that the map includes several charging points currently not compatible with the Bolt EV, including Tesla’s Supercharger network and the CHAdeMO stations at Nissan Dealers for instance.

The map appears to be a plug-in of PlugShare’s map in a version that doesn’t account for the compatibility with the Bolt EV, which makes potential buyers see more charging points than they would have access to, unless there’s something we don’t know about a deal between Tesla and GM or a Chademo->CCS adapter, but that’s unlikely.

We asked GM to comment on the map. We were told: “no, there is not compatibility with [Tesla] Superchargers or CHAdeMO stations” 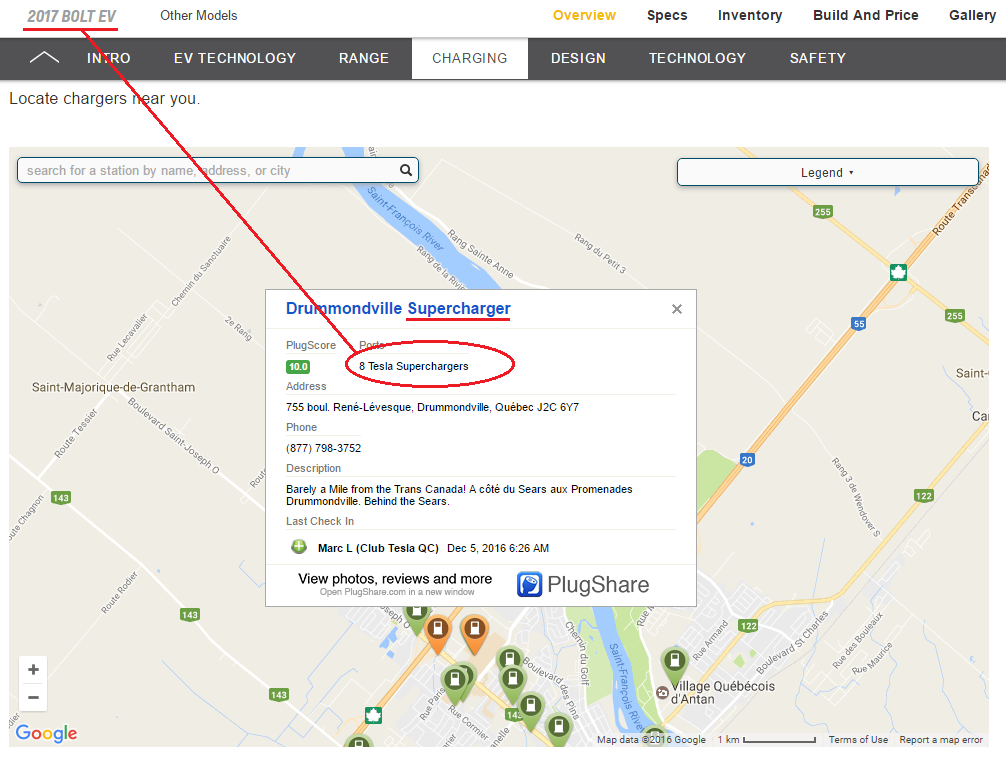 Even if the Bolt EV had access to Tesla’s Supercharger, the vehicle’s power input capacity is capped at 50 kW while Superchargers can deliver up to 120 kW. The Bolt EV isn’t optimized for this level of power, and even though Tesla has expressed being open to the idea of sharing its fast-charging network it’s doubtful the company would allow slower charging vehicles to clutter the network.

It isn’t just Tesla Superchargers. Places like Nissan LEAF dealers with CHAdeMO-only DC charging are listed as Level 3 DC charging in Chevy’s map. Most of these places also have a Level 2 charge option, but Bolt owners hoping to get 90 miles in 30 minutes of DC fast charging will be extraordinarily disappointed and, frankly, left out in the cold with the 20-ish miles per hour of charge that these level-2 chargers afford. 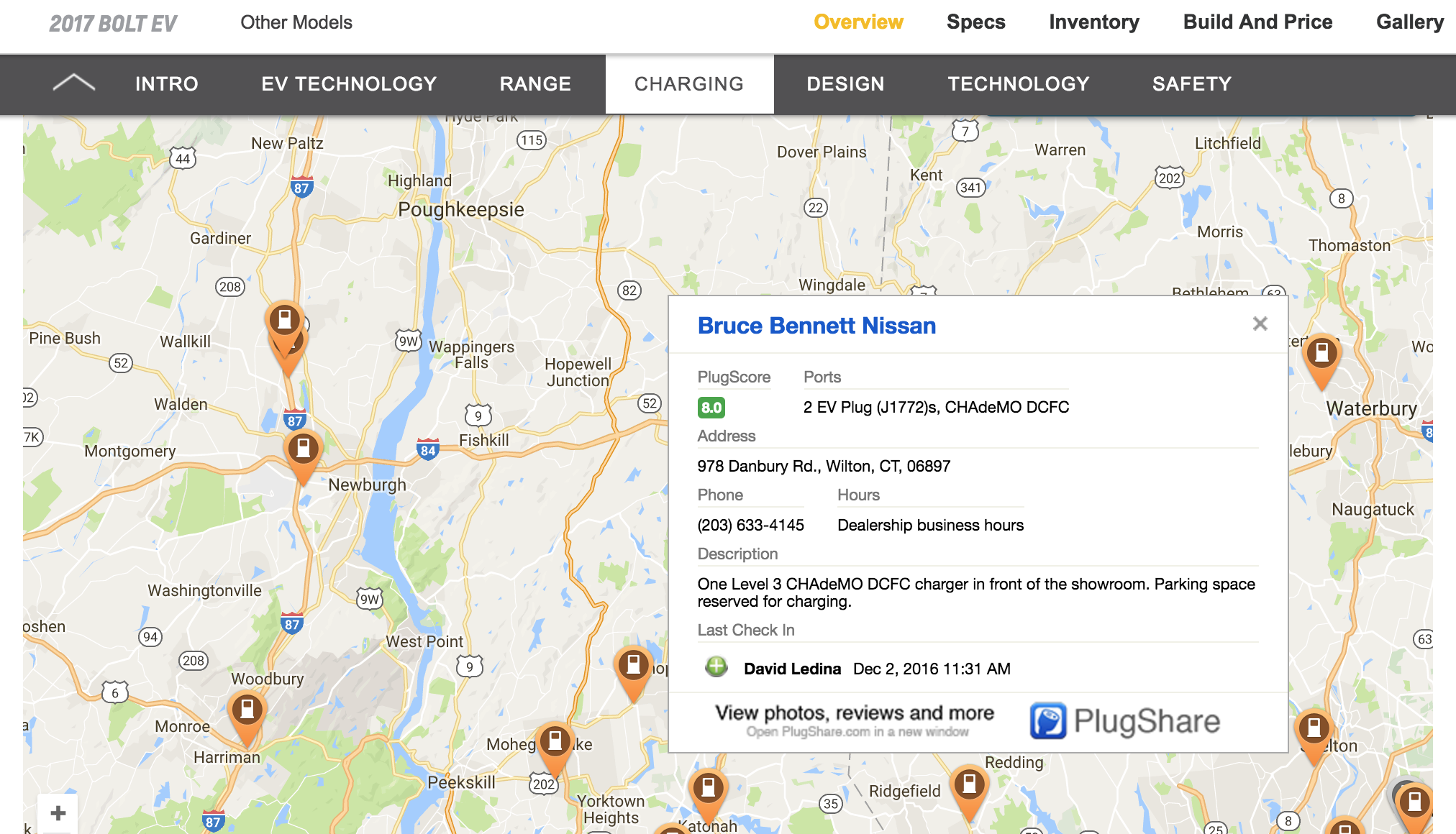 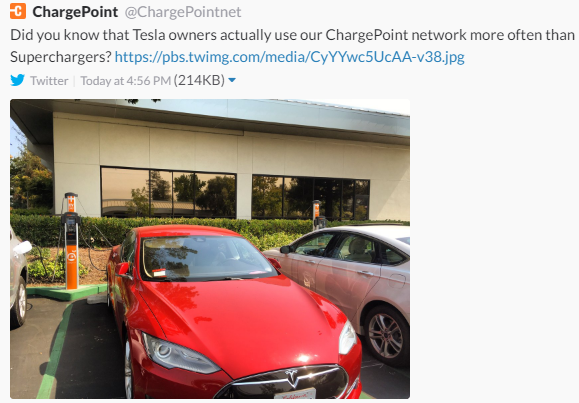 I was doubtful of the assertion, but I gave ChargePoint the benefit of the doubt and asked them if they had any data to prove the claim. After a few inquiries, the company removed the post on social media and stop answering my questions.

ChargePoint has a growing network of electric vehicle charging stations and it is in a good position to be an important part of the auto industry’s transition to electric power. But their marketing and communications are misguided at best.  Automakers that don’t want to invest in their own network of charging stations, like GM, can rely on independent networks like ChargePoint and evGO to provide charging stops for their owners.

Tesla, of course, went the other direction and deployed its own network of fast-charging stations, Superchargers, with its own standard that provides a much higher power output than most DC fast-charging stations currently available. That said, insanely fast 350kW CCS chargers are in development, and we’ve implored Chevy and other manufacturers to get on board here as soon as possible.

The main issue we have here, and the reason for this post, is that prospective Bolt EV owners are going to look at the map that Chevy provides and say “OK, there are a few fast-charging stations between where I am and where I need to travel,” but if/when they get their vehicle, they’ll find out that they can’t use these charging stations, resulting in outrage and disappointment in Chevy and the EV marketplace.

We’d love to hear that all manufacturers are working together on one 350kW-type of charging solution which all EV owners can use. While Tesla is clearly ahead of the game in this respect (with their 145kW lead, CHAdeMO adapters, and sitting on the CCS standard board), we are hoping other manufacturers make efforts in this area.