Forbes came out with one of the most misleading and biased articles on EVs I’ve seen (presumably) not put out by someone on an oil company payroll yesterday: ‘Who Has The World’s Biggest EV Charging Network? Trigger Warning: It Ain’t Tesla‘. To be honest, I probably wouldn’t have seen it if ChargePoint, the company being discussed in the article, hadn’t shared it:

EV charging spots by the numbers: ChargePoint is everywhere drivers want to be: https://t.co/zxtQnKFDTt pic.twitter.com/R8TExTJmsC

The title in itself, while sensationalist, is actually accurate enough not to be libel. There are charging networks out there with more charge points than Tesla’s own networks, which is great – especially because Tesla owners can happily use almost all of them, but then the author makes his point by manipulating the data and making plain false claims.

Update: Forbes has since heavily updated the article correcting some of the misleading information we pointed in this article.

First off, this is not a dig at electric charging networks. There are some good and some bad networks out there, but this is about correcting some misinformation of the charging solutions available to EV owners. Chargepoint should be ashamed of endorsing this article because they are otherwise a fine organization.

The network  came into focus this week because of GM’s PR push with the Chevy Bolt EV. The automaker invited a bunch of auto publications to take a road trip in the Bolt, but the trip was ~238 miles, which is achievable on one charge with the Bolt EV. No one talked about what happens if you need to do another ~200 miles after that. The TL;DR is that I’d probably not go, at least in a Bolt.

The solution to that problem is Tesla’s Supercharger network, but I will not go in details about it since Seth published a great article on the subject just yesterday: The very good Chevy Bolt reviews are in but everyone forgot to ask the most important question.

Now back to the ridiculous Forbes article. The author, Bertel Schmitt, made the claim that the Bolt has its own “Supercharger network”:

“The Chevrolet Bolt, along with the many upcoming longer range EVs by Nissan, Volkswagen, BMW, etc. etc. have their supercharger networks.”

On what is he basing this claim? The Bolt’s access to the ChargePoint network? Yes, that’s right. Schmitt is comparing the Tesla Supercharger network to ChargePoint’s network and purely on the size no less:

Now what Schmitt is not telling his Forbes readers is that out of those “more than 30,200 charging spots”, only 371 are DC fast-chargers, while all of Tesla Superchargers are DC fast-chargers. You can’t even begin to compare the two networks. Tesla DC-fast charging networks is not only several times bigger than ChargePoint’s, but also faster, placed better, has many more stalls per location, etc etc.  And, if you are counting level 2 networks you have to count all of Tesla’s destination chargers…and why are we comparing Tesla’s network with Chargepoint. Teslas can (AGAIN) charge at almost every ChargePoint network location.

But charging speed is apparently too complicated for Schmitt. Not my words. He wrote:

“I will leave the parsing by amperage, charging time, and place to the experts.”

How convenient. We’ll take it from here.

It’s basic arithmetic. Most Tesla Superchargers are rated at 120-135kW kW while ChargePoint’s are rated at 50 kW. That’s at least 2-3 times faster and it makes all the difference. The time you have to spend at chargers is just as important as the number of chargers – especially when we are talking about the difference between 20 minutes and an hour.

Schmitt made this really funny chart to immortalize his idiocy and for some reason, someone at ChargePoint (clearly not an engineer or someone with basic knowledge of charging systems work) thought it would be a good idea to retweet it: 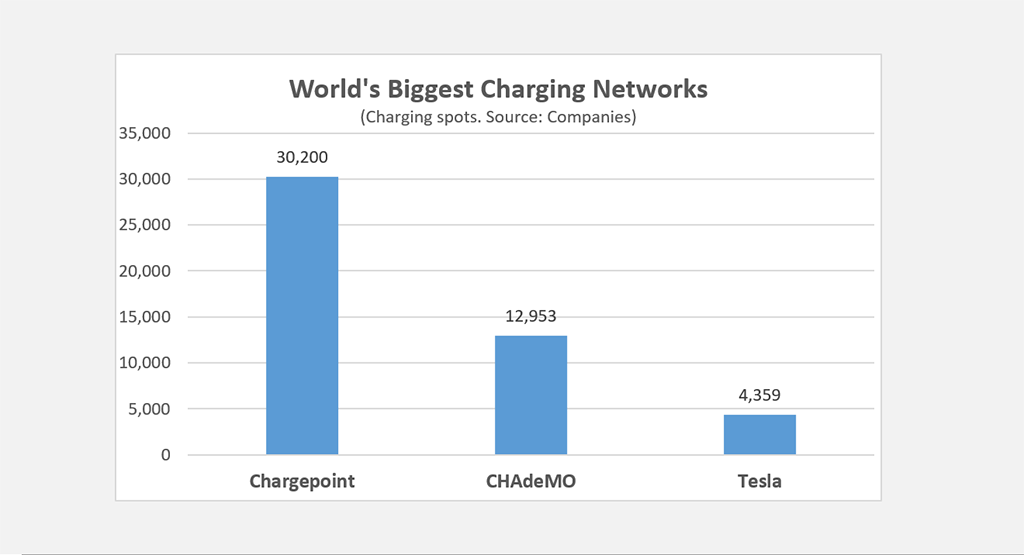 Since the vast majority of Chargepoint chargers are Level 2 and he didn’t count Tesla’s Level 2 (which are incidentally much faster) this isn’t a fair comparison. As of this week, Tesla’s Destination Charging network has 5,300 chargers at 3,100 locations worldwide with more site coming up every day, a Tesla representative told Electrek yesterday. It brings Tesla’s total chargers close to 10,000, not the 4,359 Forbes is propagating with Schmitt’s chart.

But it gets even more comical that he slaps CHAdeMO in here which is a charging standard. In fact, many of ChargePoint’s networks are CHAdeMO compatible! In fact, Tesla owners can use CHAdeMO stations with an adapter. It is the equivalent of comparing drink companies like Coke and Pepsi and having a 3rd category for carbonated beverages.

The point here is that Schmitt was trying to rile Tesla owners against ChargePoint without knowing that every ChargePoint station is beneficial to Tesla owners. With adapters, everyone can access those charge points if they decide to get the app or card. And that should be the takeaway here. We’re all in this together. Bolt, i3, eGulf, Leaf and Tesla owners. As an automaker, Tesla is definitely leading EV charging infrastructure, but there are a lot of independent networks out there that are beneficial to all EV owners.

It’s just extremely disappointing that ChargePoint would get on board with Forbes’ misinformation.

Get it together ChargePoint! Additionally, The author of the Forbes article is losing it on Twitter. He apparently still can’t make the difference between ChargePoint’s level 2 and DC fast-chargers, and Tesla’s Superchargers and level 2 Destination Chargers. Nor does he seem to understand that Tesla vehicles can charge on ChargePoint’s network…