In light of the recent smear campaign launched against Tesla and Elon Musk by a conservative group backed by a Trump propagandist, it’s worth taking a look at which companies involved in the same industries as Musk and Tesla are receiving the most public subsidies. After all, it’s the main aspect on which these smear campaigns are based.

The group ‘Citizens for the Republic’ targeted Musk and Tesla for taking subsidies from the government, which they referred to as “defrauding American taxpayers”. But according to their manifesto, they are against all subsidies, which is something a lot of people can get behind, but it raises the question of why are they targeting Musk and Tesla?

If you want to campaign against subsidies, it would make sense to target all subsidies or at least the corporations that are getting away with the lion’s share of them and contrary to what has long been reported, Tesla is actually receiving only a small fraction of what the Big Three automakers and oil companies are receiving.

Ever since the LA Times published an article last year titled ‘Elon Musk’s growing empire is fueled by government subsidies‘ claiming that his companies received $4.9 billion in government support, it has been used by detractors to associate subsidies to Tesla – including in the recent ‘Stop Elon From Failing Again’ campaign from Citizens for the Republic.

Musk suggested that the report, which was grossly misleading on some of the subsidies as explained in our breakdown, could have been planted to counter the IMF study that found that the fossil fuel industry was receiving the equivalent of ~$5 trillion in subsidies per year. He didn’t offer any proof of that, but both stories suspiciously came out around the same time.

According to Good Jobs First, a national policy resource center that logged over half a million subsidy awards given through 972 state and federal subsidy programs, Tesla should be the last company you should care about if you are worried about public money going to corporations.

Here’s the total value of subsidies and government loans that Tesla received since its inception according to Good Jobs First: 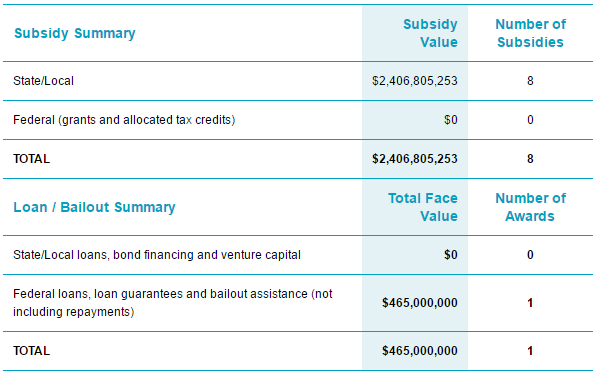 It would also be important to note that among those 8 subsidies totaling $2.4 billion, about $1 billion worth accounts for tax breaks over a 20-year period that started in 2014 when Tesla started construction on the Gigafactory in Nevada. Therefore, Tesla has yet to utilize those tax breaks and it will have to spend tens of billions of dollars in the state of Nevada over the next 18 years in order to fully take advantage of them.

Also, the $465 million figure listed in federal loan was repaid in full, with interest, early.

Those are the subsidies that Tesla received or could be receiving in the future.

Now let’s look at what other US-based automakers have received over the years. Here are the report cards for Fiat/Chrysler, General Motors, and Ford, in that order from Good Jobs First:

As you can see, it’s clear that the government has been subsidizing the ‘Big Three’ in a much more significant way than it has with Tesla, yet we can’t find a campaign called ‘Stop The Big Three From Failing Again’ from the Citizens for the Republic despite their supposed mission against public money going to corporations.

They seem much more preoccupied with ‘Stop Elon From Failing Again’ campaign and their fight against Tesla and SolarCity. Speaking of which, here’s SolarCity’s subsidy tracker versus Exxon’s:

While being against subsidies in general seems understandable, targeting specific companies seems disingenuous. Musk himself said that he would prefer if all subsidies, including the ones for his companies, would go away – but that includes the current subsidy on carbon emissions which takes the form of a negative carbon tax.