Tesla Supercharger was sabotaged, affecting route between LA and Vegas ahead of busy weekend [Updated] 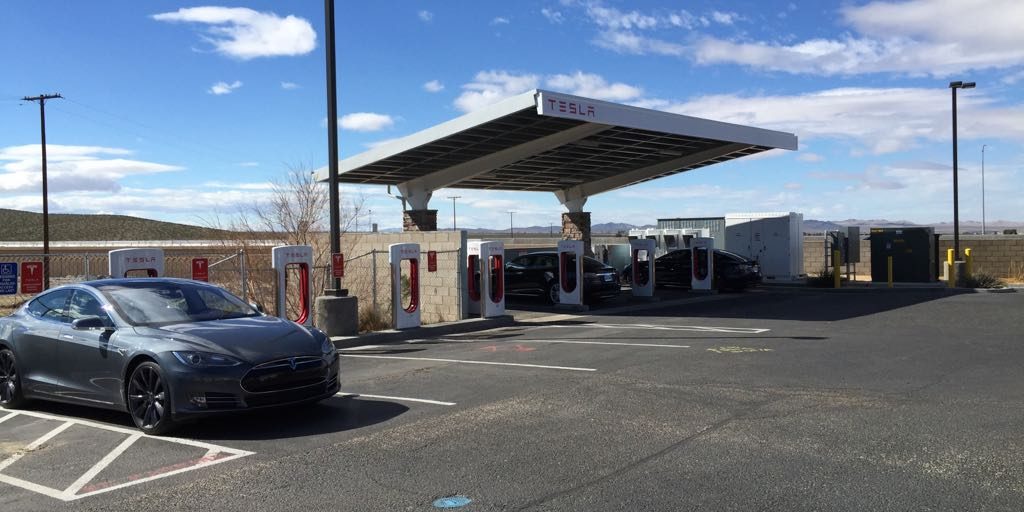 Update: Tesla confirmed to Electrek that the station is back online – sooner than previously anticipated.

Someone has sabotaged Tesla’s Barstow supercharger, just before the big holiday travel weekend. Whoever it was, they seem to have acted deliberately.

The supercharger seems to have been down since at least Saturday, per a post on Tesla Motors Club in the Barstow supercharger thread, but was working as of Thursday around noon per PlugShare checkins. Tesla is aware of the outage, but will likely not have the station up until the end of the month – after the big holiday travel weekend.

Tony Williams, longtime EV driver and owner of EV charging adapter provider Quick Charge Power, went and checked the damage.  He has posted some pictures of the damage, which is quite extensive, and suggests that the job seems to be a deliberate act by knowledgeable people with access to “commercial grade” tools – certainly more than just a “smash ‘n grab”.

There is currently no solid information as to the motivation behind the sabotage.  We don’t want to speculate as to that motivation, though we’re sure there will be plenty of speculation in the comments below.

Several owners in the TMC thread above have noted that the drive from LA to Vegas is still possible according to evtripplanner.com, and a few have confirmed this by doing the drive and stopping just at the Primm and Rancho Cucamonga superchargers – one owner used 76% of his S85’s energy from Primm to Rancho, which means the drive should be possible in anything but a 60kWh model with a little discipline (or, in the case of a 60, perhaps with a lot of discipline).  If you are considering the drive you should probably be sure to charge up to full before you leave the aforementioned chargers, and take it easy on the drive between them.  Remember that lower speeds will increase your range, higher speeds will reduce it.

Tesla is gradually working to put more superchargers at smaller distance intervals on highly-trafficked routes, which helps in situations like these.  Barstow was one of the original supercharging stations and used to be the only one which covered the LA to Vegas route, but now that the Primm and Rancho superchargers are open, this outage, while certainly a big deal for many travelers, does not make the route impossible. And even in the instance of supercharger outages, there are always slower chargers like CHAdeMO (which Teslas can use via an adapter) or RV hookups, which can be found through PlugShare or similar charge station apps.