Jaguar reveals new “I-PACE” all-electric SUV, looks like an F-Pace plus a little bit of Tron

We’ve covered reports that Jaguar was working on an electric SUV before, and today Jaguar officially revealed their SUV concept, along with their name for it: the “I-PACE.”  It’s largely modeled off of their recent “F-PACE” SUV, only Jaguar has taken the step of “electrifying” the design by giving it some future-y touches which are sure not to age well, but seems to be irresistible to automakers when jumping into the EV market.

While this design is still labeled as a “concept” – and as such, maybe Jaguar will tone down the “Tron lightcycle” looks a bit before release – Jaguar states that the car will hit the roads in 2018.  This seems exceedingly quick for an electric concept to make it to the roads, especially for a company with no other electric models yet.  But Jaguar has been signaling some seriousness about electric cars, particularly with their entry into this year’s Formula E championship.  There are no timelines yet for regional availability.

Of course, the I-PACE is already being compared to the Model X – it’s a long-range luxury SUV with some performance chops – but Jaguar calls it a “compact” SUV, like the F-PACE, and says that the I-PACE will be the first luxury all-electric “compact” SUV.  We do not yet know the price, but the F-PACE starts at $40,990.

As for comparisons between the two, the I-PACE is 14 inches shorter than the Model X, which puts it in a very different vehicle segment.  This is also reflected in their available cargo spaces – the I-PACE claims 18.7 ft³ of storage in the rear, quite small when compared to the new 5-seat Model X’s 88 ft³ of rear storage.  The I-PACE does have a fairly minuscule 1 ft³ “frunk” though, offering some storage in addition to it’s rear cargo capacity, and Jaguar has not released details regarding cargo space with the seats folded down. 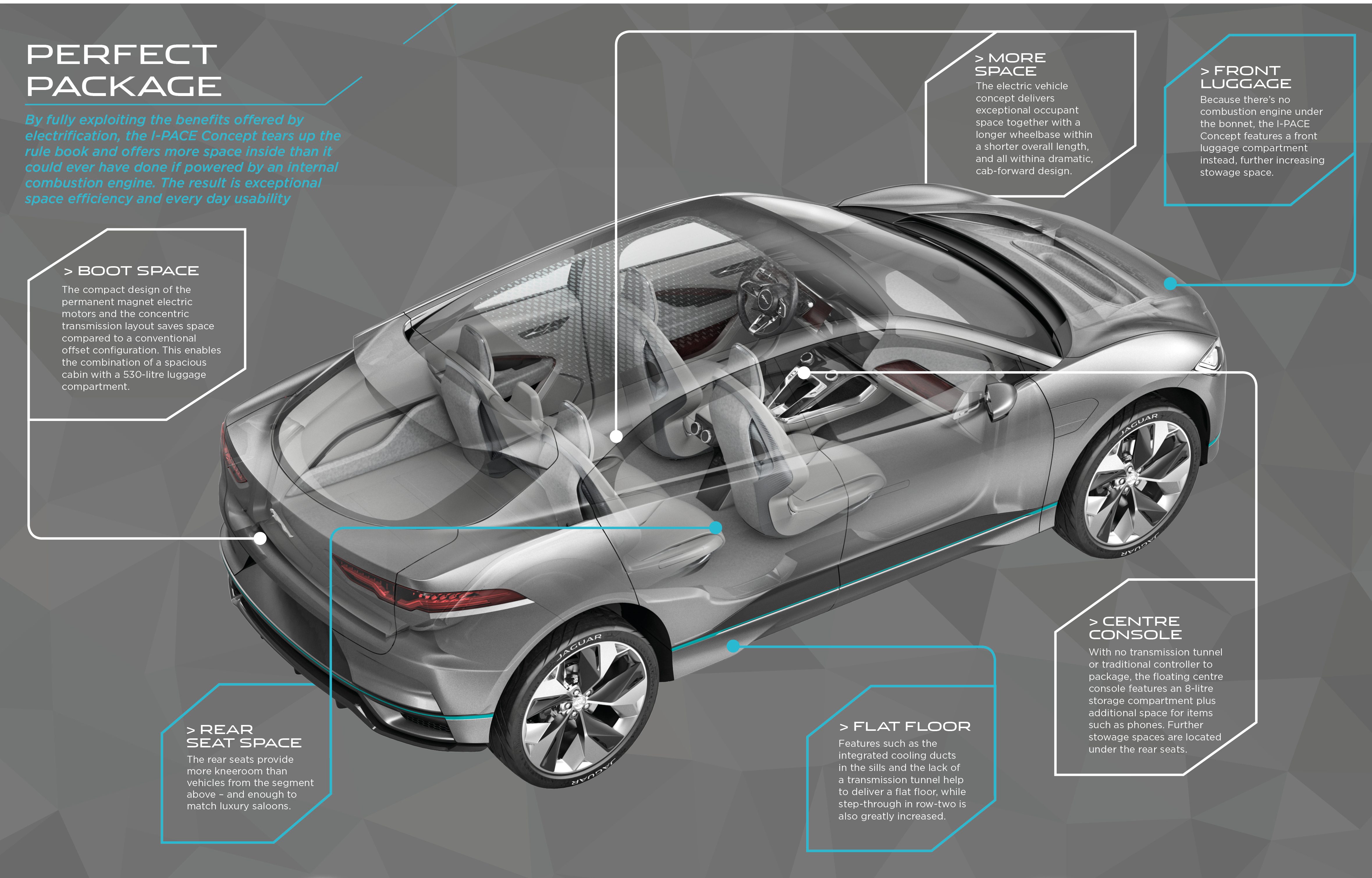 Jaguar claims the I-PACE will have just under 400 horsepower and be capable of 0-60 in about four seconds – certainly quick, but beaten significantly by the P100DL.  It has dual motor all wheel drive, much like the X, though it uses permanent magnet motors instead of Tesla’s AC induction motors.

It will also have a 90kWh battery pack and a very slippery drag coefficient, which Jaguar claims will lead to “in excess of” 220 miles EPA range.  Jaguar’s battery pack uses larger-format pouch cells – similar to many other automakers but significantly different from Tesla’s small cylindrical cells. 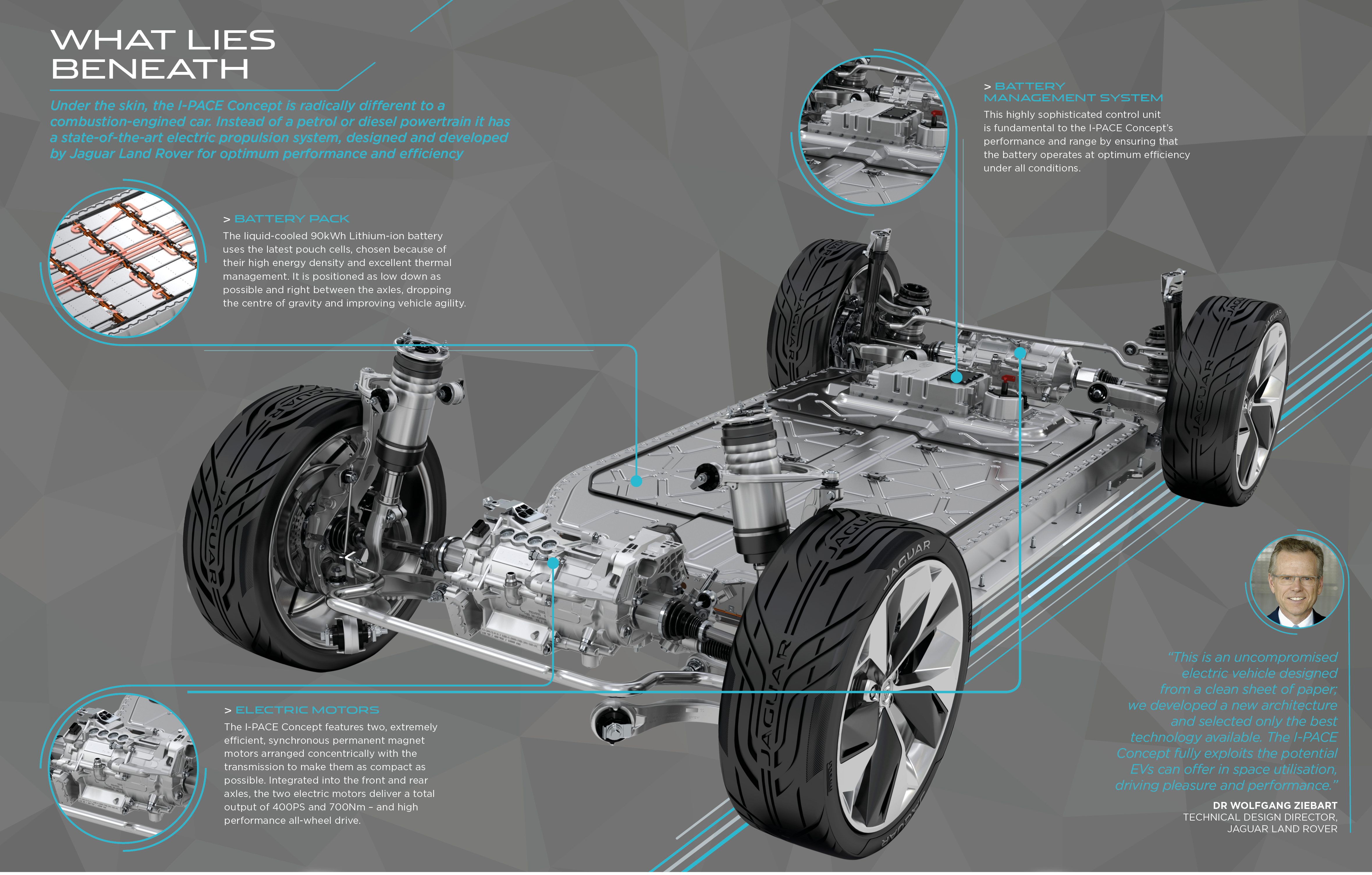 And it will be capable of DC quick charging at 50kW – much slower than the Model X, but in line with speeds achievable by other EVs.  This should lead to an 0-80% charge in approximately 90 minutes.  Jaguar did not provide details about whether they would be using CHAdeMO or SAE for DC charging in the US.

So perhaps it’s better to compare the I-PACE to the F-PACE?  As we’ve mentioned before, not every electric car is necessarily in competition with each other, and given that there are significant differences between the Model X and I-PACE, including, most significantly, their likely price, it seems more relevant to compare against the closest gas counterpart.

We don’t yet have pricing for the I-PACE, but it would be reasonable if the price was close to the F-PACE, especially after rebates.  The quoted performance numbers suggest it will be much faster than its gas-powered counterpart (0-60 in 5.4s vs. “about four seconds”) and clearly much more efficient (20mpg vs. a probable ~90mpge).

The dual motor AWD should offer better traction than the F-PACE’s four-wheel drive system as well.  And of course, the I-PACE wins in terms of electric convenience, with the advantage of charging at home instead of having to go to gas stations. 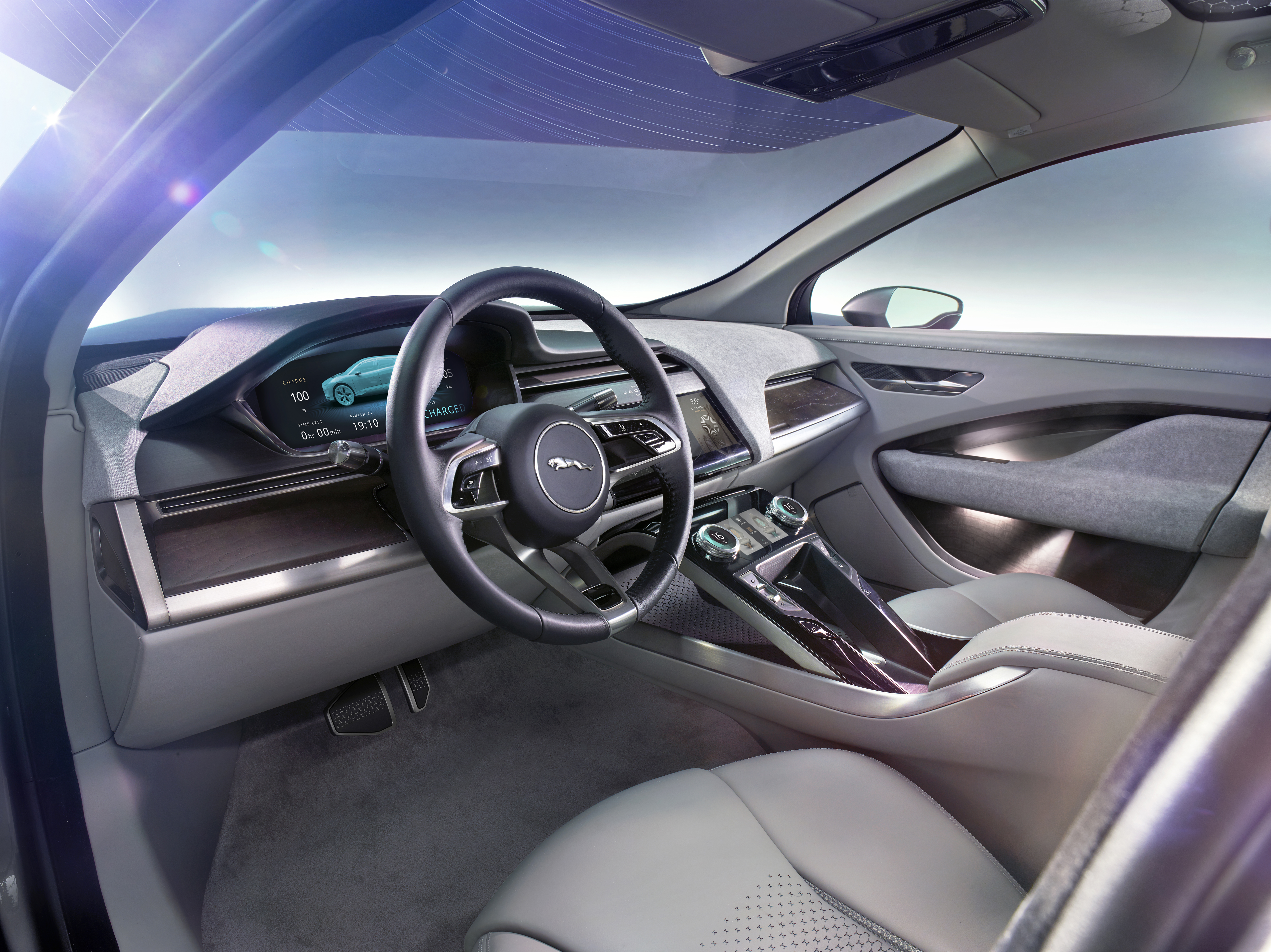 However, oddly, the cargo space in the F-PACE seems much larger (33 ft³ vs. 18.7 ft³), despite what Jaguar terms a “cab-forward” design philosophy in the I-PACE, which one would think should open up rear seating space and/or cargo capacity. Jaguar hasn’t provided full specs about cargo capacity with the seats folded down, so perhaps that will be a comparison for another time.

On balance, from the specs we have available to us, it seems the I-PACE will out”pace” (ugh, sorry) its gasoline counterpart. Now let’s just hope that Jaguar prices it right.

What do you think about the I-PACE?  Too Tron-y, or just Tron-y enough?  Tell us in the comment section below.