Tesla turns to in-car purchase with its software-locked features

Last month, we reported on the fact that Tesla now offers almost $20,000 in software-upgradable options when buying a vehicle since introducing its latest battery pack and autonomous features. As we speculated at the time, Tesla started advertising upgrading to the software-locked features through in-car purchases.

The new scheme appears to be building on Tesla’s free month Autopilot trial program for Tesla owners who bought the car without activating the feature. Directly from the center screen in their car, owners were able to activate the feature and try Autopilot convenience features for a month.

At the end of the month, owners were given the option to purchase the Autopilot convenience features at full price.

Tesla is now taking a similar approach, though without the free month trial, with an option for Model S 60 (and 60D) owners to upgrade to the full potential of their 75 kWh battery pack.

A Model S 60D owner in Indiana, Steve Sumichrast, was prompt with the following pop-up on the center screen of his car when he got in it this morning: 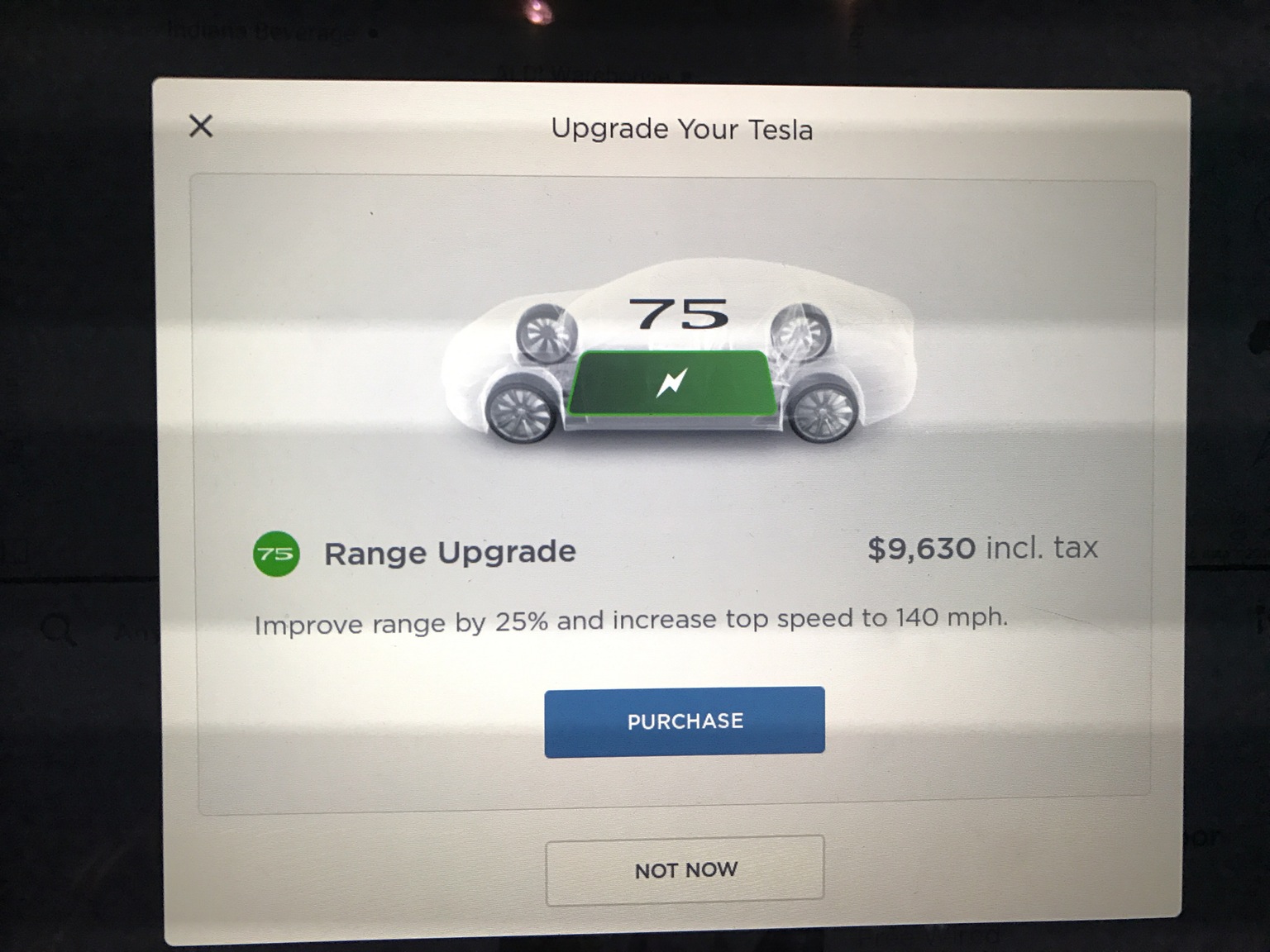 As you may know, Tesla sells the base version of the Model S with a 75 kWh battery pack, but software-locked at a 60 kWh capacity. It allows the company to lower the entry price of the Model S, but it also results in Tesla shipping 15 kWh of unpaid battery capacity.

Tesla apparently looks to recoup some of that money by selling the upgrades via over-the-air updates in the vehicles, but the strategy is sure to attract some criticisms and comparison to DLCs or micro-purchases in video games.

Most people know what they were purchasing. In the case of a Model S 60 D, like Sumichrast’s, it’s 218 miles of EPA-rated range and a top speed of 130 mph. Unless you’ve grossly misjudged your needs before purchasing, it’s hard to image Tesla could interest you in 41 more miles in a 10 mph faster top speed for roughly $10,000, but it also wouldn’t be surprising if Tesla manages to convince a few buyers.

The option could potentially be more successful for future owners on the used car market. Some say that it could spark a trend of hacking your Tesla to get access to the locked features – not unlike jailbreaking an iPhone.

What do you think? Annoying sales tactic or reasonable compromise to get a lower entry price? Let us know in the comment section below.