It has been rumored since the beginning of the year after ‘Tesla hacker’ Jason Hughes sent a cryptic message to Elon Musk over five months ago. Tesla enthusiasts have since been fantasizing about the potential performances of a P100D Model S or X. Last month, Tesla finally confirmed the new 100 kWh battery pack, which gives the ‘Quickest Production Car in the World’ title to the Model S P100D with Ludicrous Mode.

When the automaker officially announced the new top-of-the-line model, Tesla said that it was entering production and now almost 4 weeks later, those cars are making their way to Tesla stores and service centers.

Our many eyes at Tesla’s retail and service locations are reporting having spotted both Model S P100D sedans and Model X P100D SUVs in the parking lots and arriving on trucks in California over the past two days.

Tesla says that the Model S P100D with Ludicrous Mode will accelerate from 0 to 60 mph in just 2.5 seconds. We should start to see new acceleration videos as soon as Tesla starts deliveries. Not unlike when Tesla introduced the “Insane Mode” and the original “Ludicrous Mode”. 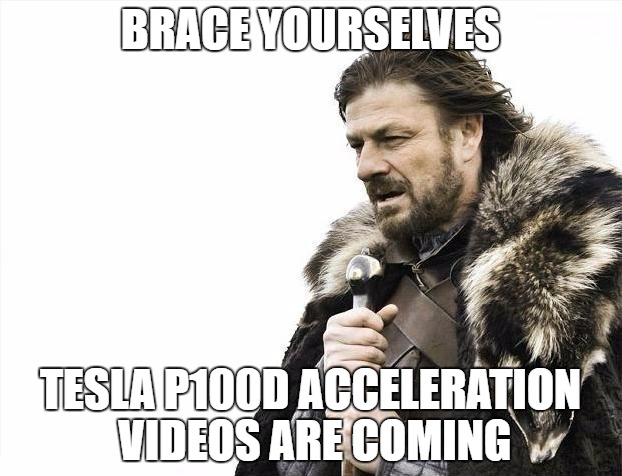 After announcing the P100D, Tesla CEO Elon Musk said that they should be able to produce as many as 200 100 kWh battery packs per week. He anticipates that the demand for the new vehicles will exceed the production capacity for the next few months and therefore, they do not plan to introduce a non-performance version of the pack until then.

A week after officially announcing the new vehicle, Musk sent a company-wide email to employees in which he urged them to “build and deliver every car they possibly can,” as he believed the company to be “on the razor’s edge of achieving a good Q3″ ending September 30. By good, he actually means a profitable quarter, according to the same email.

If Tesla employees are successful in delivering every vehicle they can, chances are that we should see quite a few P100Ds in the next few weeks.