Rich Heley was one of Tesla’s biggest hire and quickly rose in the executive ranks of the automaker. We broke the news of his hire back in 2013 when he was still leading Alloy Engineering at Apple. Now we learn that only 3 years later, the engineer, who until recently was Vice President of Product Technology at Tesla, is now leaving for Facebook.

Bloomberg broke the news reporting that he will be joining Facebook’s new hardware development group:

“Rich Heley, who was most recently vice president of product technology at Tesla, will report to Regina Dugan, a former Google executive whom Facebook hired in April to lead Building 8. A Facebook representative confirmed Heley’s hire, declining to give additional details.

Chief Executive Officer Mark Zuckerberg has said Facebook will be “investing hundreds of people and hundreds of millions of dollars” into the hardware effort over time, as he aims to increase the pace of innovation at the world’s largest social network. Building 8 specifically focuses on creating new hardware products with aggressive timelines, teaming up with universities and divisions at Menlo Park, California-based Facebook to build upon their science and software.”

According to his LinkedIn profile, Heley had a 10-year tenure at Apple before joining Tesla as Senior Director of Manufacturing Technology and quickly being promoted to Vice President. In his latest position, he was directly reporting to CEO Elon Musk. 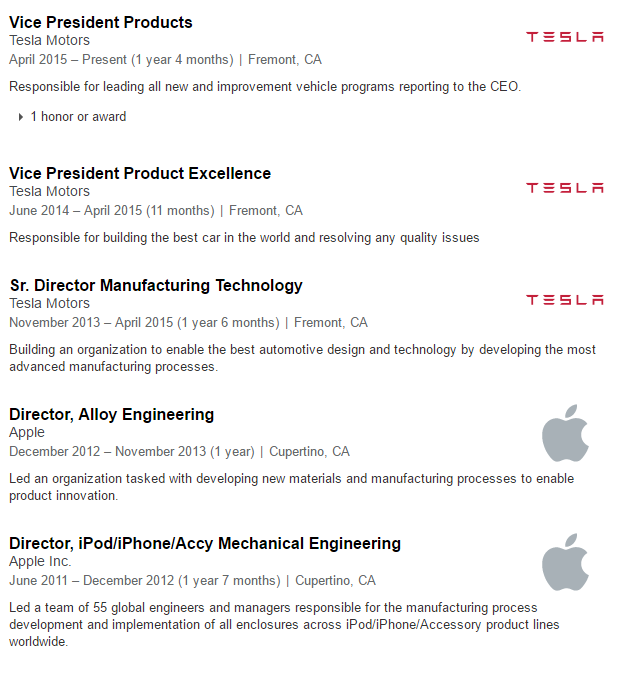 Interestingly, Heley was overseeing manufacturing processes and he had experience with CNC manufacturing. We discovered that earlier this year, Facebook hired several CNC programmers in Tesla’s hardware prototyping group prior to Heley joining the social network’s new hardware division.

Heley is leaving amid a restructuring of Tesla’s executive team in manufacturing. Earlier this year, the automaker hired Peter Hochholdinger, Audi’s Senior Director of Production behind the manufacturing programs of the A4, A5 and Q5 vehicles, to lead manufacturing at the company. He joined just as Josh Ensign and Greg Reichow, two top Tesla manufacturing executives, were leaving the company.

The goal is to make a reality of Tesla’s new build plan to significantly increase its annual vehicle production by 2018 to 500,000 units. Previously, Tesla was hoping to achieve the production rate in 2020, but accelerated the timeline in response to the higher than expected demand for the Model 3.