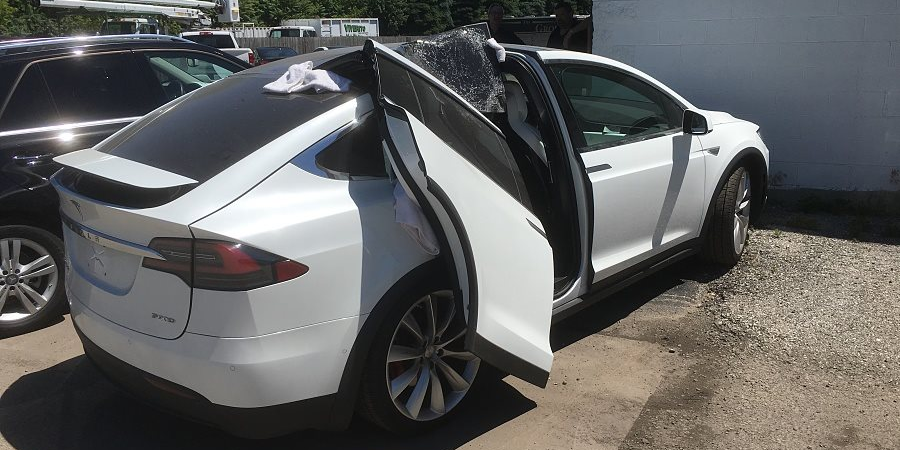 You can now drive the Tesla Model X with the Falcon Wing doors completely extended. Of course, it is not recommended and if you decide to do it, you will be met with both audible and visual alerts. It allows to quickly reposition the SUV for a better exit if needed and it’s a pretty cool party trick (as seen in the recent Chicago and SF pride parades), but other than that, it’s preferable to only open the doors when parked, especially when in a garage.

A Model X P90D owner in Lisle, Illinois found out the hard way after he broke one of the SUV’s wings on his garage door.

An archive of pictures of wrecked exotic vehicles shared the two pictures below with the mention:

“Forgot that the door was open when driving out of own garage. Nobody hurt. Spotted at repair shop.”

The information appears to have been relayed by the repair shop and the circumstances of the accident are not clear.

I know a Model X P90D has a lot of torque, but you need to apply a significant force to tear up the door like that. It’s hard to imagine applying enough force at a normal driving speed in a garage, but yet, it’s also difficult to imagine any other situation for an impact to result in only the door being damaged like that.

There are sensors on the doors that stop them from opening too high if there’s obstruction, but it doesn’t stop the vehicle when driving.

I’d be curious to learn the repair costs associated with replacing this door. Somehow I think it will be much more complex than the recent replacement of the Model X’s panoramic windshield that we reported on last week.