One of Tesla’s main advantages over other automakers is its capacity to send significant software updates over-the-air. Model S and X owners wake up in the morning and ta-da! They have new features in a vehicle they bought weeks, months or even years go, and Tesla’s next update will have something for everyone, whether you have Autopilot hardware in your car or even if you own a ‘classic’ pre-Autopilot Model S.

Electrek has learned all of the so far unreleased details of Tesla’s upcoming update 8.0 — one of its biggest to date. The automaker started testing the latest build with a limited number of owners and it features the most important UI refresh since the launch of the Model S, new Autopilot features and more…

It will be a particularly interesting update for Model S and X owners with the Autopilot convenience features.

When Tesla launched the first generation Autopilot, CEO Elon Musk said that future generations of the system will enable fully-autonomous driving, but the current generation will only allow ramp to ramp self-driving on highways and in parking situations due to hardware limitations.

While the Autopilot is not quite there yet, Tesla has been improving it with each new update and the 8.0 version brings the system one step closer to a virtually autonomous driving system on highways with the addition of automatic off-ramp with the turn signal.

Much like Tesla’s current automatic lane change with the turn signal when on Autosteer, 8.0 will allow drivers to command the Autopilot to take an exit by simply activating the turn signal.

It will certainly take some getting use to, but like the Autopilot’s other features, Tesla owners will need to learn to trust the system by staying vigilant and always being ready to take control.

Additionally, Tesla’s beta program says that the 8.0 is also introducing a more responsive Traffic-Aware Cruise Control and Autosteer for a smoother experience in traffic.

Now going into the UI refresh, there will also be a small update to the Autopilot-generated interface on the dashboard (current dashboard pictured above – we couldn’t get pictures of the 8.0 update). The models of the vehicles around the Tesla will now be displayed not only from behind but in any angle they are moving, like perpendicular to the Tesla or turning around a corner.

The dashboard display is really becoming a real-time representation of the vehicle’s surroundings through the eyes (sensors) of the Autopilot.

UI Refresh and Other Features

Tesla is referring internally to the 8.0 software update as the biggest update to the user interface since the launch of the Model S – bigger than the 7.0 update. It’s also Tesla’s first major UI update since its head of UI/UX left for competitor Faraday Future and more recently to work with Uber.

We will not get into all the new features and changes – leaving some surprises for when the update is pushed to the fleet – but here are some of the most interesting parts of the update in term of the user interface.

Voice commands have been significantly improved in 8.0 by removing the need to hold the button to use it and also by showing a transcript of what the system believes you said directly on the dashboard.

What will likely be perceived as the most noticeable change for Model S and X owners is the redesign of the map and navigation interface. It features an important refresh of the ‘turn list’ or actions required and a new routing based on energy capacity. The navigation and route planner can now also suggest alternative routes to avoid tolls and use different Supercharger locations.

Another aspect of the user interface being significantly updated is the media player. While Tesla owners in Europe have access to a Spotify app in the car, it looks like it’s not coming to the US or at least not in the Tesla 8.0 beta update.

You are still getting a convenient update with new shortcuts, TuneIn for popular podcasts and new search with filters by artist, songs, and albums. 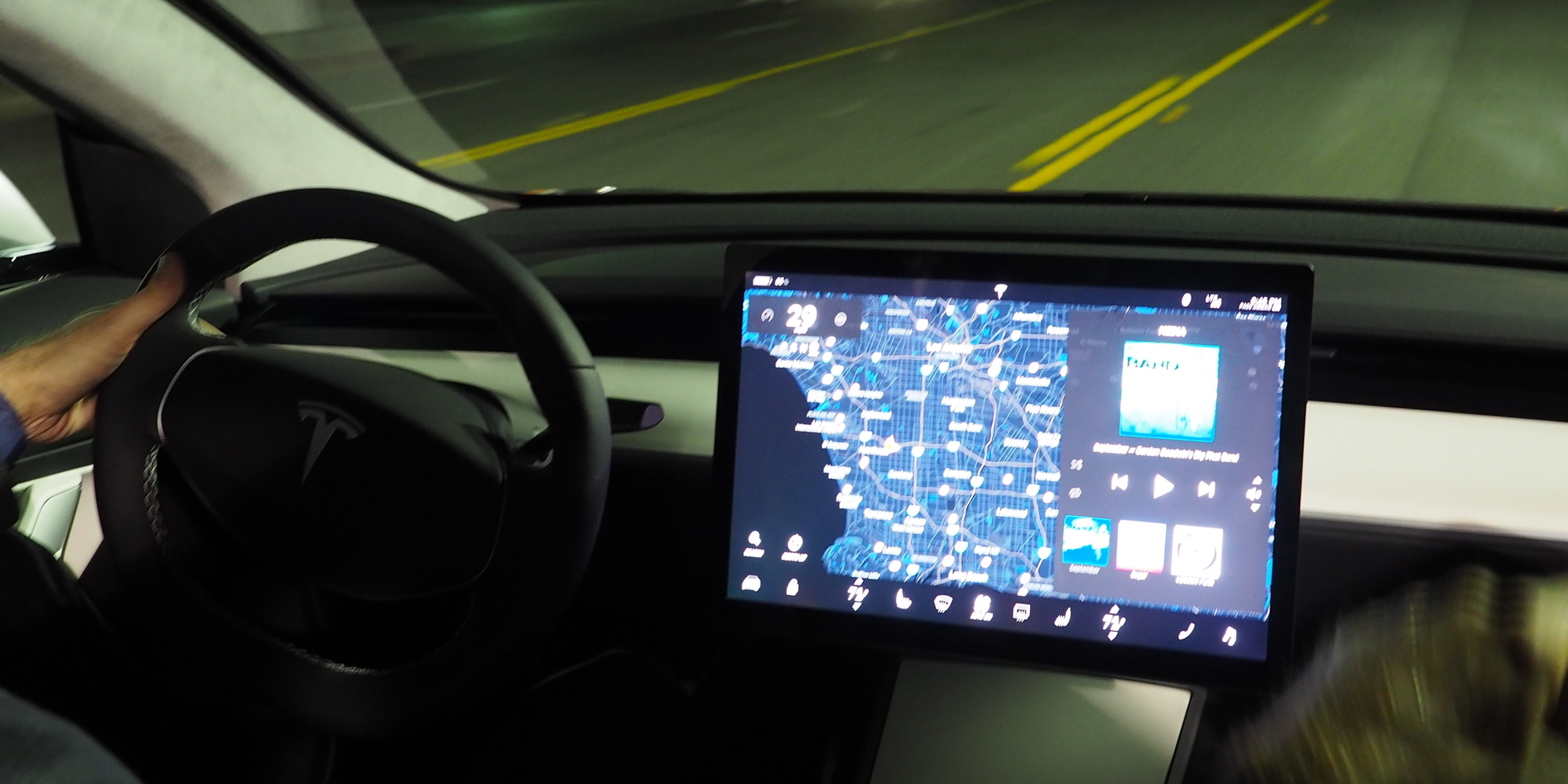 Tesla Model 3 display – TeslaOS V8.0 might take cues from this

The update is being tested in beta now, but it doesn’t necessarily mean that all the changes and features will make it to a wide release. As far as when that will happen, it’s anyone’s best guess. Based on past experiences, the wide release can be only a few weeks away or at most a few months from now.

As always, we will keep you updated as we learn more about Tesla’s upcoming 8.0 software update and hopefully we can report on some of the experiences from the first users.