‘Lithium’ battery capacity degradation is one of the main concerns of electric vehicle buyers and potential buyers. Since the resurgence of electric cars is relatively recent, meaningful long-term data on large battery packs is fairly rare. Only Tesla has battery packs with a capacity higher than 30 kWh on the road in any significant number and they only have been in operation for a few years (Roadster aside).

But a few Tesla owners have accumulated impressive mileage on their vehicles and the data provides an interesting look into potential battery capacity degradation.

The organisation added a few entries in the past months and now has data on close to 500 Tesla vehicles with a total of over 12 million miles driven.

Data shows that the Model S’ battery pack generally only loses about 5% of its capacity within the first 50,000 miles and then the degradation significantly slows down with higher mileage. Plug-in America’s data shows several vehicles with over 100,000 miles driven and less than 8% degradation.

Here’s the chart for reported battery capacity versus miles driven for each of the vehicles in the Model S survey:

Tesla’s vehicles come with a 8 years/unlimited miles battery warranty, the loss of battery energy or power over time due to normal battery usage is not covered under this warranty. The data points above would represent normal capacity loss over normal use.

The automaker is calling the offer the ‘Infinite Mile Warranty’. Tesla CEO Elon Musk when announcing the new program which also includes the drive unit:

“The Tesla Model S drive unit warranty has been increased to match that of the battery pack. That means the 85 kWh Model S, our most popular model by far, now has an 8 year, infinite mile warranty on both the battery pack and drive unit. There is also no limit on the number of owners during the warranty period.

Moreover, the warranty extension will apply retroactively to all Model S vehicles ever produced. In hindsight, this should have been our policy from the beginning of the Model S program. If we truly believe that electric motors are fundamentally more reliable than gasoline engines, with far fewer moving parts and no oily residue or combustion byproducts to gum up the works, then our warranty policy should reflect that.”

Battery capacity can be affected by several factors like frequent full capacity charging, periods of time uncharged and fast-charging. 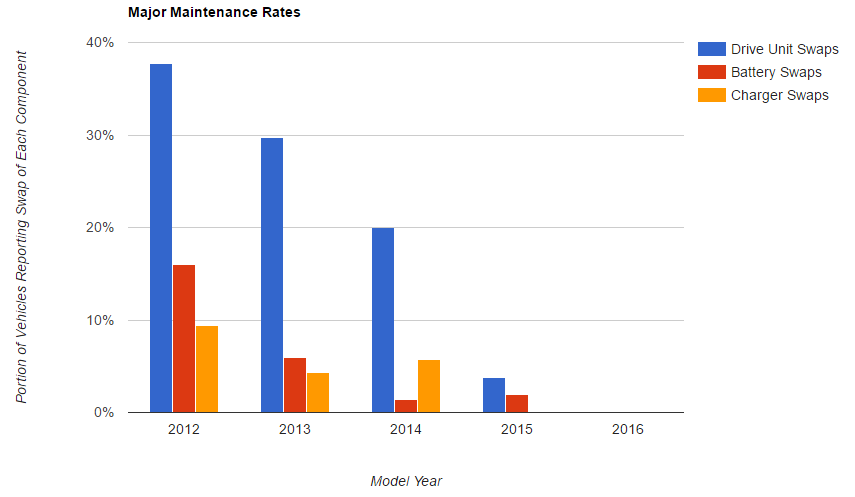 The early data is encouraging, but furthermore. Tesla is still working on improving its battery pack and cell technology. The company entered into a research partnership with Jeff Dahn’s battery-research group at Dalhousie University. Dahn specializes in li-ion battery cell longevity, which should be very helpful in achieving high mileage on battery pack with little capacity loss.

CEO Elon Musk once referred to a battery pack Tesla was testing in the lab. He said that the company had simulated over 500,000 miles on it and that it was still operating at over 80% of its original capacity.

Featured image: Reuters/Lucy Nicholson and other images via Plug-in America