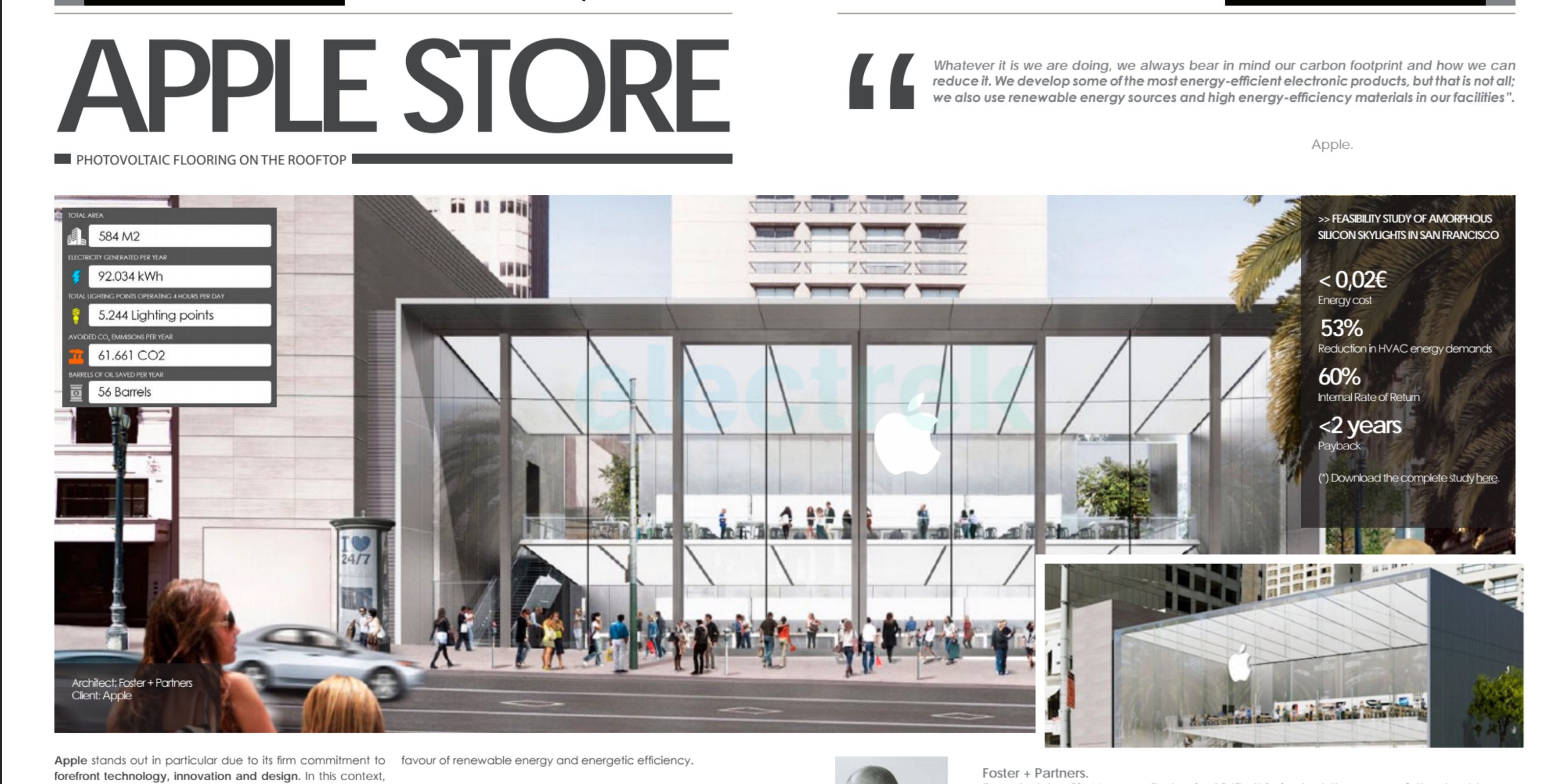 After our attempt at explaining the 500% markup on Apple’s new solar array yesterday, further information has now confirmed that Apple’s new stores – starting in the brand new San Francisco location – will be utilizing a new walkable solar glass floor technology for electricity generation. According to a document on Onyx Solar’s website, Apple “has decided to commit itself to OnyxSolar’s designer photvoltaic technology for its new stores. The first of these is located in the heart of San Francisco, the company’s home town.”

Apple, under the guidance of Tim Cook, has been very active in expressing its desire to be environmentally sound. The new Apple Campus and its Spaceship Office is going to be primarily powered by a monstrous 5MW solar power system. The San Francisco office’s  will be 100% renewable powered, with the 63kW solar system producing 92,034 kWh/year offsetting 61 tons of CO2.

And of course, Cook famously told investors questioning Apple’s renewable energy investments, “If you want me to do things only for ROI reasons, you should get out of this stock.” Integrating solar power directly into the structure of future Apple Stores would clearly align with Tim Cook’s saying, “We take the same innovative approach to the environment that we do with our products.”

If this technology replaced all the glazing on the One World Trade Center building in New York City, the windows could power more than 350 apartments.

According to the Professional Experience Book on Onyx’s site, the ‘rooftop walkway floor is comprised of 130 glass modules measuring 4.5m2 with a peak power capacity of 487Wp per unit, generating over 90,000kWh of power each year.’ The system’s total area is 584m2 . Onyx’s Technical Guide does not reference any solar modules that are 4.5m2 in size. On page 29 we do get technical specifications of a 6.0m2 ‘PV Glass Floor.’ However, this module is built with “a-Si Thin Film” technology – this type of product happens to NOT be the same as is noted in the Apple Store documentation on the Onyx website. Other area’s on Onyx’s website reference “Walkable Photovoltaic Roof/Floor” – there is no technical data on this page though. It would not be surprising if Onyx is building a custom product for Apple.

While only the project in San Francisco appears to be underway, language on Onyx’s literature about the store suggests that Apple could bring the new technology to future retail locations – possibly making the tech into a distinctive feature of new Apple Stores.

Communications have been sent to both Apple & Onyx asking for comments.