Though Hotz is contesting the DMV and says his prototype is currently only a “level-3” semi-autonomous car, but the cease-and-desist is still slowing him down as he now can only test the vehicle in a private parking lot.

On the other hand, comma.ai also secured some seed money from VC firm Andreessen Horowitz since coming out of stealth, bringing the startup’s valuation to $20 million according to a new profile by Forbes.

Three new coworkers also joined Hotz: Yunus Saatchi, who has a PhD from the University of Cambridge in artificial intelligence, Jake Smith, an expert in crypto-currency Bitcoin, Elizabeth Stark, another tech person involved in crypto-currency, and they plan to hire around eight more people by the end of the next quarter.

Hotz also received a visit from Nvidia CEO Jen-Hsun Huang who gave the startup $30,000 worth of Nvidia GPUs to power its self-driving Acura prototype.

The 26-year old hacker turned CEO is now describing his startup as a machine learning firm trying to turn artificial intelligence into commercial products, with the first product being an aftermarket autonomous or assisted-driving system, which he has the ambition to ship before the end of the year.

He aims to make the system compatible with at least the top five most popular cars in the US. comma.ai will have to keep up with another fledgling company, Cruise Automation, which also aims to bring an aftermarket semi-autonomous driving system to market, and last year, the startup hired Tesla’s former Autopilot engineering manager.

Hotz spent an afternoon with Forbes to demo the current build of his system:

When Hotz first unveiled his system he claimed he could soon “crush” Mobileye’s semi-autonomous driving system used in the Tesla Autopilot. He had discussions with CEO Elon Musk to build the system for Tesla, but it fell through after both parties couldn’t agree on a deal. Tesla has since commented on Hotz’s approach to self-driving, while referring to Hotz’s project:

“We think it is extremely unlikely that a single person or even a small company that lacks extensive engineering validation capability will be able to produce an autonomous driving system that can be deployed to production vehicles. It may work as a limited demo on a known stretch of road — Tesla had such a system two years ago — but then requires enormous resources to debug over millions of miles of widely differing roads.”

Following Hotz’s claim that he could build a “Mobileye crushing system”, Mobileye’s stock took a 7% tumble, which couldn’t even be helped by Tesla’s following reassurance that the Israel-based company’s technology was the best and that it plans to use it going forward. 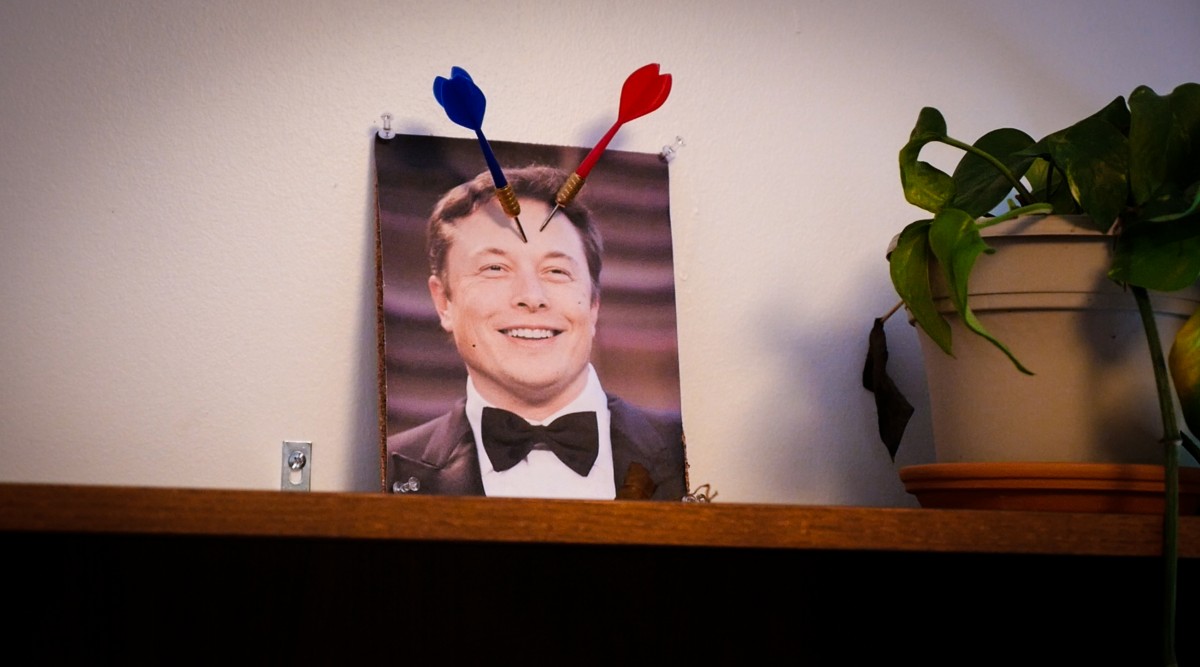 Funny enough, when Forbes went to Hotz’s house to film the video, they saw a note on a whiteboard in the basement that reads:

Hotz’s also had an Elon Musk dartboard with a few darts right in Musk’s forehead. Though Hotz aims for comma.ai to eventually become a software supplier for automakers and believes a deal could still be struck between him and Tesla for a self-driving car system, though at double the price he says…