Following the coverage of George Hotz’s new self-driving car project yesterday, the stock price of Tesla’s partner for the Autopilot, Mobileye, took a 7% hit during the day. Citron Research called the company “the short of 2016“.

But early this morning, Musk took to Twitter to say that Bloomberg’s article on the project was inaccurate and he shared a blog post from Tesla explaining why.

Ashley Vance wrote the Bloomberg article in question. You might remember Vance for writing a very popular biography on Musk earlier this year, which Musk also said contained inaccuracies, especially claims about his relationships with some of his employees. Vance claimed that Musk scolded an employee for missing a work event in order to attend the birth of his child. A claim that Musk denies.

At the time, Vance said he had emails proving his claim, but he only published an email in which Musk writes that he is disappointed in an employee, but without ever mentioning anything about child-birth or missing an event.

This time however, Musk didn’t directly address the email between him and Hotz regarding the possibility of Hotz coming to work for Tesla to develop a system to replace Mobileye’s, but in a blog post, Tesla reassured that they plan on using Mobileye’s technology “going forward”, especially its EyeQ chips, and expressed doubts about Hotz being able to deliver such a system by himself or with limited resources.

Vance reported in his article comments from Hotz about Mobileye:

“It’s absurd. They’re a company that’s behind the times, and they have not caught up.”

Tesla defended the company saying that “their part is the best in the world at what it does and that is why we use it”. Tesla also took offense in Vance’s following comment:

“Tesla, in particular, has done a remarkable job remarketing the Mobileye technology by claiming its cars now ship with “Autopilot” features.” 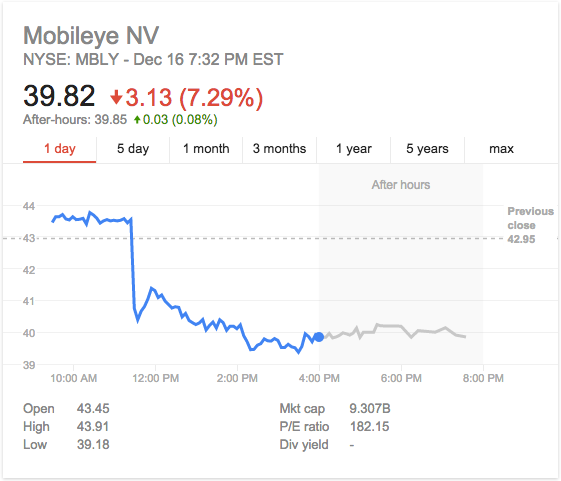 Mobileye confirmed that Tesla is building features on top of its technology, for example, the Autopilot’s self-learning capacity was implemented by the automaker. But as for the hardware suite, Mobileye is known to sell very similar packages as the ones found in Tesla’s cars. Of course, Tesla would have to integrate the technology and made possible design changes to adapt the hardware to the reality of its vehicles. The company references only Tesla’s “design” and “development” of the Autopilot in the blog post, indicating that Mobileye could be mainly a manufacturing partner for the company, but at this point there’s still some ambiguity about who made what.

Correction to article: “The First Person to Hack the iPhone Built a Self-Driving Car”

The article by Ashlee Vance did not correctly represent Tesla or MobilEye. We think it is extremely unlikely that a single person or even a small company that lacks extensive engineering validation capability will be able to produce an autonomous driving system that can be deployed to production vehicles. It may work as a limited demo on a known stretch of road — Tesla had such a system two years ago — but then requires enormous resources to debug over millions of miles of widely differing roads.

This is the true problem of autonomy: getting a machine learning system to be 99% correct is relatively easy, but getting it to be 99.9999% correct, which is where it ultimately needs to be, is vastly more difficult. One can see this with the annual machine vision competitions, where the computer will properly identify something as a dog more than 99% of the time, but might occasionally call it a potted plant. Making such mistakes at 70 mph would be highly problematic.

We should also clarify that Tesla’s autopilot system was designed and developed in-house. Were this simply a matter of repackaging a vendor’s technology, as claimed in the article, we would not be unique in offering this groundbreaking experience in production vehicles. If other car companies could meet or exceed the Tesla product by buying an off-the-shelf solution, they would do so.

Tesla Autopilot includes radar, ultrasonics, GPS/nav, cameras and real-time connectivity to Tesla servers for fleet learning. Going forward, we will continue to use the most advanced component technologies, such as MobilEye’s vision chip, in our vehicles. Their part is the best in the world at what it does and that is why we use it.