According to Nasdaq’s latest short interest update, the total short position on Tesla’s stock increased to 27,367,931 shares – its highest since March 2014. The short position is almost as important as Tesla CEO Elon Musk’s own stake in the company: 28,371,342 shares or about 29% of the float.

Musk and Tesla have a rich history with short sellers. During an interview with FOX in September 2012, Musk warned that anyone holding a stock position against Tesla Motors will have a “tsunami of hurt” coming for them. During the 12 following months, Tesla’s stock price increased by 461%.

Tesla’s most important share price increases have often been linked to short sellers covering their positions after a catalyst pushed the stock higher. Most notably, after the company reported its first profitable quarter in 2013.

Here’s a chart following Tesla’s share price and short interest over the past 2 years: 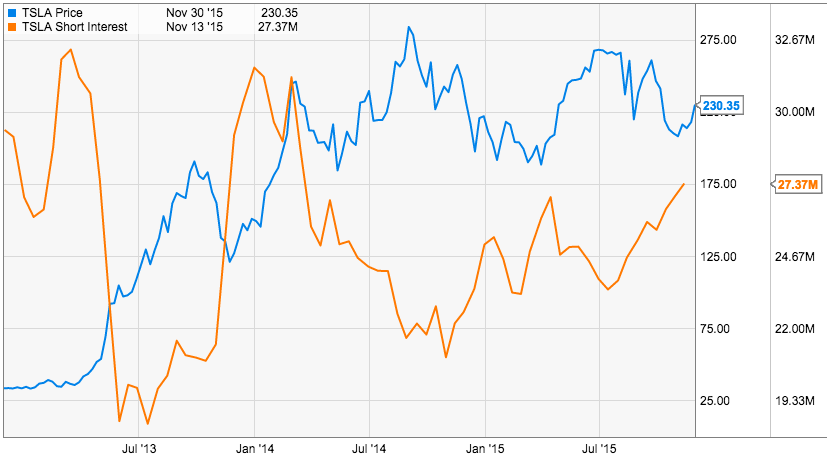 There are a few events in the coming months that could turn into catalysts (positive or negative) for the company depending on how they deliver on expectations. A few days after New Year’s Day, Tesla’s will report deliveries for the fourth quarter which is its most ambitious to date with guidance of 17,000 to 19,000 units.

Achieving the higher-end or even just meeting the guidance would be an important statement of the company’s potential production output for 2016. Either way, once the delivery number is out, the focus should shift back to the long-term story of the company as recently mentioned by Credit Suisse in a note about Tesla. The Model 3, which is set to be unveiled in late March 2016, is likely to be part of this long-term conversation.