Tesla Motors uses quite a few robots on its assembly lines. Earlier this summer, the company was completing its second assembly line and CEO Elon Musk confirmed 542 robots will be working on it, including 15 operating simultaneously at the central assembly point.

The company even named some of the robots after superheroes from the comic book series X-Men thinking it would make the impressive machines less formidable. Now we learn that Tesla has a R2-D2 robot from Star Wars delivering parts to workers at the company’s factory in Fremont, California.

R2 is not fixing Luke Skywalker’s X-Wing or delivering an important message from Princess Leia, but instead carrying parts from station to station on Tesla’s assembly lines. 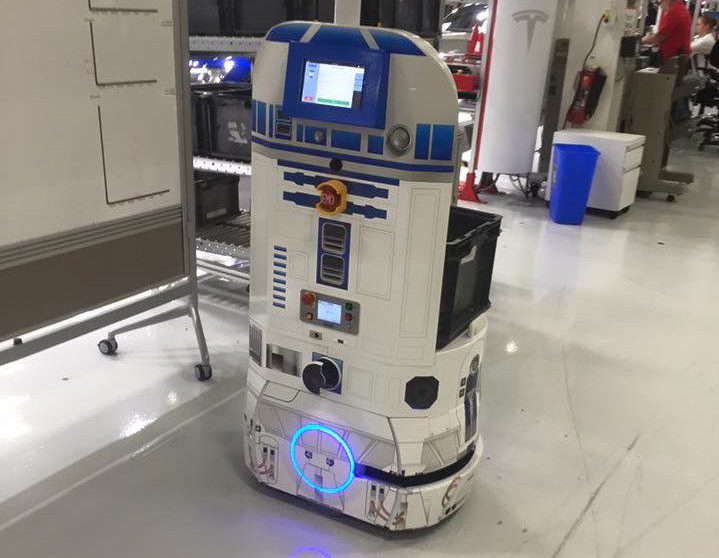 Shared on Imgur by user pornymcgee

From the Imgur description of the picture:

A buddy of mine at the Tesla factory send me this. This little guy delivers parts to the assembly line, they decides to dress it up. According to my friend people and cars yield to it like it’s some kind of God. He hates Star Wars.

Hate is a strong feeling to have toward Star Wars, but anyway, the end result is impressive. With the new Star Wars trailer, which came out yesterday, and Halloween coming up, the timing couldn’t have been better for R2 to start patrolling Tesla’s factory.