Elon Musk, being busy running Tesla and SpaceX, decided to open-source the concept. A group of ex-SpaceX engineers, venture capitalists and other tech veterans didn’t waste any time and created Hyperloop Technologies to try to make the project a reality.

Shervin Pishevar, managing director at Sherpa Ventures, and Brogan Bambrogan, aerospace veteran and former SpaceX engineer, co-founded the company and raised $8.5 million through a round of financing led by Sherpa Ventures and Formation 8.

Even though Musk is said not to be directly involved with the group, some of the board members and co-founders are known to be close to him. Pishevar, a naturalized American and famed investor known for his investment in Uber, is said to have encouraged Musk to publish the Hyperloop concept. Bambrogan was an early employee at SpaceX. David Sacks is co-Chairman of the board and he was COO at Paypal, a company Musk founded. Peter Diamandis has a seat on the board and he is CEO of the X PRIZE Foundation, of which Musk is a board member.

Making the Hyperloop a reality is an enormous undertaking. Beyond all the engineering problems in need of solutions, a project such as the Hyperloop, which in term of magnitude can be best compared to a high-speed train project, needs a lot of money and political influence. This is where Hyperloop Technolgies shows promises.

On the financing side, Pishevar, who already participated to the company’s seed round, said he could contribute up to $40 million to the next financing round which will aim to raise $80 million later this year according to Forbes. The investor also stands to make a lot of money if/when Uber goes public. He hinted at using the money to finance Hyperloop Technologies.

On the political side, the company got Jim Messina on board. Messina is a political adviser who was the Deputy Chief of Staff under Obama (2009-2011) and he oversaw the president’s reelection in 2012 as his campaign manager. Pishevar briefed the president on the Hyperloop project during a meeting at the White House and according to Pishevar, president Obama promised to read Elon Musk’s white paper.

Back in September, the group also briefed Harry Reid, US senator from Nevada and Senate Minority Leader. Reid introduced Pishevar to Anthony Marnell, an entrepreneur and CEO of the Rio Hotel & Casino. Marnell and his associates invested $50 million in XpressWest which owns a 190 mile right-of-way for a high-speed train between Las Vegas and Los Angeles. According to Forbes, the two companies are in negotiations to use right-of-way for the Hyperloop. 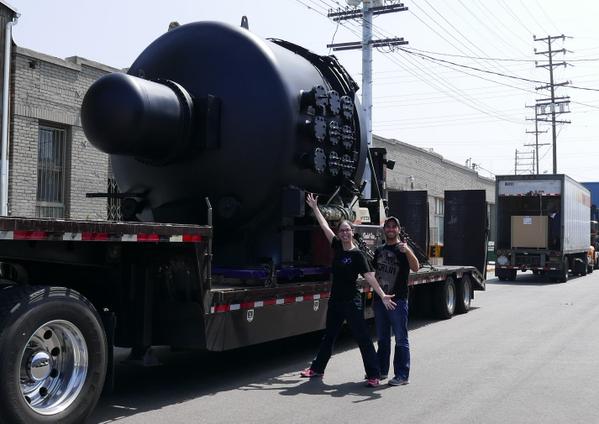 Along with trying to secure a location for the first Hyperloop, the company is also currently developing the technology that will make this “fifth mode of transport” possible (you can see their new vacuum chamber in the picture above).

Hyperloop Technologies (HT) is not the only company building tech based on Elon Musk’s idea. The confusedly named Hyperloop Transportation Technologies, inc. (HTT), is a crowdfunded company of more than 200 engineers working part-time on a Hyperloop project. There’s also Musk and SpaceX who recently announced that they will build a 1 mile test track along the SpaceX headquarters in Hawthorne, California. Although this project is for the SpaceX Hyperloop Pod Competition and is not meant as a commercial endeavour, but only to encourage the development of technologies related to the Hyperloop concept.