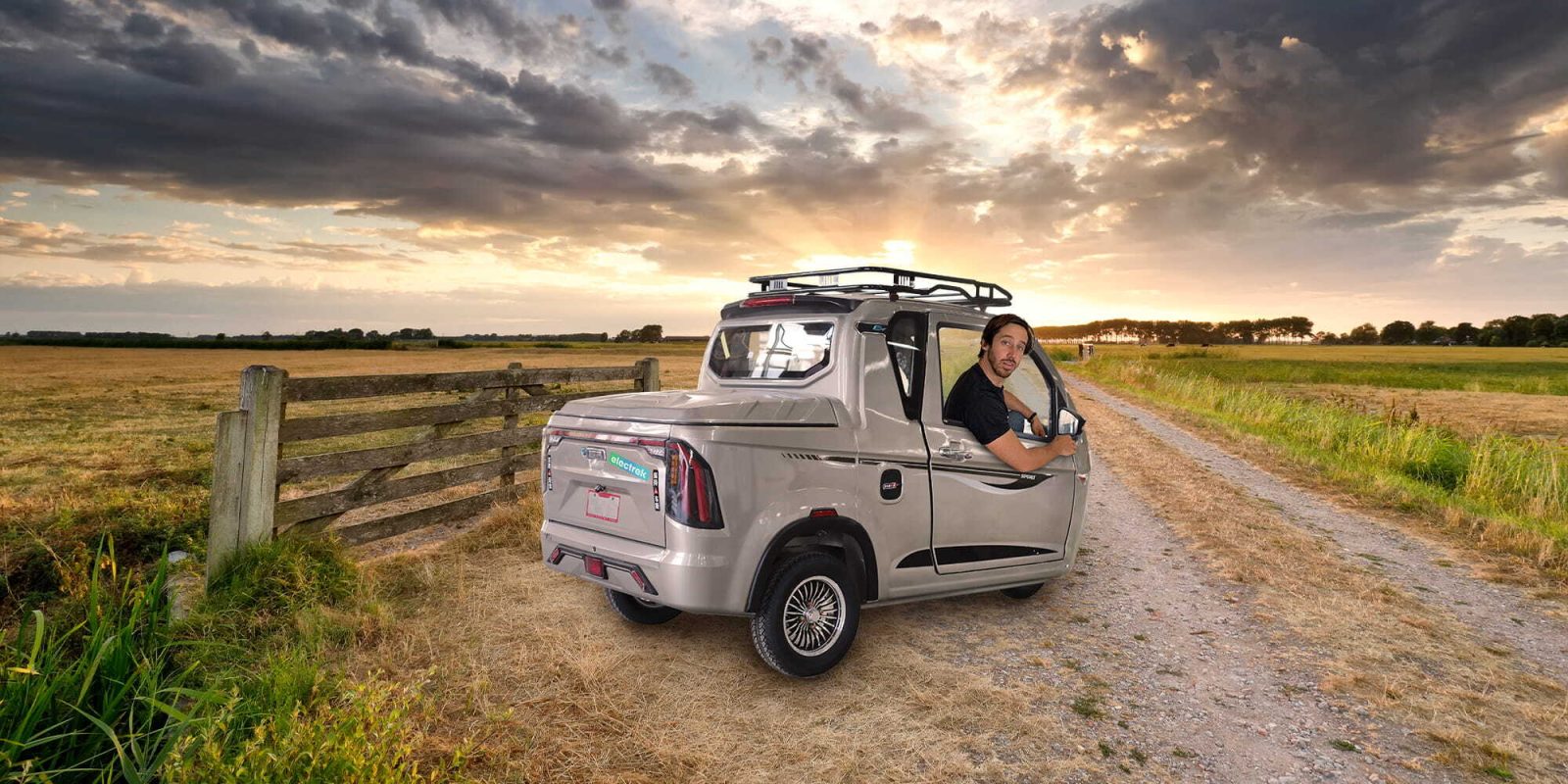 There are major movements toward reducing the size of cars and trucks in favor of lighter and more socially responsible vehicles that are less likely to take out an entire school bus while the driver is texting. As admirable as that concept is, I think this three-wheeled electric truck from China’s largest shopping platform might be a bridge too far for some people.

But who cares about them?! I love it, and that makes it perfect for my recurring Awesomely Weird Alibaba Electric Vehicle of the Week column!

There’s just something glorious about this three-wheeled electric pickup truck. Like an iconic mullet, it’s business in the front and party in the back.

There’s a fun little bed topper to keep your cargo dry, and there’s even an extra cargo rack on top of the cab’s roof. That roof rack would probably be an $800 option on an American truck, but it’s included in this little Chinese rendition’s $1,760 price!

For that price, you’re really getting a lot here. The cab is fully enclosed with two doors and a windshield, plus there’s a windshield wiper (but just the one).

There’s even seating for three people, including the driver. The front seat is a one-person affair, but the rear bench can fit two adults, as long as they are comfortable sharing each other’s personal space.

The little electric trucklet rides on three aluminum wheels and claims to offer independent double wishbone suspension up front, but perhaps they have different terminology for “suspension fork” in China.

I can overlook the slightly misnamed specs because of the sheer number of creature comforts we have here. There’s an infotainment system with reverse camera functionality in the screen, central locks, push-button start, power windows, a skylight, an electric heater, and an optional air conditioning unit!

The controls might take a bit of getting used to, at least if you come from a more traditional pickup truck. If you’re a motorcycle rider, though, you should feel right at home. That’s because you’ll find a set of handlebars instead of a steering wheel!

As usual with these odd Alibaba electric vehicles, the performance specs aren’t exactly legendary. The 60V system powers a 1,500W motor, meaning you’ve got a measly two-horsepower at your disposal.

Speaking of disposal, the 6 kWh of lead-acid batteries aren’t the peak of battery technology and will probably need to be chucked after a year or so of heavy use.

I’d go ahead and swap those out for some nice LiFePO4 battery packs, though you could probably spend nearly as much on new lithium batteries as you spent on the entire trike truck.

It would definitely be worth it, though, for the peace of mind of having some better-quality batteries in there that will last for years. And while we’re making modifications, I’d love to see a solar panel added to the top of the cab or even on that bed topper. I’ve been getting my DIY solar projects on lately, and this one is definitely asking for the sun-charging treatment.

I’m not holding out hope that this trike truck will replace my own Chinese mini-truck anytime soon, but I wouldn’t mind making some room in the garage for it as an addition to the collection!