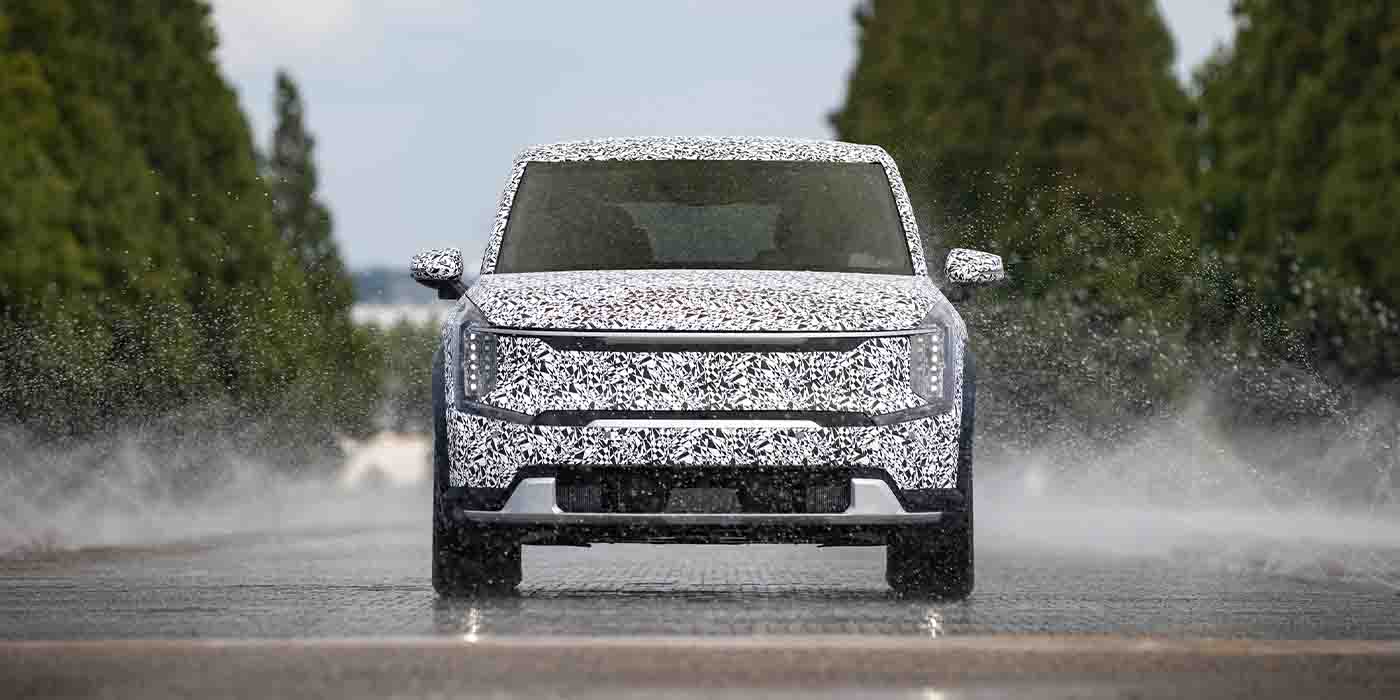 Kia continues to tease the public with its EV9 SUV – the automaker’s next all-electric vehicle to join the lineup as a competitor to SUVs like the Rivian R1S. The camouflaged version of the EV9 can be seen enduring final testing before it makes its global debut next year. Here’s the latest.

The Kia EV9 will emerge as the second all-electric model donning the Korean automaker’s new “EV” series nomenclature. It is preceded by the EV6 crossover, which hit the market earlier this year and has been met with positive feedback from consumers with its roomy interior and advanced charging tech thanks to Hyundai Motor Group’s 800V E-GMP platform.

At the LA Auto Show last November, Kia and Hyundai showcased several concept EVs that will eventually sit atop the E-GMP platform, which included the EV9 – an all-electric full-size SUV.

Kia expects new models like the EV6 and EV9 to significantly contribute to its overall sales and aims to sell 807,000 units in 2026, followed by 1.2 million in 2030. As the global debut of the EV9 approaches early next year, Kia has shared an update to its progress. Have a gander.

As you can see from the latest images above, the Kia EV9 appears on track (no pun intended) to begin production next year and is expected to arrive as a game changer for not only the automaker, but for the electrified SUV segment as well.

According to Kia’s latest press release, camo’d versions of the EV9 have been undergoing their “final intensive testing program,” pushing the SUV to its limits of durability. Per the release:

During this final testing phase, the EV9 is relentlessly subjected to a grueling verification program. Testing on a 4WD climbing hill and rough terrain tracks, as well as deep-water wading, will ensure maximum reliability even in the most challenging conditions. Kia’s high-speed, handling, and low-friction tracks place every element of the EV9’s performance and roadholding under the strictest scrutiny. At the same time, ‘Belgian pavé’ cobbled road surfaces enable Kia’s engineers to subject the EV9’s ride comfort and build quality to the harshest possible trials. In addition to the test program at Namyang R&D centre, like every Kia model, the EV9 has also been subjected to a punishing testing regimen in locations all over the globe.

The upcoming SUV was developed over the course of 44 months and will include features vital to compete in the blossoming large EV segment today. This includes all-wheel drive, third-row seating, and plenty of cargo space (to what extent must be confirmed).

When it debuts in Q1 of 2023, we can expect the EV9 to offer a counter option to the Rivian R1S SUV, which is slowly but surely rolling out deliveries among supply chain and assembly efficiency issues over at Rivian HQ.

While the R1S could easily be considered one of the best SUVs ever made to date, its MSRP starts at a lofty $78,000. Kia has not yet shared pricing for the EV9, but we’d expect the automaker to try and deliver its own SUV option at a lower price point for consumers.

We are certain to learn more following the global debut on the Kia EV9 in 2023. Circle back with Electrek for the latest.