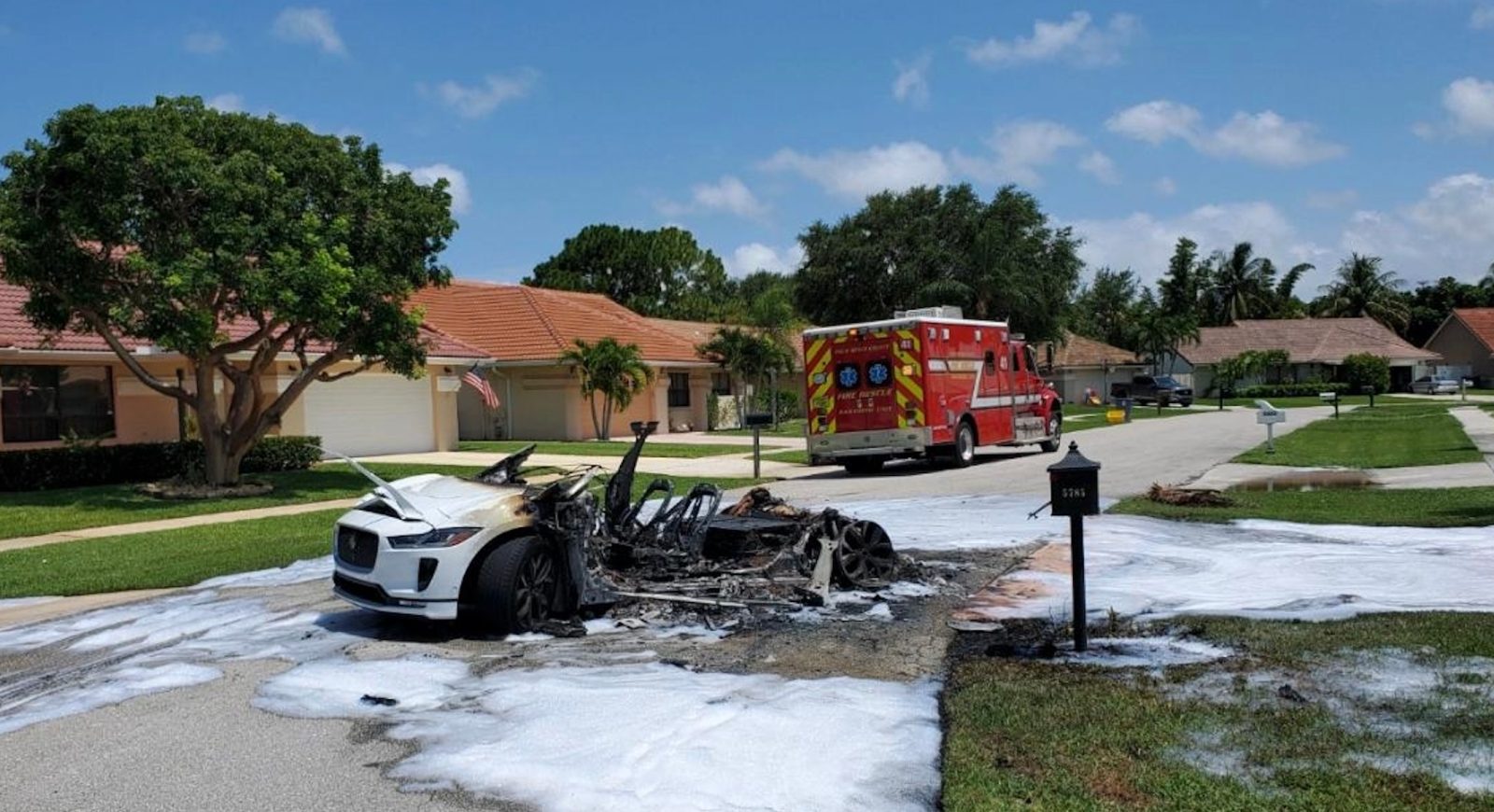 Another Jaguar I-Pace battery caught on fire without any crash after simply sitting charging in a garage. This is the fourth known I-Pace battery fire that seemingly started on its own, which is starting to be significant considering the relatively small number of units on the roads.

Jaguar also uses LG battery cells like the Bolt EV and Kona EV, which were both recalled for battery fire risks. Is this another Bolt EV battery fire situation?

The I-Pace is Jaguar’s first and only all-electric vehicle.

It came out in 2018, and we positively reviewed the vehicle for its sporty design in addition to its decent range and charging capacity at the time, but that was a few years ago.

The vehicle has barely been updated over the last four years, and it is now showing its age. But now, there might an even bigger issue with the electric SUV.

In 2020, Gonzalo Salazar bought a new 2019 Jaguar I-Pace in Florida; he had been driving the electric car without issue for a few years until an incident in June 2022. Salazar described the incident in an email to Electrek:

On June 16, I plugged the car in before going to bed. In the morning of June 17, I woke up and unplugged the car. Later that morning, I set out to run some errands. I drove about 12 miles that morning before returning back home and parking the car back in the garage, leaving the garage door open. As I was doing things at home, I heard pops coming from the garage. I decided to go see where the sounds were coming from, and upon walking into the garage, I faced a thick wall of smoke. My thought immediately was, ‘When there is smoke there is fire,’ and I need to get the car out of the house garage.

Wanting to protect his home and his animals living there, Salazar decided to see if he could get the I-Pace out, even though it was smoking. Surprisingly, he was able to get from his garage to the residential street in front of his house.

I went back to the house to get my phone and also noticed that all the smoke in the garage now had filled my entire house because the A/C unit is right next to the garage door. While I was trying to ventilate my house from the smoke I called Jaguar roadside assistance to have them come get the car. When I ended the conversation with them there were more pops, but this time it was followed by fire from under the car. I then called 911 to come help with the situation. But this was not a slow burn, once the fire started there were multiple pops, and the car was just engulfed in flames rapidly.

Here’s a video that Salazar’s neighbor took of the vehicle once it was fully engulfed in fire:

The fire department showed up and poured flame retardant foam on the vehicle until the fire was extinguished:

There were debris flying everywhere so I kept my distance. After the fire department poured a special foam fire suppressant for what seemed a long time, the car was still making a humming sound coming from the front of the car.

Salazar shared some pictures of the aftermath with Electrek:

Salazar was not impressed with how the aftermath of the incident was handled. Jaguar came and picked up what remained of the car, but he was left with having to clean up a lot of debris on the street himself.

Then came the investigation into the fire. Salazar told Electrek:

My insurance company sent a forensic specialist, did their investigation, and declared the car a total loss. Jaguar on the other hand is not being helpful at all, stating they need to complete their own investigation, but because of the risk of igniting the fire once again, they are unable to find a place where they can lift the car up, therefore their “investigation” is on hold, and they are not taking any responsibility for what happened.

The media often bring unwarranted attention to electric vehicles, especially Tesla vehicles, catching on fire after high-speed crashes, which is also quite common with gasoline-powered vehicles.

Where EV fires require attention is when the electric vehicle’s battery pack catches on fire by itself without any accident or clear external factors, like what appears to be the case with Salazar’s I-Pace.

It’s also what happened with the Chevy Bolt EV. Several fires started when the electric cars were just being parked or charging raised questions about the vehicle’s battery pack, later resulting in a defect found in the LG Chem battery cells used to make those packs.

Chevy and Hyundai – who also used LG Chem cells in the Kona EV – both ended up making massive recalls over the issue. In the case of the former, it took a lot of pressure, including a lot of reporting from Electrek, to finally replace the battery modules.

In the case of the Jaguar I-Pace, the automaker also uses LG pouch battery cells in its electric vehicle:

Now a single battery fire wouldn’t raise an alarm, but Salazar’s I-Pace is not the first one to go up in flames under similar circumstances.

Therefore, Salazar’s I-Pace is the fourth known I-Pace to catch on fire while parked or charging.

While that’s not as many as the 17 known Bolt EV battery fires, it is still a decent number considering there are only just over 50,000 I-Pace electric vehicles on the road today. In comparison, GM has delivered over 120,000 Chevy Bolt EVs.

Electrek contacted Jaguar about the Salazar’s I-Pace fire and asked if the automaker has looked into a link between those four battery fires, especially as it relates to their LG battery cells.

Jaguar declined to answer our questions and responded with this statement:

Jaguar Land Rover North America, LLC is committed to our customers’ safety, and we are aware of this I-PACE incident in Boynton Beach, FL.  We have been in contact with and are cooperating with the customer’s insurance company expert regarding a vehicle inspection.  JLRNA is unable to comment further on your questions until the investigation is completed.

As previously noted, Jaguar had told Salazar that it wasn’t able to find a place to inspect the vehicle.

I want to make it clear that fires are not a big electric vehicle risk; it is completely possible to make a safe battery pack with good battery cells that won’t catch on fire on their own. Again, as previously mentioned, a vehicle catching on fire after a crash is a different thing and certainly not unique to electric vehicles.

But these types of incidents where an EV catches on fire on its own while parked or charging is definitely something that needs to be looked into and potentially lead to a recall, like in the case of the Bolt EV.

Hopefully, Jaguar is actively looking into this because it now makes three fires with similar circumstances over the last year with again, a relatively small number of cars on the road. This might be an issue.