This guy bought a wild 6,000W all-wheel-drive standing electric ATV on Alibaba. Here’s what showed up 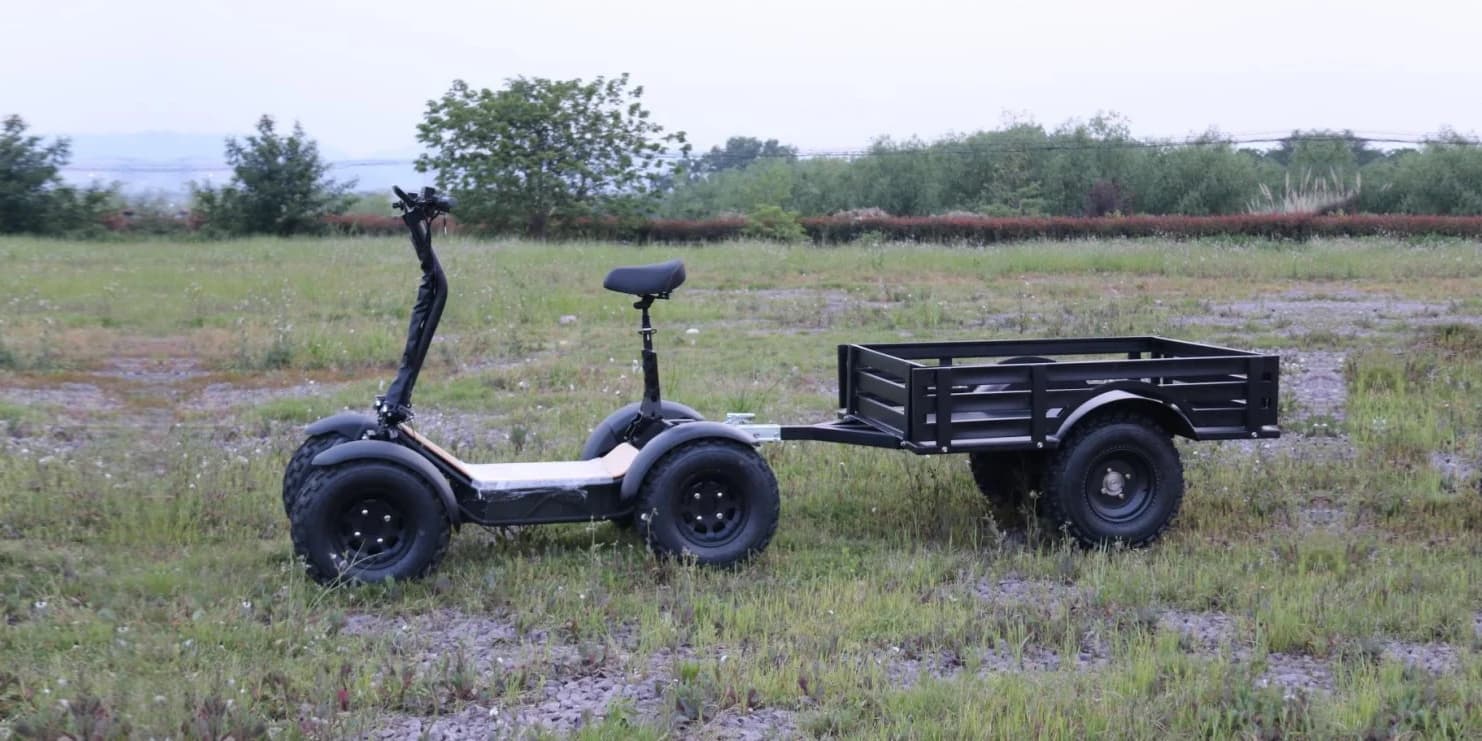 For those who haven’t yet had the pleasure (or misfortune) to discover it, I happen to write a weekly column showcasing some of the weirdest and most awesome electric vehicles I can find on the eclectic Chinese shopping site Alibaba. I’ve actually bought some of the weird EVs I’ve found, as have some of my more misguided readers who disregarded my advice not to do something dumb like me and fork over real money for what sometimes looks like imaginary vehicles.

But this time one of my enthusiastic readers has even outdone me, finding something awesomely weird that I haven’t even featured yet, and then taking a several thousand-dollar leap of faith on it. So without any further ado, check out his wild-looking 6,000W standing electric ATV…thing.

Lester (whose real name isn’t actually Lester since he wisely requested anonymity) found this wacky vehicle much the way I find my own gems each week – by perusing Alibaba’s extensive electric vehicle pages.

He stumbled upon a four-wheeled, all-wheel-drive standing electric scooter with a claimed 6,000 watts of power. And in his own words, “I just knew I had to have it.” Hey, I’ve been there.

That started a three-month journey of uncertainty.

And like all journeys, it began with a single step. Or in the case of Alibaba journeys, a single payment. Lester laid out the $3,500 purchase price for the Frankenstein electric ATV, plus another $200 in shipping. That’s a pretty low shipping price for a 10,000 km tour around the world and would have given me a bit of a pause, but we’ve actually seen such low shipping costs on even larger Alibaba electric vehicles before that have turned out to be entirely legitimate.

That $3,500 sticker price might sound steep by itself, but consider that the wacky ATV is modeled after the Israeli military electric vehicle known as the EZRaider. That all-terrain vehicle costs well over 5-6x the price of this Chinese version that at least appears to offer similar specs and performance to the original. For that price, you get something that can fly up stairs almost as fast as it can bomb down them.

Paying for the electric four-wheeler was the easy part, it turned out. Figuring out what came next was a bit more opaque.

As Lester explained to me, it was radio silence from the company for around a month after payment. Then one day they reached out telling him that his electric skateboard on steroids was loaded onto a container ship and he needed to file the customs forms immediately.

If you’ve never imported a vehicle from the other side of the world before, then congratulations – you’re in the same boat (literally) as about 99.999% of the population. And that means you have no idea what ISF forms are or what bonds you need to secure or what the heck an HTS code is. And yet all of those things are crucial to actually receiving your import and not being on the business end of massive fines when it finally arrives.

That’s exactly why customs brokers exist. They bend you over a container and charge whatever they want, but they handle the massive headache of all that stuff that we normies simply don’t understand. And so in a frantic search, Lester was able to pull up a customs broker service online and find someone to get all his ducks in a row quickly.

There ended up being around $1,300 in extra charges, namely import tariffs and an importer bond, plus a relatively minimal $100 fee for the customs broker’s services.

But the magic spells were performed (which was made even more impressive since the Alibaba vendor simply stopped responding to requests for important info like packing lists and other critical documents part way through, perhaps due to several Chinese national holidays or recent lockdowns) and Lester’s Mad Max electric ATV scooter was officially documented and on its way.

The boat headed for the US West Coast, though weeks went by between when the boat eventually arrived on the California coastline and when the scooter was finally available for pickup. It eventually wound its way to a distribution center where Lester had to go and lug it home himself. He rented a U-Haul trailer with a 5×8 foot cargo area, which he figured would be plenty.

At the distribution center, his truck wasn’t high enough to use the loading dock and so he had to pay another $50 fee for someone to drive it down the ramp on a fork lift. Word the wise: When this happens to me, I find that a $20 tip to whoever seems to be closest to the forklift generally helps to waive any official “fees” that might have been floated earlier.

When the cage holding the electric ATV contraption made its way into the trailer, it turned out there was about an inch of clearance on each side of the opening. It’s a good thing it wasn’t cold out or that 5×8 foot trailer might have been a smidge too small.

But Lester got his new party cart home and from there it was all downhill. Almost. The last challenge was getting the 400 lb. crate out of the trailer. Once it was muscled out though, that’s when the fun began!

The scooter worked like a charm and flew frighteningly fast up to its electronically limited speed of 25 mph (40 km/h). Lester explained to me that the 6,000W of power divided among four wheels makes it wickedly torquey, and the full-suspension design makes it a blast to ride.

The vendor’s sales page shows it climbing what appears to be a nearly 45-degree incline – a 100% grade – as well as climbing stairs. Based on that, Lester’s seems to be the real deal. See the video above for the vendor’s director’s cut.

The center of gravity is basically inches above the ground, meaning it can lean hard and feels stable in turns. There’s also a seat option, but Lester says he’s only been riding it in the standing mode.

He’s also mostly used it on-road so far, where Lester says the large wheels and full-suspension are ideal for hopping curbs. The turn signals and mirrors also seem like road-friendly inclusions.

But it also looks like it will be a beast when he gets it off-road. Plus it even has a tow ball on back, so he could hook up a trailer and haul rocks or do whatever else people use trailers for off-road.

For those keeping score at home, it turns out that the all-in price was close to $5,000 by the time it rolled into Lester’s driveway. That’s not cheap (and in fact is only a bit cheaper than my mini electric pickup truck I also bought from Alibaba), but it is a fraction of the $20K price of the real-deal standing electric ATV that this thing ripped off.

Lester’s summary in his own words paints an interesting picture for anyone who may be considering following in his footsteps:

Overall, I’m impressed with what I got and I would absolutely buy another wacky gadget on Alibaba. I know more now than I did when I started. It’s a lot of work though – it’s not the usual online purchase and there was no guidance along the way on the part of the seller. I also learned that a lot of these complications are primarily related to the fact that it was transported by sea rather than air so people’s experiences could vary based on that.

As usual, I advise people who are hesitant to avoid taking a risk on something big like this from Alibaba. It’s easy to get drawn in by the fun (and weird) vehicles with attractive specs and prices. But it’s a wild ride full of twists and turns when you actually start laying down your hard-earned money. And it almost always requires more of that money than you initially expect.

For those wise folks that just want to live vicariously through reckless brave thrill-seekers like Lester and myself, stay tuned for the next entry in the weekly series of wild Alibaba vehicles that you’ll love to hate or beg to own.