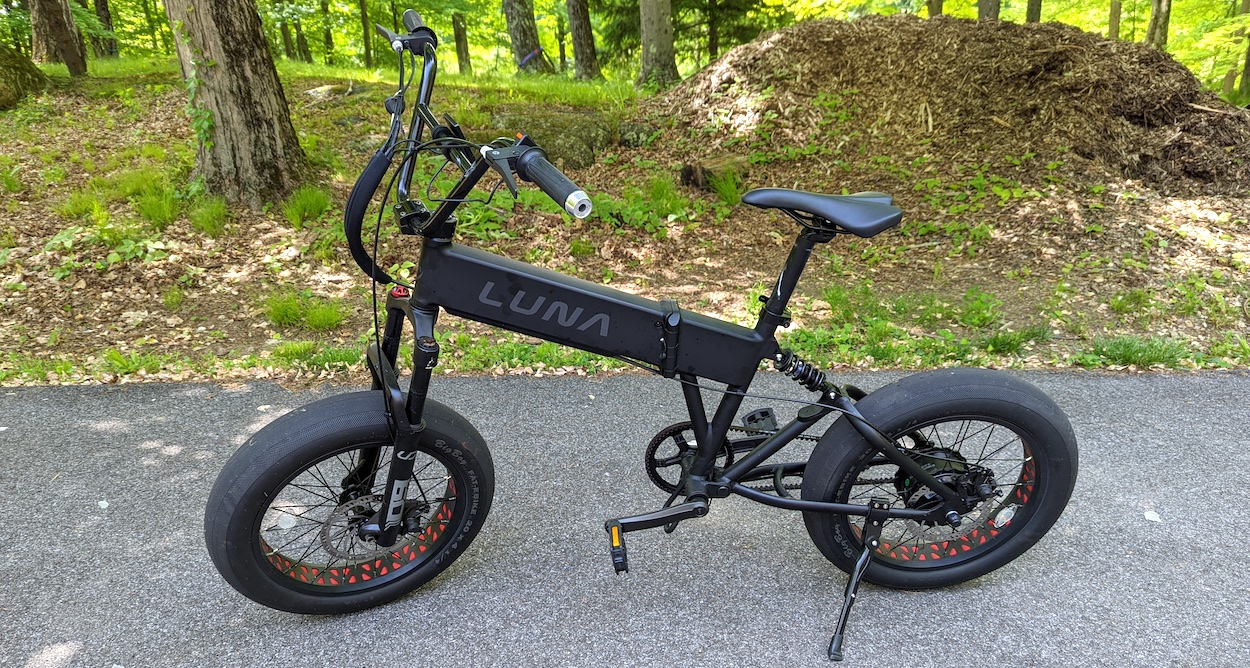 ….that pedals smoother than most acoustic bikes up to 25mph.

I’ve spent the last few weeks with Luna’s new $1395 Eclipse folding fat tire e-bike. It is unlike any other e-bike on the market, and yet I can recommend it enthusiastically for a big swath of the foldable fat tire e-bike market. And even some general e-bikers. Here’s why:

One look at Luna’s new Eclipse e-bike, and you know there is something special here.

It is part BMX, part fat tire folder and part full-suspension e-bike. Add to that solid components all around like a 1kW Bafang geared rear hub motor, aluminum alloy frame, Gates CDX belt drive and big 672Wh removable battery and we’re looking at an incredible package that Luna is somehow selling for under $1400.

That price however means some costs had to be cut. Some components are great but not are all amazing – notably mechanical brakes and mid-grade suspension. No gearing makes 20mph+ pedaling difficult and top assist speed of just 25mph.

Still though, with full suspension, gates belt drive, great wheels and 1kW of power and 672WH of battery, this is an amazing package and more importantly the Luna Eclipse is so much fun to ride and own.

Update: I hadn’t seen the Enki Billy bike which obviously was inspiring. Thanks commenter.

The Eclipse arrived about a week from order placed via FedEX from Luna’s HQ in El Segundo/Los Angeles, CA. FedEX contracted a local last mile delivery service to get it to my door, and the box arrived in great shape.

Unlike some foldable bikes that come mostly assembled and folded in a wider/shorter box, Luna’s Eclipse arrives in a traditional long, narrow bike box with about 10 minutes of assembly required. You’ll only need some scissors for the zip ties, a hex for the four handlebar screws, and a wrench for the pedals and front wheel. Other than that, and putting the seat in and optionally adding some air to the tires, it is ready to go. The process is super easy and even someone with zero experience putting together a bike could do this in just a few minutes.

One thing to note about the foldability of the Eclipse is that the handle bars don’t fold, so it ends up being a bigger package than some other folders. For tight space trips, you could just loosen the four hex screws and fold the down the 8-inch handle bars, or even loosen the front bolts and take off the front tire.

One thing I really like about Luna’s packaging (for all of their bikes) is the liberal use of cardboard as padding. Only a few pieces of plastic protection and zip ties (15?) are used and that waste can be held in one hand. The rest is recyclable paper products which feels very eco-friendly.

Luna posted an incredibly detailed and useful unboxing and assembly video below, which I’ll not attempt to usurp:

The bike battery came in about 2/3rds charged, so I immediately plugged it into the fanless 54.6V 2.0A Barrel Charger made by Wuxi Dpower (note Luna specs say 2.5A). Fanless means it is going to be a little more rain-proof but no such warrantees are given. An extra charger for the office or backpack is going to run you about $30. A full charge takes about six hours with this charger, but Luna offers faster 5A chargers that will cut charge time by more than half.

Jumping on the Luna Eclipse

I really couldn’t wait to jump on this thing and take it for a spin. It definitely has a BMX vibe/approachability but the step over height is deceptively high at 73 cm or almost 29 inches, especially compared to other 20-inch wheel folders.

Another less obvious departure from a typical 20-inch fat tire e-bike is the the standard seat here. Rather than a banana seat or a bench or even a comfy saddle, Luna ships the Eclipse with a Chifa seat made for pedaling. It isn’t anything to write home about comfort-wise, but it also doesn’t make pedaling an afterthought like a lot of the heavier Super73-style bikes out there.

That’s one of my big takeaways here. You can actually pedal this bike. On a flat surface, it feels like a regular acoustic bike with the power off. It glides like a bike with much narrower wheels. For short trips where your speed doesn’t need to get terribly high, some folks won’t even turn the power on here. That’s impressive for a bike with a 1kW motor.

Eclipse owners who expect to see a 1kW motor on their bike will be disappointed that the motor that it ships with, the Bafang RM G.06 48V 500W, is rated for half that much nominal power. However, Luna ships the bike with a double power controller which maxes out at 48V and 21-22A. My first thought was, “Is this going to overheat? Not be terribly efficient at high power?”

After a few weeks of taking my not lightweight self up a 700ft hill without issue, I had 0 issues with the motor. This one is also rated at 80nm of torque. After a recent big climb, I did an old fashioned heat test (put my hand on the motor). It was a little warm, but not hot. Luna says they’ve done hours and hours of testing on the dyno and that it can handle 1000kW all day long.

Riding the Eclipse is instantly different than most 20-inch fat tire bikes I’ve tried. The low 55lb weight, the low rolling resistance tires, and the Gates CTX belt drive combine to make this an entirely pedal-able bike. Add 1kW to the pedal assist or throttle, and you are playing with the acceleration of those heavier Super73/Juiced Hyper/Arial Rider type of bikes that are pushing close to double the motor and battery requirements. Up steep hills I was close to the same 15mph that I get on the heavier, less efficient bikes.

For better or worse, however, the motor cuts out at 25mph making this a “class 2.5-ish” bike. Unfortunately, most people will stop pedaling long before they reach 25mph. With the one gear speed that Luna optimized for fast starts and hill climbing, the ability to pedal at 18-25mph is a test of cadence threshold.

That’s probably my major complaint about real world usage. I like to pedal assist and get at least a little exercise when riding. I found that dialing the assist down to about 3 (0-5 are options so that’s probably ~500W) and pedaling briskly got me up around 18mph on flat roads. Compare that to my 250W class 3 commuter e-bike which gets me to about 25mph on flat roads. However on the steepest and most dangerous hill on my commute, that 250W commuter bike drops down to 8-10mph, whereas I have no issue hitting 14-16mph on the Eclipse. That makes me feel a lot safer.

I got the Eclipse up to 45mph on a downhill, and it felt relatively safe and stable. The Tektro brakes and 180mm discs are just fine for bringing this 55 lb. bike to a stop. I did need to tighten the brakes a few mms after about a week of usage, which is completely normal.

Luna includes a 48V 14AH (672WH) removable pack with LG MJ1 18650 cells, which is quite a bit bigger than other packs we see at this price point and even higher. It locks into the tube with a hidden bottom and is chargeable inside or outside the bike with the same port.

I have a hilly 10 mile round trip commute to “the office” (read: coffee shop) – after two trips on level 3 pedal assist, I had used about half the battery, so I think 40-50 miles is realistic in normal settings. On throttle alone I think you’d be closer to around 25-40 miles depending on the speed, weight of the rider, and the amount of hills.

There’s no USB port here on the bike or battery which is a shame because it could make a great backup power supply or iPhone charger.

Hey this thing is full suspension, fat tire e-bike with a kilowatt of power under the hood. Of course it goes off road!

But I’d stick to the beginner – or at very worst – intermediate trails on this one. The tire tread isn’t great for mud, and the suspension just isn’t mountain grade. However, the Luna Eclipse kicks ass on gravel giving a much better ride than I expected, even in rain.

The biggest differentiator between this bike and other fat tire e-bikes is likely the high-end Gates CTX belt drive. By no means is this a cost saving feature, but it is certainly a weight saving feature. By removing the chain, gears and controller, Luna is saving a significant amount of weight while at the same time providing a much smoother and simpler pedaling experience with much less maintenance over time. But that also means adding gearing would jack the price of this thing up significantly requiring an internal geared hub. I would pay a few hundred extra for a 3-gear setup, so maybe a Shimano Nexus makes sense here? As it stands, pedaling gets hard before you get to 20mph.

Other small quibbles I have with this bike:

Again, Gates CDX components are expensive, so it is beyond impressive that Luna got these in a $1400 bike.

As I’ve said throughout, the Luna Eclipse is a game-changer of a bike and unlike anything we’ve seen before. It looks like a cool BMX-ish bike, rides like a smooth, fast commuter bike, folds, goes off-road, has impressive power and range, and costs way less than you’d ever think. The few quibbles I have are a result of Luna needing to get the price down, and I have to say that for the vast swath of e-bike buyers, the tradeoffs were overwhelmingly worth it.