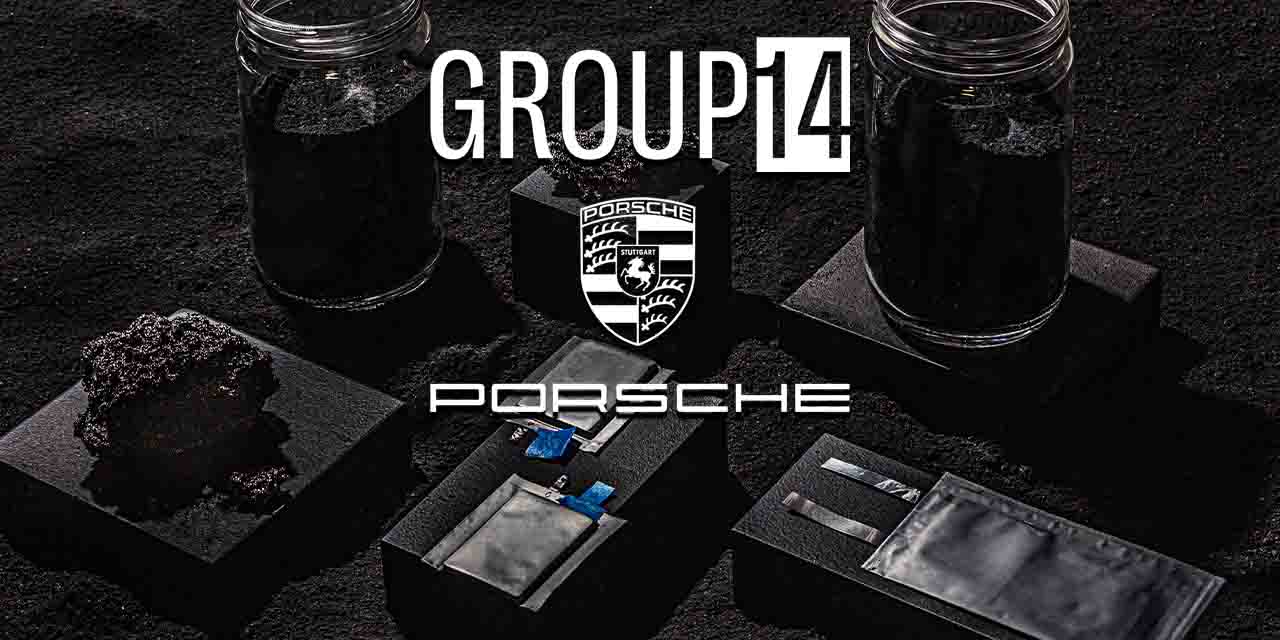 Group14 Technologies, a manufacturer of silicon-carbon tech for lithium-silicon batteries, announced it has raised $400 million in a Series C funding round led by Porsche AG. Group14’s technology can help deliver better-performing cells compared to traditional lithium-ion batteries and will use the funds to begin building a second manufacturing facility on US soil to expedite tech to Porsche.

Group14 Technologies was founded in 2015 in Washington state as a spinout of enerG2 based in Seattle. Since then, the company has seen breakthroughs in battery materials, particularly silicon-carbon, which can deliver higher levels of energy density to lithium-ion-powered vehicles. 50% more compared to traditional lithium-ion batteries, according to Group14.

This is achieved through its drop-in-ready nanomaterials and scalable processes that have been verified by multiple third-party OEMs and battery manufacturers. Some current investors include ATL, BASF, and SK materials – part of SK Group.

In April 2021, we reported news of Group14 opening its first US Battery Active Materials (BAM) facility on the same site as its headquarters in Woodinville, Washington. The company immediately began utilizing the 27,000 sq. foot facility to commercialize its technology that swaps out the traditional graphite anode for a silicon carbon-based one.

The company has also broken ground on a second factory in South Korea as part of a joint venture with SK Group. With its latest round of funding, Group14 now looks to erect a second US BAM factory and leapfrog some of the barriers present in current battery tech with OEMs like Porsche.

Group14 to erect second US BAM factory to support Porsche

The battery materials specialist shared news of its $400 million in Series C funding in a press release early this morning, sharing the following message:

As automakers pledge to electrify fleets, OEMs are turning to lithium-silicon technologies, which are fully compatible with existing manufacturing facilities and processes, over other industry alternatives to bring premier performance and reach cost-parity with internal combustion engines.

One of the OEMs turning to Group14’s silicon-carbon tech is Porsche AG and its subsidiary Cellforce Group. As Porsche’s all-electric Taycan sales continue to hockey stick upward, the German automaker has begun working toward its recent vow to make 80% of all sales BEV by 2030.

Additionally, the company has begun working with solid-state battery manufacturers like QuantumScape to integrate higher density cells into future EVs like an all-electric 911. Porsche AG is continuing this trend by investing in Group14’s silicon anode technology. Lutz Meschke, deputy chairman and member of the executive board of Finance and IT at Porsche AG elaborated:

Despite all global challenges, we are driving forward on our future projects consistently including digitalization and electrification. Our investment in Group14 is an important step for Porsche’s M&A activities. We have been actively investing in ambitious companies since 2016 and through our venture capital unit Porsche Ventures, we have gained a deep understanding of the venture capital world and are excited to lead this round.

By partnering with Group14, Porsche can better assist Cellforce Group in its plans to produce lithium-silicon battery cells in Germany to be implemented in Porsche EVs by 2024. With a major OEM on its team, Group14 looks to further accelerate delivery of its drop-in-ready battery technology.

To do so, the company plans to break ground on a second BAM manufacturing factory on US soil this year – again in Washington state. Group14 Cofounder and CEO Rick Luebbe also commented on Porsche AG as its newest customer:

Group14 is well-positioned to elevate all batteries by enabling the transformational performance of silicon in today’s lithium-ion and tomorrow’s solid-state applications. We have been laser-focused on scaling our factories to deliver commercial quantities to customers in a mission to eradicate charge anxiety as fast as possible. With incredible support from a consortium of strategic and institutional investors led by Porsche that believe in our vision and road map, we can continue to advance the batteries that breathe life into the electrification of everything.