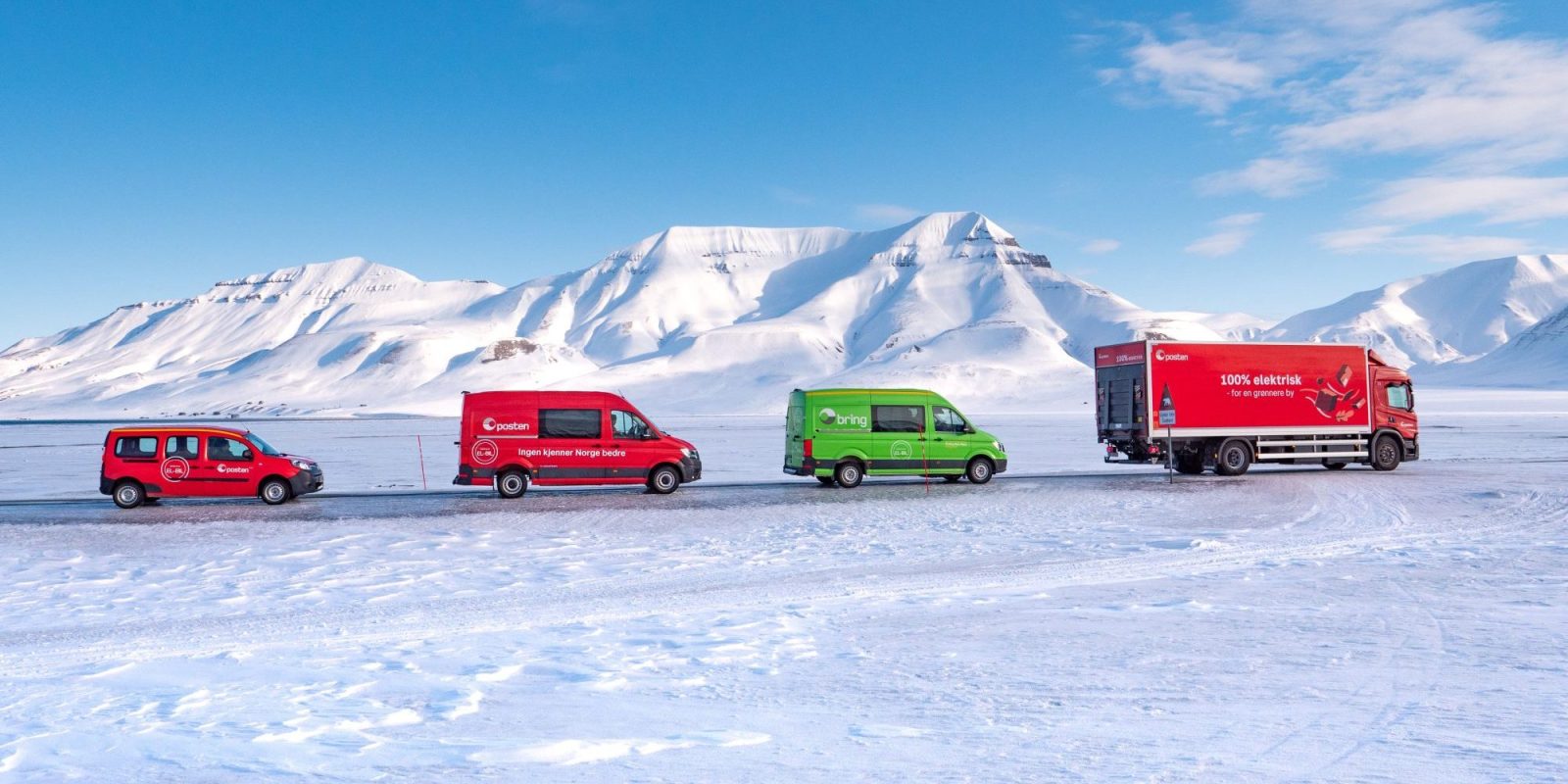 Posten Norge, the Norwegian postal service, has put into service a 19-ton all-electric delivery truck from Scania on the remote Arctic archipelago of Svalbard, as reported by Teknisk Ukeblad. This truck means Posten’s delivery fleet on Svalbard now consists solely of electric vehicles.

The new truck will service the post office in Longyearbyen, the world’s Northernmost human settlement of over 1,000 people. Longyearbyen has frigid weather year round. The average low temperature only goes above zero degrees Celsius in the middle of summer, and average high temperatures stay negative from October through May.

Cold weather is often brought up as a hindrance to EV adoption since electric car batteries have reduced performance in cold weather. But in cold and EV-obsessed Norway, where 83% of new cars were all-electric last month, cold has not slowed EV adoption at all, even within the Arctic Circle. The country has been the fastest in the world to uptake electric vehicles, targeting a 2025 end of new gas car sales – which it’s on trend to meet earlier than anticipated.

Posten Norge had been testing their new 19-ton electric truck around the country. It began in Østlandet, the region that includes Norway’s capital Oslo, a less rugged and more temperate part of the country. Then the truck was tested in Tromsø, in the distant North within the Arctic circle. Only after those mainland tests was it moved to Svalbard, and after testing there, Posten has decided that it will remain in service there.

So far, the truck has proven its capabilities in temperatures as low as -20ºC (-7ºF).

Posten Norge’s press manager, Kenneth Tjøndall Pettersen, underlined the truck’s rugged weather capabilities: “If you can get it on Svalbard, you can probably get it anywhere.”

It’s not all perfect yet, though. Longyearbyen’s electricity is generated through coal – a contrast with the rest of Norway’s electricity, which is 97% hydroelectric. Despite coal and oil being dirty and expensive ways to generate electricity, they do have advantages in terms of portability, which are helpful for extremely remote areas like Svalbard.

Svalbard plans to phase out coal power in 2023, and all-electric trucks will be ready to take whatever electricity they’re provided. This is one of the advantages of EVs – they are energy-agnostic, so as grid generation cleans up, an EV will need no upgrades or retrofits to take advantage of new generation methods.

As for the rest of Norway, the country has already been converting delivery vehicles to electric starting about a year ago. They currently have 65 heavy duty electric delivery trucks on order and five in service already, with 37% of Posten’s vehicles running (including smaller delivery vans) on non-fossil powertrains as of the start of this year. By 2030, the goal is for 100% of delivery vans and 80% of trucks on the road to be fossil-free – not just new acquisitions, but in-service vehicles as well.

As the headline suggests, our take here is that USPS and corrupt postmaster DeJoy could learn from Posten Norge. USPS is currently refreshing their aging delivery fleet but has given tons of excuses for why they can’t go all-EV, planning for only 20% of Next Generation Delivery Vehicles (NGDVs) to be all electric.

USPS’s current delivery vehicle, the Grumman LLV, was put into service starting in 1987, 35 years ago. This means if the NGDV lasts as long as the LLV did, USPS will still have gas guzzlers on the road in 2057, which does not look particularly ambitious compared to Norway’s 2030 100% EV goal for in-service delivery vans.

But you know, the United States is different! We’ve got a lot of remote places, with cold weather, and surely EV delivery vehicles just aren’t capable of servicing those areas! We have to wait until the technology develops more!

To be fair, delivery services in Svalbard do not have particularly long distances to drive. This vehicle’s primary route will be between the Svalbard airport and Post office, a route that is under 10km.

USPS does claim that EVs aren’t able to do their longest routes, but the USPS Office of the Inspector General (OIG) stated that longer routes are in fact the best to electrify since they will result in the highest energy-cost savings. There are certainly some routes for which current electric tech isn’t quite suitable, but those routes are on the order of 10-20% of routes, not the 80% the agency currently claims.

So, USPS needs to take direction from Norway and other countries, like Germany, that have been implementing electric delivery vehicles, as noted in the OIG’s report.

But primarily, what this story does is show, once again, that EVs are certainly capable in extreme environments – of which Svalbard is one of the more extreme on Earth. If you can get it in Svalbard, you can probably get it anywhere.