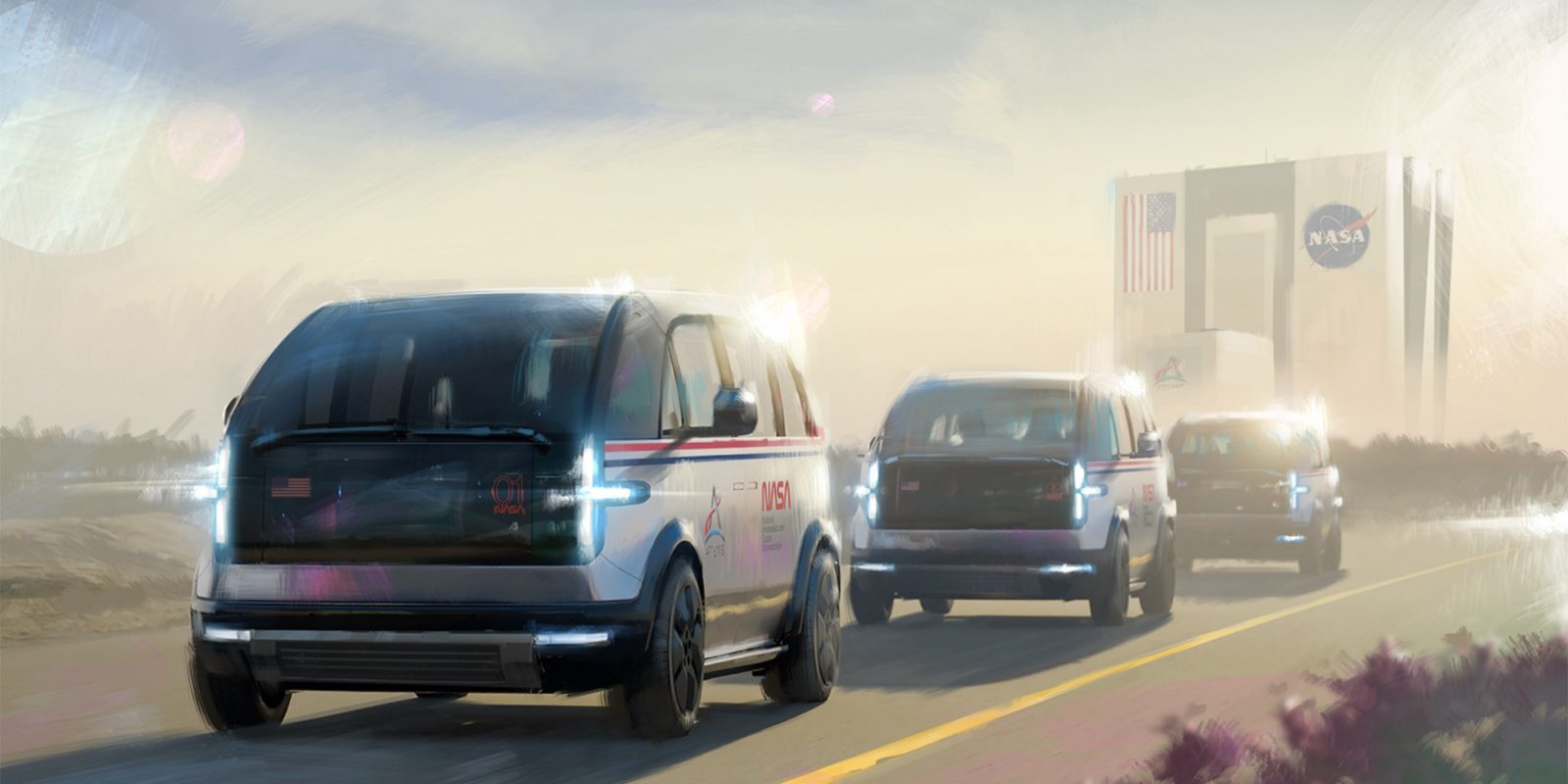 The National Aeronautics and Space Administration (NASA) announced it has chosen EV startup Canoo to provide zero-emission EVs to transport its crew to the launchpad for NASA’s upcoming Artemis missions to the Moon. Canoo will soon join the likes of Tesla and Rivian as EV automakers integrated into the realm of space exploration.

April 13, 2022 update: Following first news of a potential award from NASA last week, we reported that Canoo ($GOEV) would not comment. However, the American automaker has now confirmed the official award from NASA following a ten day holding period, hence the delay for public comment.

According to a press release from Canoo, it will provide NASA with Crew Transportation Vehicles (CTVs) based on its Lifestyle Vehicle (LV) model. Furthermore, Canoo confirmed it will deliver multiple customized LV models to NASA by June 2023 as part of its upcoming Artemis launches.

Within the release, Canoo also shared a rendering of the custom EVs donning the NASA logo (see above). Canoo Chairman and CEO Tony Aquila spoke to the award:

We are honored to transport the Artemis crew to the launch site for the first human lunar landing in more than 50 years. The selection of our innovative technologies by NASA to take a diverse team of American astronauts to the moon showcases a great commitment to sustainable transportation. As a high-tech mobility company, we are inspired by NASA’s pioneering and trailblazing spirit. Our customized vehicles are modular and upgradable throughout their lifecycle with a high level of recyclability at end of life. Canoo’s Made in America electric vehicles embody our nation’s ingenuity and bold determination to reclaim global technology leadership for America and its allied nations. We are proud to be a partner to NASA in one of the world’s greatest endeavors.

Whether it’s being dramatized and celebrated on the silver screen, or watched live by audiences in person and on TV, NASA is a globally recognized organization for space exploration. The space administration’s latest program, titled “Artemis,” began in 2017, with a history dating back over a decade earlier, and, if successful, will be the first human lunar landing since the Apollo 17 mission in 1972.

With a goal to touch down on the south pole of the Moon by 2025, the Artemis program will also support the long-term goal of a crewed mission to Mars. As one of the contractors in the program, SpaceX’s Starship Human Landing System (Starship HLS) was selected by NASA for potential use during long-duration crewed lunar landings.

During that mission, Blue Origin tapped Rivian’s R1T pickup trucks to recover the crew when the capsule returned to the Earth’s surface a few minutes after launch. Following NASA’s latest announcement, Canoo could soon be the next automaker to provide EVs to space travelers.

The news, shared by Bloomberg, states that EV startup Canoo has been tapped by NASA for a contract out of a pool of multiple bidders. The contract, which was awarded to Canoo on March 31, is valued at $147,855, although the aforementioned competitors have until later this month to protest the decision.

If the award does in fact stick, Canoo would provide NASA with at least one of its EVs to transport Artemis astronauts from their preparation building to the launchpad during, both dress rehearsals and on the official launch day. NASA’s other parameters are that the EV(s) have zero-emissions, a minimum range of 50 miles (80.5 km), and room to seat eight people.

Canoo’s Lifestyle Vehicle, scheduled to enter production toward the end of this year, feels like the automaker’s best available option, although it only seats seven according to the company website. Canoo has yet to comment on the contract award, or provide any plans of what EV it will be manufacturing for NASA and the Artemis program.

In a statement to Bloomberg, NASA publicized confidence in Canoo, stating it is “excited for this partnership and looks forward to seeing the next generation of crew transport vehicles.” Canoo should be excited at the opportunity as well.

Although it’s not the most lucrative contract, the publicity could be tremendous for an EV startup that remains much smaller than many EV competitors and has had a rough go of it recently, following a mass exodus of employees amidst an SEC investigation.

Commercial production of Canoo’s flagship EVs is still on track to begin in 2022, according to the startup. The first crewed mission in the Artemis Program, Artemis II, is scheduled for launch in 2024 while the SLS rocket supporting the uncrewed Artemis I mission currently sits on the launchpad for its Wet-Dress rehearsal, with its launch planned for later this year.