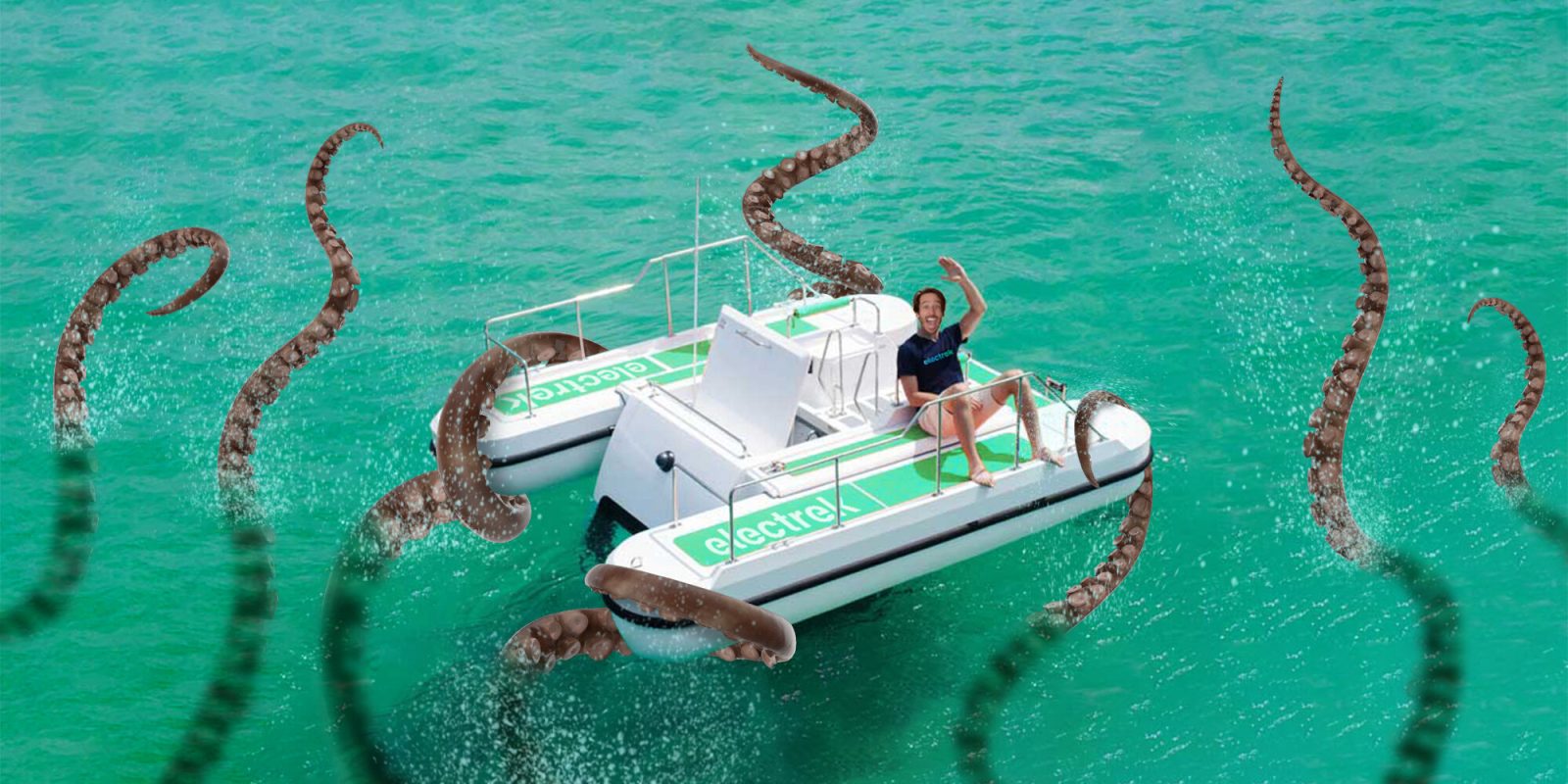 We have a lot of fun scouring the abyss of Alibaba in search of the most creative assemblages in the Chinese shopping site’s endless array of electric vehicles. That search often takes us on land and occasionally even into the skies. But this week we’re going to don our bucket hats, flip-flops, and tank tops as we head to sea on one of the weirdest electric boats I’ve ever seen.

There’s so much going on with this vessel that I almost don’t know where to start.

Let’s begin at the top and work our way down.

I almost want to call it a pontoon boat, though I’m not sure it exactly fits the definition.

There are two semi-pontoon-ish protuberances on either side of the boat, connected by what appears to be a raft in the middle.

The whole thing is helpfully surrounded by taffrails, and there’s a nice little ladder on the back for each water access.

So far it looks more or less seaworthy, though that giant open hatch is starting to worry me a bit.

While I firmly believe there’s plenty to appreciate in life above ground, if you want head below the waterline without actually getting wet, this boat has you covered.

There’s some type of odd submarine-like capsule stuck on the bottom, accessible through a hatch in the raft.

I’m not sure what you call that. A lower deck? A submersible? A boat basement?

Whatever it is, the little capsule is surrounded by clear windows that will either give you an amazing view of the undersea environment around you, or launch you into a claustrophobic dry-drowning nightmare when someone shuts that hatch above you.

And may Neptune save your soul if you ever encounter a sea monster while riding in the 01 deck. A giant squid wrapping around that thing while you’re locked inside is nightmare fuel, plain and simple.

The only saving grace here is that, unlike an actual diving submersible I previously found on Alibaba, it appears the only way this thing will actually head toward the seafloor is if something has gone horribly wrong.

Assuming all is according to plan, the submersible section should never reach Nautilus depths of 20,000 leagues. Instead, you’re sitting pretty barely a meter under the water. Or as Wolfram-Alpha helpfully tells me, it’s more like 0.00018 leagues under the sea. I’m no Captain Nemo, but that I might be able to handle.

In terms of construction or propulsion of this mysterious electric boat, unfortunately I won’t be able to help you much there. As far as I can tell, it is powered by two electric motors with attached propellers, each in a pod under the pseudo-pontoons.

There’s no information on battery capacity, speed, or other helpful metrics, and the manufacturer seems a bit hard to reach.

Among the product’s “advantages” lists, the vendor includes a mention that it is “not easy to be damaged.” That’s one of those things that I feel like should be a given. When I hop on board a submarine, my first question isn’t normally “how easily can this thing be damaged?”

At $8,000, I’m not sure I’ll be buying one of these electric boats sight unseen.

There are other cheaper electric boats on Alibaba that I’m actually considering buying (which are also likely to keep me a lot more dry and alive).

But if you want to go all Jacques Cousteau on us, don’t let me stop you. Just don’t invite me out for a day under the water, either.

I’ll keep my feet squarely on terra firma, thank you very much.