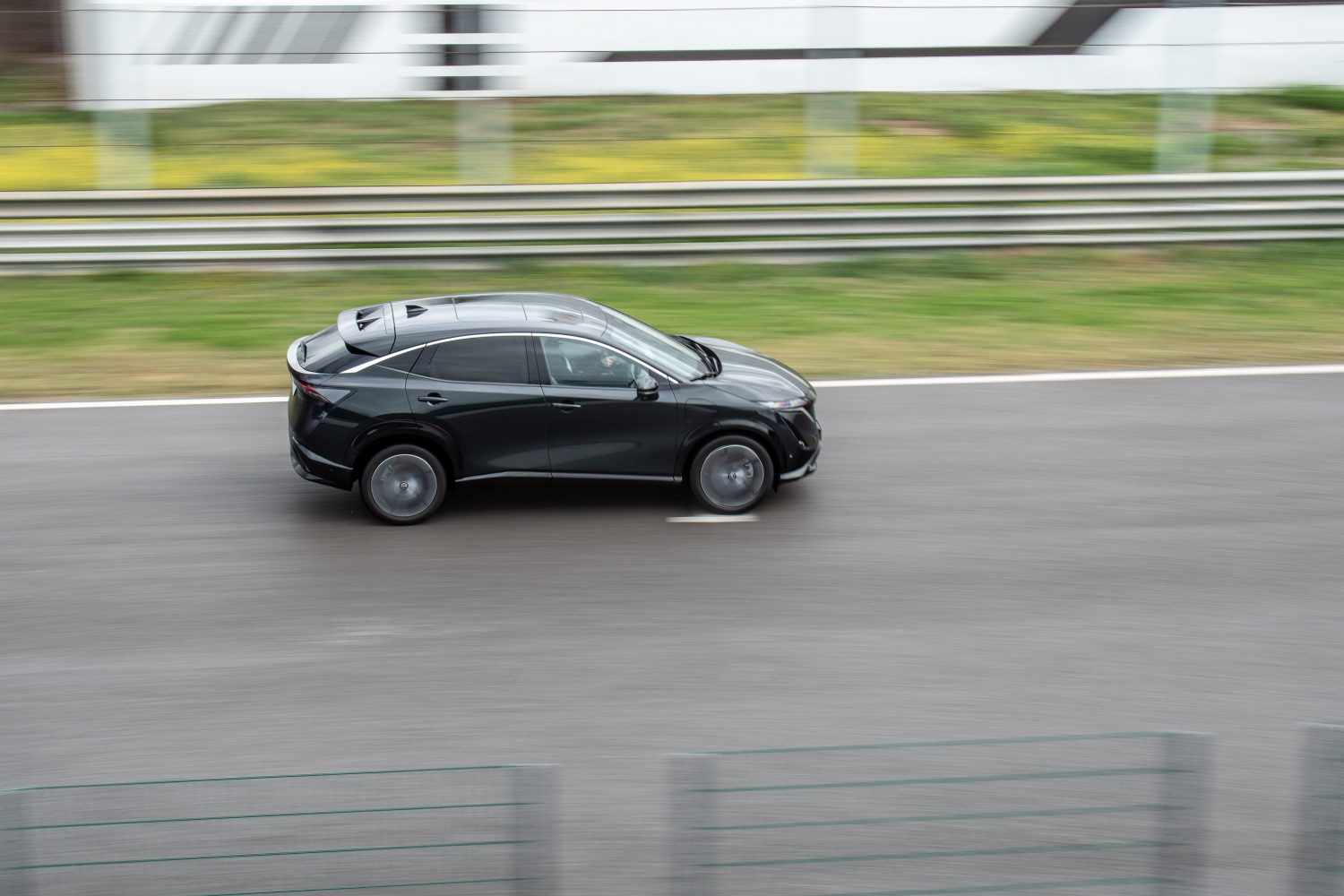 Nissan invited the media out for a day at the track with the Nissan Ariya, the company’s long awaited second EV. After spending time driving and goofing with the crossover, I realize this vehicle is simply amazing. I think the Ariya is exactly what the American buying public would want and expect from an EV – the kind of predictable car you can settle down with in the fall and make plans for the future.

But, will someone snatch it up if you go on a summer fling with Tesla?

The Ariya felt like a peppy and smooth ride, especially compared to a stiff SUV (and some crossovers). The suspension wasn’t tight and precise, but a tiny bit loose and relaxed. Acceleration was as peppy as any EV, something we all expect. However, Nissan must be using a thick-wound motor, because the peppiness extended to higher speeds as well, offering a punchy jump even starting from a 40 kph jaunt.

Nissan is debuting its CMF-EV platform with the Ariya. Nissan was proud to say it has achieved a 50/50 weight balance with this design, including passenger placement. This feature puts a glow on the already great handling that makes modern EVs so much better than their predecessors.

Braking the Ariya was a bit intimidating, but that was entirely due to the regen braking setting that I simply wasn’t accustomed to. Getting into the car, the brakes were very responsive, even jarring the one time I stomped on the pedal. Turns out, regen braking is also influenced by the drive mode selected (in this case Sport Mode). With a bit of customization and practice, the brakes could be mastered.

For the AWD version (yet to be tested), Nissan is using a duplicate motor in the rear, adding significant weight, so it’s nice to know that hard emergency stops are available for that option. Overall I think the powertrain was right in line with other EVs in the segment. Nothing stood out to me.

The model we drove was called a prototype, but the marketing team also told us it was built to European specs, a combination that we won’t get in the states. We drove a high trim level with the smaller battery pack (63kwh). This means the inside had all the creature comforts that make the car unique.

Riding in the higher trim, the Ariya had some selected points with superb fit and finish. The faux leather embellishes the touch points, from the wheel to the outline of the center console, and door accents. The seats had typically high quality materials with heating and cooling functionality. One feature stood out to me as having a lot of character – the accent lighting. Nissan credits the design to traditional lanterns used in the Japanese Edo period of 1603 to 1867 AD.

The mood is set with a simple tan, soft light behind geometric shaped “grids” in various points of the interior. Knowing the story, it felt nice, rather calming. At the same time, the busy shapes of the shades also worked to clutter the design. As cute as these shapes are, they are made of plastic, which is also noticed on other parts of the interior. I went poking around and discovered the underside of the center console compartment had a very thin, loose sheet of plastic inside. I highly doubt anyone would stick their hand under there to examine the material, but I did. It seems Nissan is trying to find a balance between a relaxing atmosphere while still offering inexpensive usability.

Aside from the touch screen in the center of the dash (which has the deeper controls of connectivity, radio, user profiles, etc) the Ariya spreads out the control points to make life easier. With only one exception, I found the buttons are all in proper order. There’s a volume dial in the center of the dash, but the majority of the audio controls go through the center touch-screen and the steering wheel buttons. The Ariya has a spanning line across the lower depth of the dashboard in a nice faux ash wood with a handsome texture. I wonder if it insulted the designer to have this satisfying aesthetic broken for the sake of adding colored temperature controls. Illuminating out from this texture are flat panel touch screen buttons with haptic feedback. Somewhere in Japan there’s an engineer, designer, and accountant all fighting in a bar.

In the seating area, the Ariya features flat floorboards in the front and back and a movable center console. The center console not only has a compartment and wireless and USB charge points (A and C) but also includes the gear selector and a few other controls. In the center console lie the controls for the drive mode selection, auto-park, e-pedal, and center glovebox.

Extending out from the center of the dashboard comes a small drawer with a retracting lid. This space can hold goodies but can also serve as a platform for resting a laptop. Nissan mentioned something like “static entertainment options,” which I interpret to mean, “something to do while charging the car.”

Life with the Ariya

The Ariya charges at a rate of 130kw, which the company was quick to point out is a largely consistent rating throughout the charge cycle. Some companies boast a max speed, but the fine print shows a sharp plummet to a slower speed during the rest of the charge cycle. Nissan nipped that in the bud, sharing a vague graph showing a slight bend peaking at 130kw.

Other features were in the car, but we didn’t get to see them in action. We didn’t get to try Nissan’s level 2 Autonomy feature set with “hands off, eyes on” nor the lane changing assist or auto-park. I didn’t have the time (or patience) to attempt to connect my phone for Alexa integration or the Nissan Personal Assistant “Hey Nissan.” In the future, we hope to get our hands on one for a longer test.

In another note, Nissan plans for OTA software updates. Instead of having a first update right after launch to showcase the OTA feature itself, the company plans on delivering a product that will remain useful for some time.

It’s not a stretch of the imagination to wonder if my world view has been warped by reading every article on Electrek for years. I’m starting to believe that having a farting car is a basic human right and that Toyota is a leader in the EV space. But every now and again, I see the light of day and realize my world is very small.

Take the EV market, for example. In 2021, the EV market share was 4.5%, and California’s government boasts 40% of total EVs are in its state. If that’s the case, the other 49 states share 1.8% of the rest, putting myself in the very rare minority that owns 2 EVs.

The other 98.2% are still driving loud, smelly, slow vehicles that cost an arm and a leg to operate and maintain. What would convince these people to accept an uncomfortable change in their lives (an upgrade, really)?

Compared to a Tesla

Unless you’re talking about size, the Ariya doesn’t compare to a Tesla Model Y.

The Ariya is a great vehicle. The feeling, features, and character will attract a lot of buyers to the EV world. The ride is predictable, the features are flattering, the interior is impressive, and the inherent EV benefits are 10 pages long. The Ariya is the stable relationship.

Like it or not, Elon Musk and Tesla are inseparable, and the eccentric genius magnet that he is brings up fears of instability in the brand. Many investors don’t see it this way, but my extended family often does.

I’m interested in the Ariya. I think we should go out again. I’m beginning to think the Ariya could be marriage material.