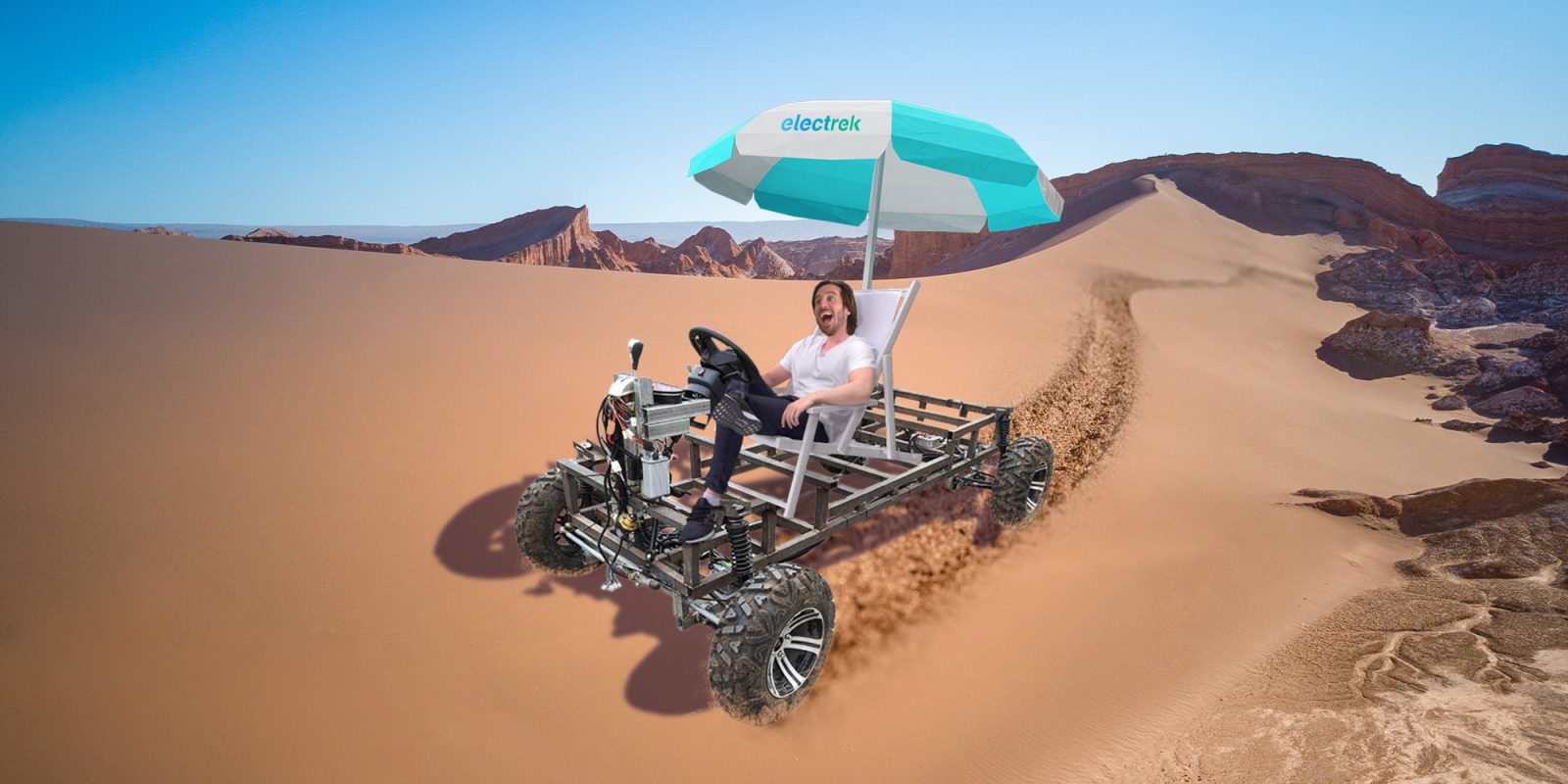 Most of the weird electric vehicles I find each week on Alibaba for this column are fun to imagine driving, but they box you into a single odd product. Maybe you get an electric horseless carriage, or an electric backyard train, or an electric house-on-wheels. But there’s not much creativity in that, now is there?

So instead, this week I think it’s time to let our creative side out to explore just what is possible when we remove the shackles of fully completed vehicular design, and instead embark on our own custom electric car creations using China’s very own electric car skateboard platform.

So that’s what I’ve got for you today: a complete electric vehicle platform (minus the batteries) to turn into whatever kind of vehicle you want it to be.

Now to be fair, it’s not nearly as robust as some of the more mainstream electric car platforms out there.

But you’re never going to find a cheaper option, that’s for sure!

For just US $2,500, Alibaba’s finest will set you up with your own electric vehicle platform that is ripe for whatever you can put on top of it.

The base specs aren’t going to blow you away. The platform only sports a 4 kW motor (5 hp) and the top speed likely falls within the typical 25-30 mph (40-50 km/h) range that we commonly see on these odd Alibaba EVs.

I can understand that some people might be concerned about the rat’s nest of wires spilling out of the top of the dash area. And yes, there’s a decent chance that motor is just zip-tied in place. And sure, perhaps some of those frame members look like they are held on there with chewed bubble gum and a prayer.

But with a little luck, those suspension mounts won’t just fold in half on the first bump.

And you have to admit, there’s just so much potential here. Full four-wheel suspension and enough room for giant batteries mean you could have yourself a pretty awesome foundation for just about any type of electric vehicle you wanted!

The possibilities are endless!

Now I’m not saying any of these are going to be street legal.

There’s nothing wise about any of this. But you don’t just show a man his own readily sourceable Chinese electric car platform and then tell him that he can’t build whatever he wants!

There are so many options, I almost don’t know where to start. You could build your own electric General Lee! Or a dolphin car! Or turn Barbie’s dream car into her reality car! If you’re lazy, just throw a La-Z-Boy chair on it and call it a day!

Oh man, somebody better stop me!

Alright, alright. We’ve had our fun.

Yes, this is a bit silly. But it’s also a legitimately interesting prospect. Assuming you could get these things produced to a decent quality standard, this really shortcuts the development cycle for building your own specialty vehicle.

From coffee vending carts and small food trucks to supplying the USPS with their next electric mail truck, there are some legitimately useful things I can think of to apply an EV platform like this to.

There is of course that small issue of street legality that I mentioned before, so I wouldn’t plan to move too fast on this – at least not in a western country. But perhaps beginning in less developed nations that don’t have as strict regulations could be a cool way to start your own micro-manufacturing EV company.

And worst comes to worst, there’s always that Barbie dream car idea to fall back on!