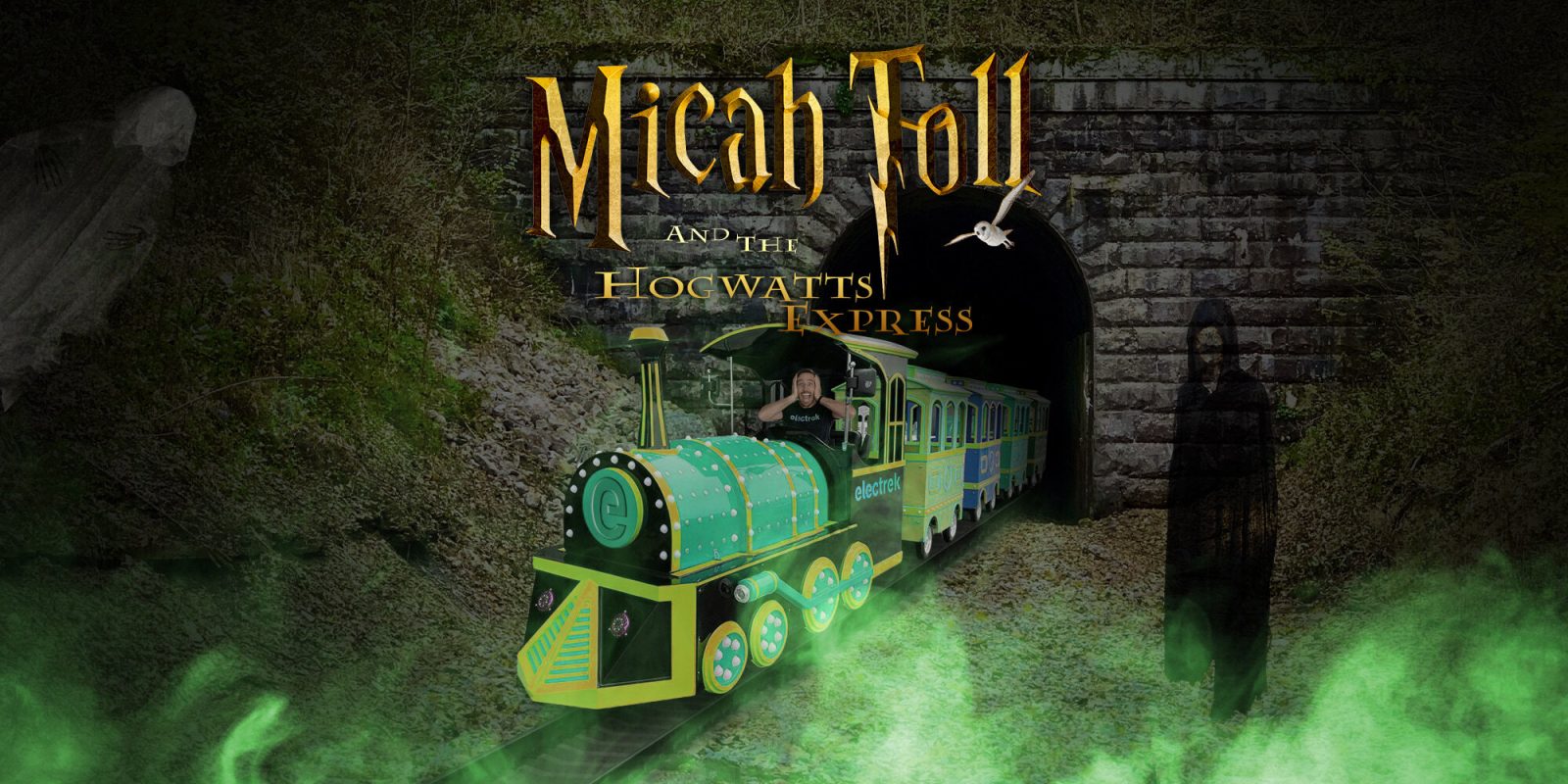 Admit it, you know it’d be fun to be chief engineer on your own train. You’ve probably never even thought about it before, but if I said “Here, have your own train. Go nuts!” you’d jump at it. I know I would. And through the magic of the internet and a crazy little corner of it known as the electric vehicle section of the Alibaba Chinese shopping site, that dream is closer to reality than you might have expected.

Today’s find of a fully functional kiddie train means we could be cruising the neighborhood and riding the rails at the same time. And that’s what makes this week’s edition of the Awesomely Weird Alibaba Electric Vehicle of the Week so intriguing!

The inclusion of an electric train takes this column into new territory, and this week’s find is truly off the rails.

I mean that literally this time, because one of the cool features of this train is that it doesn’t even require any track! The wheeled drivetrain is concealed beneath the chassis, meaning you can steer this locomotive over just about any relatively flat terrain. The local park, your neighborhood cul-de-sac, your neighbor’s petunias… the list is endless!

That lack of rails might be a deal-breaker for the true rail aficionados out there, but for the half-clutch wannabes like me, I’ll take it! And there’s nothing like a little engine-uity in the train industry to mix things up.

Now all aboard, friends and dear readers! Please allow me to gauge your interest in this awesome little electric train.

First of all, the thing is powered by an electric motor and a 60V electrical system.

The vendor says the train cars themselves are made from fiber-reinforced plastic (FRP). That’s an interesting choice for an electric train. You know, because plastic is a… bad conductor.

Sure, the train is meant for kids and thus isn’t particularly fast. This is less of a high-speed bullet train and more of a slow-camotive, at just 15 km/h (8 mph).

But that sounds plenty fast for me when cruising my local hood in style. If I went too fast, how would anyone see how cool this thing is?!

Plus think of all the benefits of turning an electric train into your primary means of transportation. Never pay for gas again. Park anywhere you want. Impress girls in bars by telling them you’re a self-taught engineer.

Where was I? Kind of lost my train of thought there for a moment. Oh right, the electric kiddie train!

This thing opens so many doors of possibilities, I can barely believe it.

You’ll have to pardon me if I’m speaking above my station, but I think that with a train like this you can be anything you want to be!

Run your own passenger transport company. Charge for rides at the local fair. Or go in the direction that our awesome graphics guy chose and start your own Hogwarts Hogwatts Express for a B-rate parody movie.

The possibilities are limited only by your imagination!

And with the 60V and 150 Ah battery pack, this train should be able to ride all day long. It’ll be like the frat boy extra in every college movie, just keeps chugging!

Want to go even further? Slap a few cheap solar panels on the top of each train car. Boom! Unlimited range (until the sun goes down).

Granted, the train isn’t terribly powerful. A measly 3,000-watt motor powers this engine and four cars along on its journey.

But as long as you’re not climbing any big hills and don’t mind crawling along at a leisurely pace, you’ll get where you’re going.

And where you’re going is fun-town, my friends! Imagine pulling up to the local elementary school to pick up your kids, or anybody else’s, in this awesome thing! You’ll be the hero of the town… or that creepy dude that bought a train. Eh, it’s all how you spin it.

The train is 13 meters (42 feet) long, but somehow has a turning radius of just 3.5 meters (11 feet). This thing is more maneuverable than a minivan! And it even has more seats too! If this isn’t the most perfect kiddie carpool vehicle, then I don’t know what is.

There are some odd inclusions as well, like a net between cars. I’m not sure why you’d need that, other than perhaps to prevent kids from playing Frogger with the thing. But safety is probably a good idea when you could end up with a one-ton train bearing down on someone. That’d be sure to give me…. tunnel vision.

Speaking of inclusions and accessories, the train even comes with its own built-in speakers for playing train music. I have no idea what train music is, but you could presumably swap it out for your own MP3s. What about some ice-cream truck music, then huck your frozen treats from each of the four cars? You could make quadruple the money of a typical ice-cream truck! Man, this thing has so many uses, it’s hard to keep…. track.

The only issue I see is getting the dang thing. Sure, the price of $12,000 is no problem; who do I make the check out to? That’s just the going rate of electric kiddo trains these days. The cost of doing business. I will somehow need to slip this expense past my wife unnoticed though. You might say that I need to… cover my tracks.

But the bigger problem is importing it. The dang thing is so long it wouldn’t even fit inside a standard container. Sure, you could disconnect the cars, but that ruins the magic! I want this thing rolling into my life in pristine condition, and I’m just not sure how to pull that off without a… hitch.

Alas, there are so many complications that maybe this electric train just wasn’t meant to be for me.

Oh well, I’ll have to comfort myself in all the other weird electric things I’ve found on Alibaba, and the few that I actually did manage to bring to home.

And if this wasn’t enough train content for you, then instead of buying this awesome contraption, you can at least enjoy watching it being operated in the product video below!