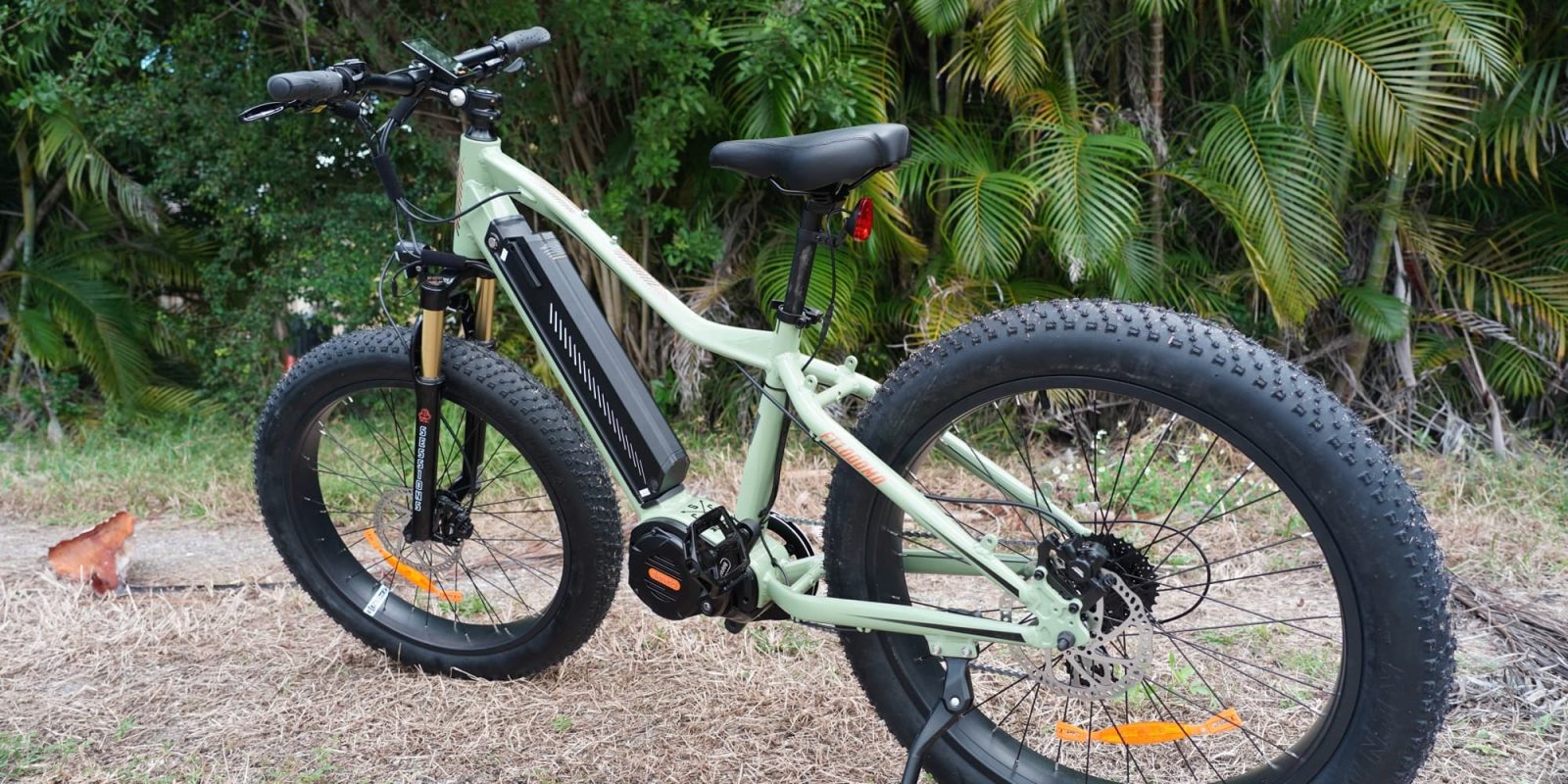 One of the many nice things about riding electric bicycles in the US is the freedom to choose from an amazingly wide selection of e-bikes, including some very high power options. I feel for my European cousins who are stuck with their 250W motors, but not as much as I feel the awesome seat-of-the-pants acceleration that I get on the CSC FT1000MD, with its 1,000W mid-drive electric motor.

That massive motor, officially referred to as the Bafang M620 or more infamously known as the Bafang Ultra, is one of the most powerful and highest torque e-bike mid-drive motors on the market.

While e-bike engineering outfits around the world are working hard while trying to top it, that motor remains the cream of the crop for high-powered e-bikes.

And it is expertly employed on the CSC FT1,000MD, a fat tire e-bike developed by a motorcycle company to blur the line between high power electric mountain bikes and light electric dirt bikes or trail bikes.

Don’t get me wrong, it’s an electric bicycle for sure (even if the purists out there would argue differently.) The torque-sensing pedal assist makes for a fun, high-response ride should you decide to pedal it. Or the throttle will open up true motorbike feelings if you just want to go full bore, getting in some truly balls-to-the-wall fun.

I definitely got some serious fun riding in, as you can see in my video review below! But keep reading after the video for the rest of my detailed review.

Lots of power, only when you need it

The beautiful thing about the FT1000MD is that despite being such a high-powered electric bike, the power is manageable. You can dial it up or roll it back to fit your riding style.

When I’m just enjoying a local field or park, moderate power is plenty. That’s especially true when I’m using pedal assist and heading out for a fun, fitness-ish leisurely ride. I enjoy have the power and torque, but I’m not going nuts with it most of the time. Occasionally, when I really want to have some fun, I’ll unleash the kraken to experience the over 1,000W of continuous power that the bike can supply.

On a flat road, that power level can push the CSC FT1000MD up to 34 mph (54 km/h). I know because I did it. But just as often though, I’ll use the power for off-roading and preventing my fat tires from getting bogged down in sand and loose soil.

The answer isn’t always “more power.” But sometimes it is.

The FT1000MD isn’t just a powerful e-bike though. It’s also well made and designed to last. The company CSC Ebikes may know their way around electric bikes, but that’s because they come from CSC Motorcycles, and thus have decades of experience in two-wheelers. That knowledge gets applied to its e-bikes as well, resulting in quality parts like a suspension fork that isn’t just ornamental like we see on a bunch of quasi off-road e-bikes, but rather actually soaks up the off-road bumps nicely.

Quality hardware and e-bike equipment designed to match the power of such a motor is also a key part of the equation. Even bike parts like the hydraulic disc brakes are designed for the extra power that a massive motor like this can create – stopping from 30 mph is a much more daunting prospect than stopping from 20 mph. There’s a lot more energy that needs to be scrubbed off. It’s the whole velocity squared thing; physics isn’t kind to higher speeds. Fortunately, the FT1000MD has the brakes to do it.

That being said, the bicycle side of the components do have one area that you’ll still want to keep watch over. The pedal drivetrain is always the weak link when it comes to such high power motors, whether on the CSC FT1000MD or any other mid-drive e-bike. While CSC did opt for a slightly higher end Shimano 8-speed Altus derailleur than we see on many budget-level electric bikes, it’s certainly not the highest end of the Shimano spectrum. Shifting under high power is a no-no, unless you want to eventually strip teeth off your gears or break a chain. Keeping the bike in high gear 100% of the time should also be avoided. Many riders will just leave a mid-drive e-bike in top gear because that’s the “fast gear”, without realizing how much wear it puts on the drivetrain due to the extra torque.

Unlike a car or motorcycle, which generally can’t be started in top gear and thus requires shifting through the gear range like a normal person, electric motors have full torque right at startup and thus can simply power their way to full speed in their highest gear. But I’ve seen plenty of people wear through that gear by using this motor on other bikes, so let this serve as a warning to you. Make sure you’re shifting properly with a heavy duty motor like this.

Another thing I really enjoy about the FT1000MD is that it includes a lot of nice-to-have components that you don’t find on other e-bikes. The adjustable stem lets you raise and lower the handlebars to find the perfect fitment and ride orientation for you, and the bright Buchel headlight is more than a glorified keychain light to warn drivers of your presence. The color display looks great and is easy to read at a glance, even in bright light.

Even the battery is larger than we typically see, coming in at 48V and 16Ah. Depending on how you ride the CSC FT1000MD and how much power you have on tap, the range from one charge will vary from “pretty darn far” to “almost nothing”. Such is life with a high power e-bike. But as long as you aren’t unreasonable with your demands, 25 miles (32 km) on throttle should be a good minimum, and 50 miles (80 km) is possible with conservative pedal assist.

Anyone intending to toss the bike up on a car rack or into a truck should note that it isn’t lightweight, tipping the scales at 75 lb (34 kg). You can remove 9 lb (4 kg) of that just by taking the battery off. With a massive motor and large battery, you didn’t expect it to be a featherweight though, did you?

Outfitting the bike with massive 4″ fat tires didn’t do the weight any favors either, though it certainly helps the FT1000MD cover just about any terrain. With that much air volume, the damn thing almost floats.

What’s it going to cost me?

The CSC FT1000MD is obviously not going to be a cheap bike. And the $3,295 price tag confirms it. I always look out for my readers when I can though, and so you can take an extra $200 off the price with the discount code ELECTREK.

While it certainly sounds high to outsiders, the $3,295 price is about par for the course when it comes to Bafang M620-powered e-bikes. Many e-bikes with this drivetrain cost even more. It’s a specialty motor that requires powerful batteries and high enough quality parts to keep the bike safe at these performance levels.

I’ve ridden plenty of M620 e-bikes that cost more. And so while I’m sure seeing a $3k price tag will shock anyone new to the e-bike industry, this is just the going rate for something on the highest end of the power scale.

And don’t even get me started on the $6,000 fat tire e-bike coming out later this year that packs in even more power…

Obviously this is not an e-bike for everyone. CSC has some great 750W fat tire e-bikes that will take you to a comfortable 28 mph (45 km/h) and use more economical hub motors, bringing them in at $1,500 less.

But if you want a crazy powerful mid-drive motor with built-in torque sensor, larger batteries, better parts and the most extreme performance you can get, this is CSC’s top of the line offering.

It requires a responsible rider, not just one with deep pockets. This much power can be dangerous to the rider or others around them if not used responsibly.

But if you can handle it, the CSC FT1000MD can deliver it. And then some.