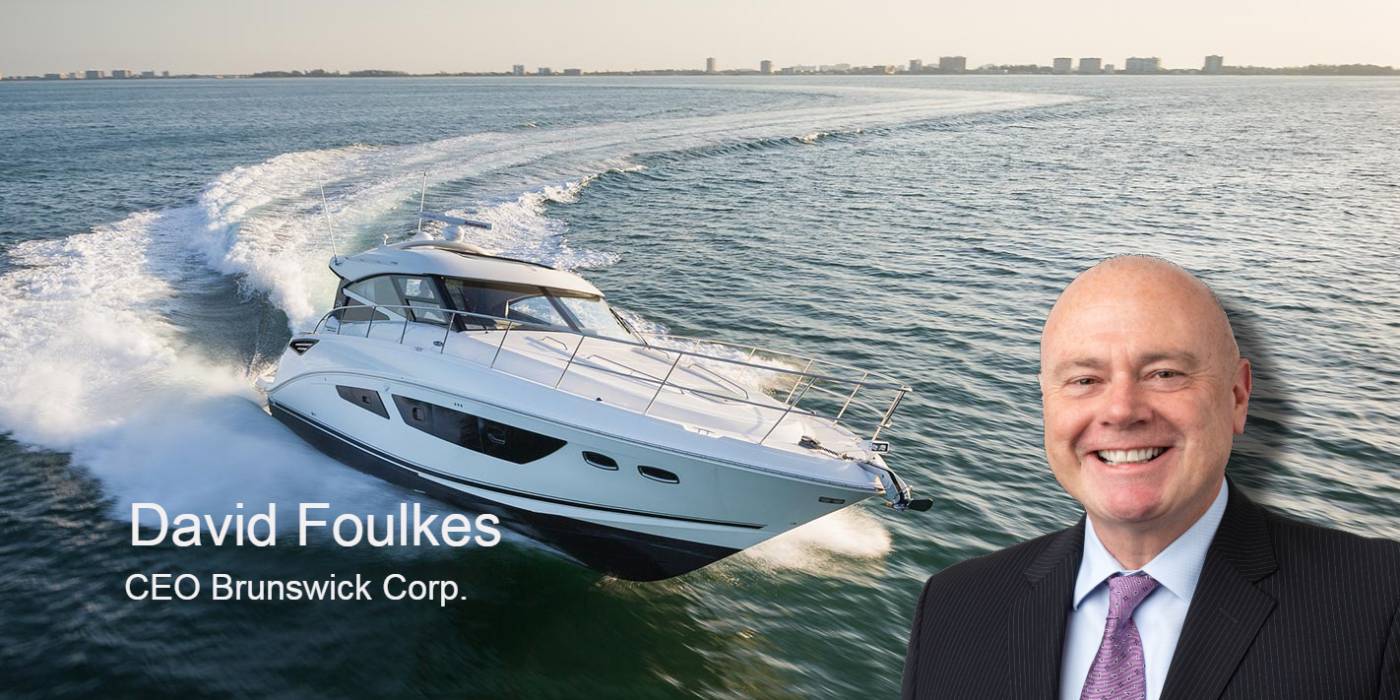 Brunswick CEO Dave Foulkes is an interesting guy: one of that rare breed of executives with a technical background that allows him to see the road ahead with a clarity that someone with a— less technical background might not have. With career credits like “Powertrain Chief Engineer” at Ford and “VP of Product Development, Engineering, and Racing” at Mercury Marine leading him to the big chair, Foulkes’ vision of the future of boating is worth seeing.

It was a cold and windy Chicago afternoon when my phone rang with an unfamiliar Michigan phone number – but the voice on the other end of the phone was warm and cheerful. “Definitely not boating weather,” I said.

Dave laughed, good-naturedly, and we transitioned so easily into a conversation about the crossover history of Mercury Marine and the Chevy Corvette, his time at Ford, and the bizarre nature of virtual trade shows that I didn’t even start taking notes until he dropped this one on me: “Electrification, automation – all of the things we were talking about at CES, really – they’re all about the democratization of boating.”

I immediately called bulls**t, and that’s where this interview (and my notes) really get going.

Dave explained that the boat market isn’t really what it looked like if your main exposure to it was (as mine was) events like the Miami International Boat Show. “The big, expensive boats are the ones that get attention, and they’re the ones you’re most likely to see and read about,” he explains, (I’m paraphrasing, a bit). “But they’re just a small part of the market. The vast majority of the market, especially the outboard market, is in small engines. They’re usually less than 10 hp, and you’re talking about a market of tens of thousands of units, globally.”

Foulkes told me about the ever-growing number of regulated lakes that limited or outright banned internal combustion motors in Europe, which primarily impacted recreational fishers and lake house owners who “just want to get on the water.” “That’s where you’re going to see the first big move towards electrification in terms of propulsion,” he says. “The expectations of range and performance are a lot lower on a small lake than they are out on the ocean.”

If that line about range and performance expectations sounds familiar, that’s because it is. In fact, it’s lifted almost a word-for-word from Brunswick’s CES 2022 presentation – which we covered last week, and which brought us back to the topic of that deck: ACES.

“ACES stands for Autonomy, Connectivity, Electrification, and Shared access,” says Dave. “We went with this approach because we realized that we wanted operating a boat to be as similar, and as engaging as driving other vehicles—”

“Right,” I interrupt. “You always hear people say, ‘it drives like a boat,’ like that’s a bad thing.”

For those of you who are unfamiliar with the industry, you should know that Brunswick is a giant in the recreational boating world. They’re the biggest player in that space, overall, and by far the biggest in North America, with a global footprint that reaches Europe, Asia, and Australia. They sell a lot of boats, in other words, have a lot of customers, and more than 150 years’ worth of knowledge to build on. So, when Dave starts telling me who was buying boats, I believe him – even if I do experience a bit of cognitive dissonance during the explainers.

He goes on to explain that the most common obstacle to boat ownership isn’t necessarily money, it’s the actual boat, itself. As in: how do you drive it?

“That’s where that ACES comes in,” he says. “The easier we make docking, the more intuitive it is to navigate the boat and really avoid hitting something, the more comfortable that novice operator is going to feel on the water.”

Electrification, too, plays into the Brunswick “make it easy” mentality. Here, Dave explains that the onboard gas generator that traditionally powers things like the refrigerators, lighting, and other accessory electricals (the “house load,” as he calls it) is a pain point for most customers. Not because it doesn’t work, necessarily, but because it’s a system that many first-time boaters aren’t familiar with.

As we previously covered, replacing the gas generators with li-ion battery packs has a massive impact on carbon emissions. It also makes the boat’s mechanical systems work more like an EV and the “house load” more like a house – things that the operator is probably more familiar with.

Making a boat easier to use, though, only makes it easier to buy if you could afford it in the first place – and adding technology to a product doesn’t usually lower the price of that product.

To that end, Brunswick has launched acquired (correction) something called Freedom Boat Club. Similar to the subscription models being offered by an increasing number of automakers (and, more recently, electric boatbuilder Candela), the Freedom Boat Club allows members to effectively reserve a boat for a given time, then show up and take it out.

Dave sells it enthusiastically. “For someone who wants to be able to take a boat out a few times a year, but doesn’t want to deal with a marina or a home dock or towing a boat out, it makes perfect sense,” he adds. “And that automation and connectivity makes taking that step, from being a non-boater to joining Freedom Boat Club, seem a less daunting task.”

I reached out to Freedom Boat Club in Chicago, separate from the Dave Foulkes interview, and talked to “Storm” about membership. It was a no-pressure experience where my questions about the process were answered in a friendly, straightforward manner. When I asked questions about what kind of boats were available, he invited me out as a guest to the Northern Illinois Sports Show, where the club would have several of the available models for me to experience firsthand, and referred me to an online cost calculator that would allow me to compare some typical costs of boat ownership to the Freedom Boat Club’s subscription model.

They’d even make sure the boat’s onboard batteries were fully charged when I picked it up.

Whatever my expectation was of what the Brunswick “boat club” thing might be like – something between airport car rental desk and seedy Orlando time share meeting, if I’m being honest – I definitely left my interactions with Storm feeling like I’d be doing a smart thing by subscribing to a boat instead of buying one.

Maybe, if Dave gets this right, the best two days of a boater’s life won’t be the day they buy the boat and the day they sell the boat.