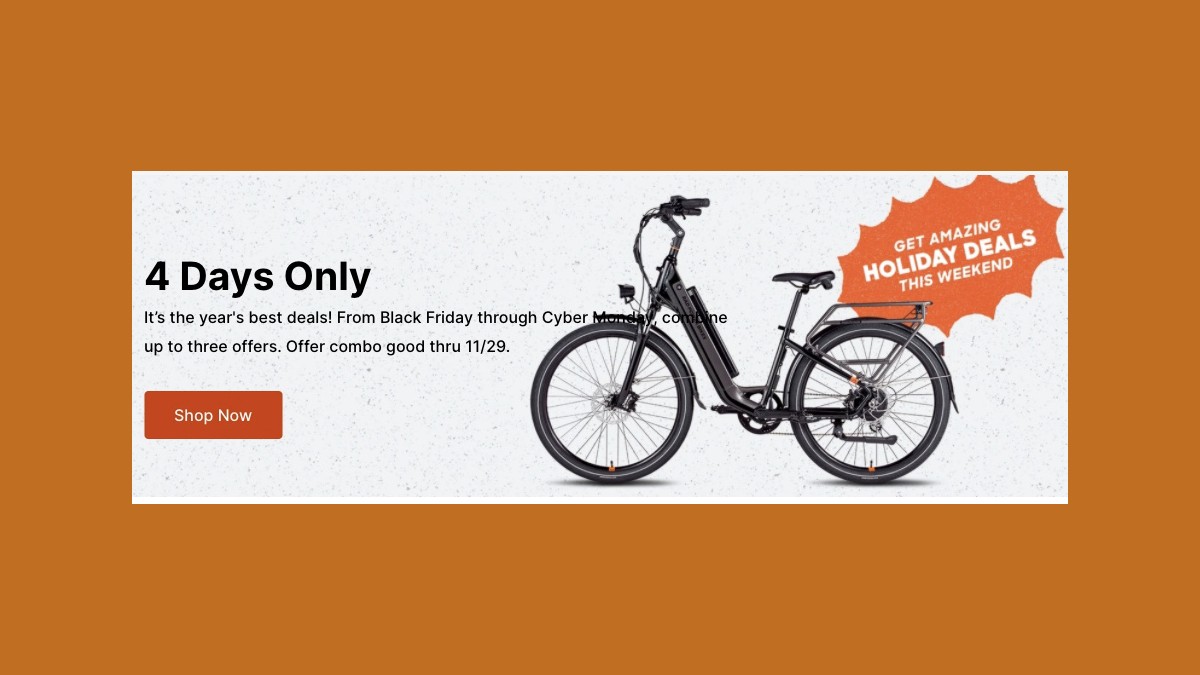 From our friends at 9to5Toys, we’ve rounded up the best electric bike deals for Black Friday 2021. Head below for the skinny.

First up is the most popular e-bike brand in the US, RadPowerBikes, which offers $100 off and free shipping on four of its most popular bikes including RadRover fat tire bikes, which are great for winter jaunting and start at $1,499. Bonus: You’ll get $100 to spend in the New Year on any purchase at Rad.

Best e-bike deal of the year

Probably the best bike deal of the year is the Lectric XP 2.0 foldable fat tire bundles at $949. In addition to one of the most popular folding 28 mph bikes, Lectric is throwing in a better seat, suspension seat post, premium headlight, and bike lock. At $949, these folding bikes go to class 3 speeds and feature fat tires, rack, and lighting. $1,000 won’t get you more bike anywhere.

These bikes are a ton of fun, and you can even save that $100 off Juiced’s new RipRacer.

Bonus: There are a ton of Juiced accessories on sale including phone mounts, passenger kits, and horns.

Probably the biggest Black Friday Discount is the $1,000 off given by Harley Davidson’s Serial 1 e-bike Brand. I just rode one of their bikes around Los Angeles for a week and loved it. These bikes are pricey, but with premium components, great heritage, and amazing performance, they deliver.

We’ve reviewed several of Ride1Up’s electric bikes over the past few years and have found them to be solid options in the commuter market with excellent bang-for-your-buck.

They’re currently running several sales that between $100-$250 off of different models (or $450 off of two e-bikes), though some frame sizes and colors aren’t included.

If you’re looking for a recommendation, we recently reviewed Ride1up’s $1,545 700 Series e-bike and found it to be an awesome commuter option with hydraulic disc brakes, long-travel suspension, included racks/fenders/lights and more.

On the more budget end, the $895 Roadster V2 is likely the best deal out there for a belt-drive e-bike right now.

Ariel Rider also has a great sale going on their most affordable option, the Ariel Rider Rideal.

This metro-style e-bike is priced at just $899 during the sale, yet offers 750W of power, 20+ mph speeds, lights, front/rear rack mounts and a 7-speed Shimano drivetrain.

It’s a fairly obvious imitation of the RadMission, yet ups the ante with more power and more features, like that multi-speed drivetrain.

E-bikes that are really motorcycles

Wellbots has the Segway X160 Dirt bike on sale for $2,999.99. That’s $500 off and a match of the lowest price we’ve seen on this rebrand of the Sur Ron Light Bee. Unfortunately this is available in any color as long as that color is silver. Wellbots has a ton of other ebikes, scooters and all manner of transport devices on sale for Black Friday.

Evelo is knocking up to $600 off and throwing in a $100 gift card. One of our favorites here is the Aurora Hub-Drive. Subtract $200 more if you buy a second bike and knock another $100 off with code REF-RV0LL3D5KXYPQ2

If you are looking for the cheapest possible price on a usable ebike Ecotric is having a 20% off Black Friday sale on all of its bikes including the Vortex City bike which is $560 after discount or popular folding Starfish which plops down to $624 shipped after “BF20” discount.

I wouldn’t necessarily recommend this to anyone I didn’t dislike but the lowest price full sized ebike we’ve seen is likely they Hyper Mountain Bike at Walmart for $398.

We’ll be updating this post throughout the day, so keep it locked on 9to5Toys and feel free to suggest any other electric bikes we might have missed.

If you’re more of a scooter rider, you’ll want to check out some of the best deals for smaller-wheeled EVs.

Fluidfreeride isn’t only offering hundreds of dollars off of their best scooters, but the company is also partnering with Trees for the Future to plant 100 trees for every scooter sold.

Check out all of FluidFreeRide’s sales here.

Apollo Scooters is a Canadian scooter dealer that works closely with Fluidfreeride and has an impressive lineup of their own custom electric scooter designs.

They are currently running a series of bundle packages designed to get you riding with a friend or loved one by offering a free scooter with the purchase of a larger, more powerful model.