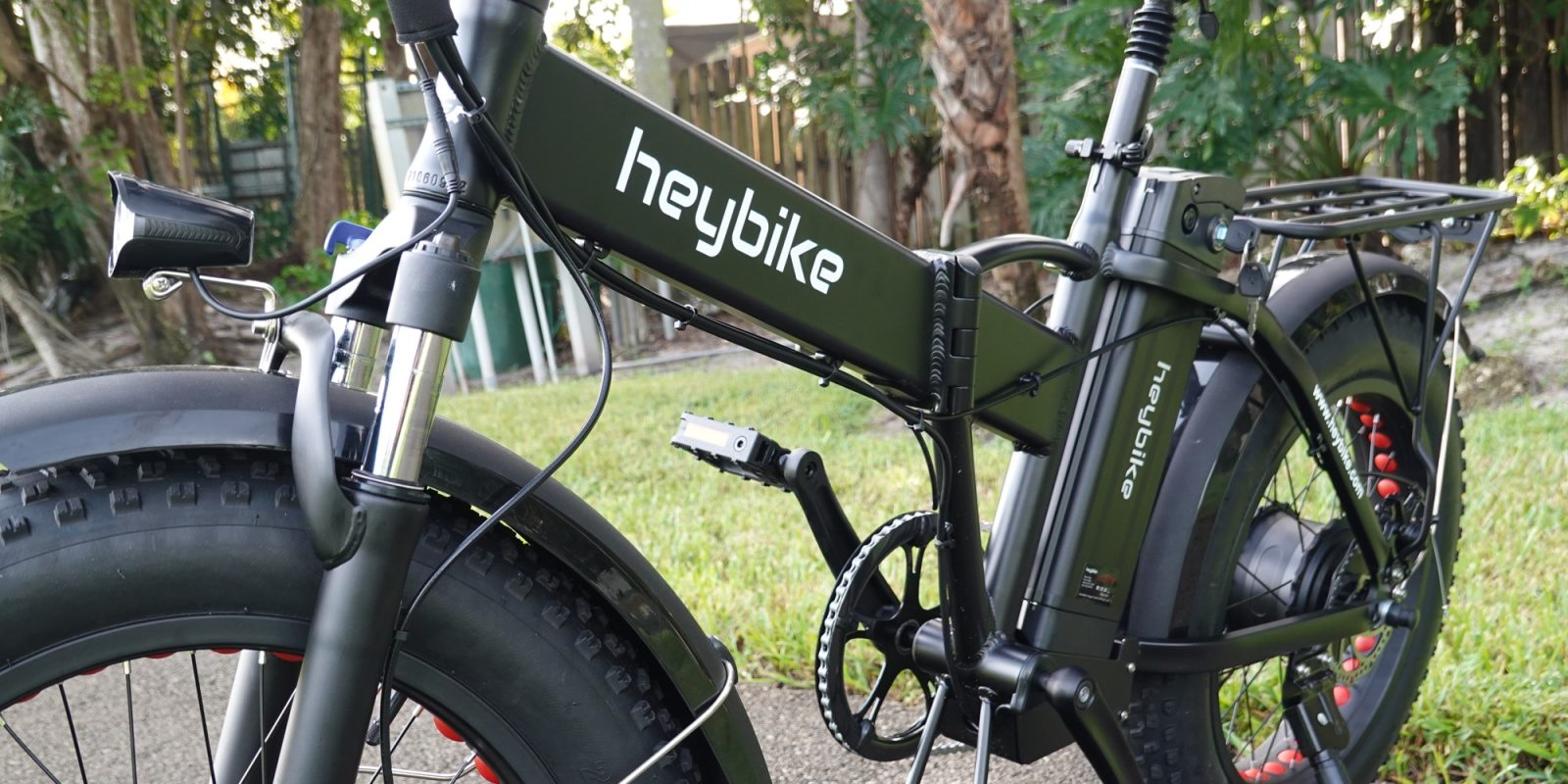 Electric bicycles have never been more popular as riders all over the world flock to two-wheeled EVs for both fun and transportation. Fat tire bikes are their own popular category of e-bikes since their large tires allow them to ride over all sorts of terrains. The HeyBike Mars is a special type of fat tire e-bike that folds down for easier transportation, meaning you can take that ride-everywhere fun on the go with you.

Folding e-bikes are usually small and nimble, while fat tire e-bikes are typically much larger and heavier.

The HeyBike Mars strikes a balance in the middle, offering portability without sacrificing fun.

It uses a two-step folding design that you may be familiar with if you’ve used a folding e-bike before.

To fold it, you start at the handlebars and pull a safety mechanism to release the folding lever. The handlebars will tilt back and down, tucking in next to the front wheel. Then you do the same operation at the hinge in the middle of the bike, folding the bike in half.

You’re left with a transformer-looking contraption that can now fit in the trunk of a car, yet reopens into a full fat-tire e-bike.

For power, the e-bike houses a 500W hub motor in the rear wheel. A twist of the handle throttle gets the bike flying up to 20 mph (32 km/h) thanks to that powerful motor.

To help with hills, a Shimano 7-speed transmission is included with a shifter on the right side of the handlebars. Dropping into a lower gear can make the pedaling easier on hills or at low speed, and then shifting up into highest gear gets the bike going fast again.

There’s also a digital display that shows all of the important information such as speed, battery level, pedal assist level, distance, etc. It’s easy to read even in bright sunlight. You can see it in action in my video review of the bike above.

The fat tires have large air volume which helps them to roll over various obstacles. An added benefit of the giant tires is that they add more cushion to the ride and help absorb the shock of hitting obstacles. To add even more suspension, the front fork has built-in suspension to improve the ride quality even more. The rugged frame even has a 330 lb (150 kg) weight rating, opening the option for a wider range of riders.

Cradled in the frame and tucked behind the seat post sits the removable battery. It is securely locked with a key (which is important in high crime areas) and blends into the colorway to prevent it from detracting from the look of the bike.

A keyed lock allows the battery to be removed for times that the owner may want to charge it away from the bike, such as for anyone who parks on the street but wants to charge indoors.

HeyBike says you can get up to 37 miles pure electric (or 48 miles range per charge pedal assist) from the battery, which has a capacity of 600 Wh. That’s more distance than most people ride in a day and should be plenty for the average recreational rider or commuter.

With that much range, your riding might keep you out after dark. To stay safe, the HeyBike Mars comes with front and rear LED lights that run off the main battery. That means you’ll never have to worry about replacing little batteries in your lights like typical bike lights. Instead, the lights always have power since they draw it from the main battery.

All of these features are included for a low price of just $999, well below the average cost of a new e-bike these days.

As much fun as the HeyBike Mars is thanks to those fat tires and utility folding frame, some riders still prefer a more classic city-style bike.

In that case, you’ll likely want to check out the HeyBike CityScape e-bike.

It retains most of the same features of the Mars, but has larger and narrower tires that city riders may be more accustomed to.

You can see the CityScape in action in my video below.