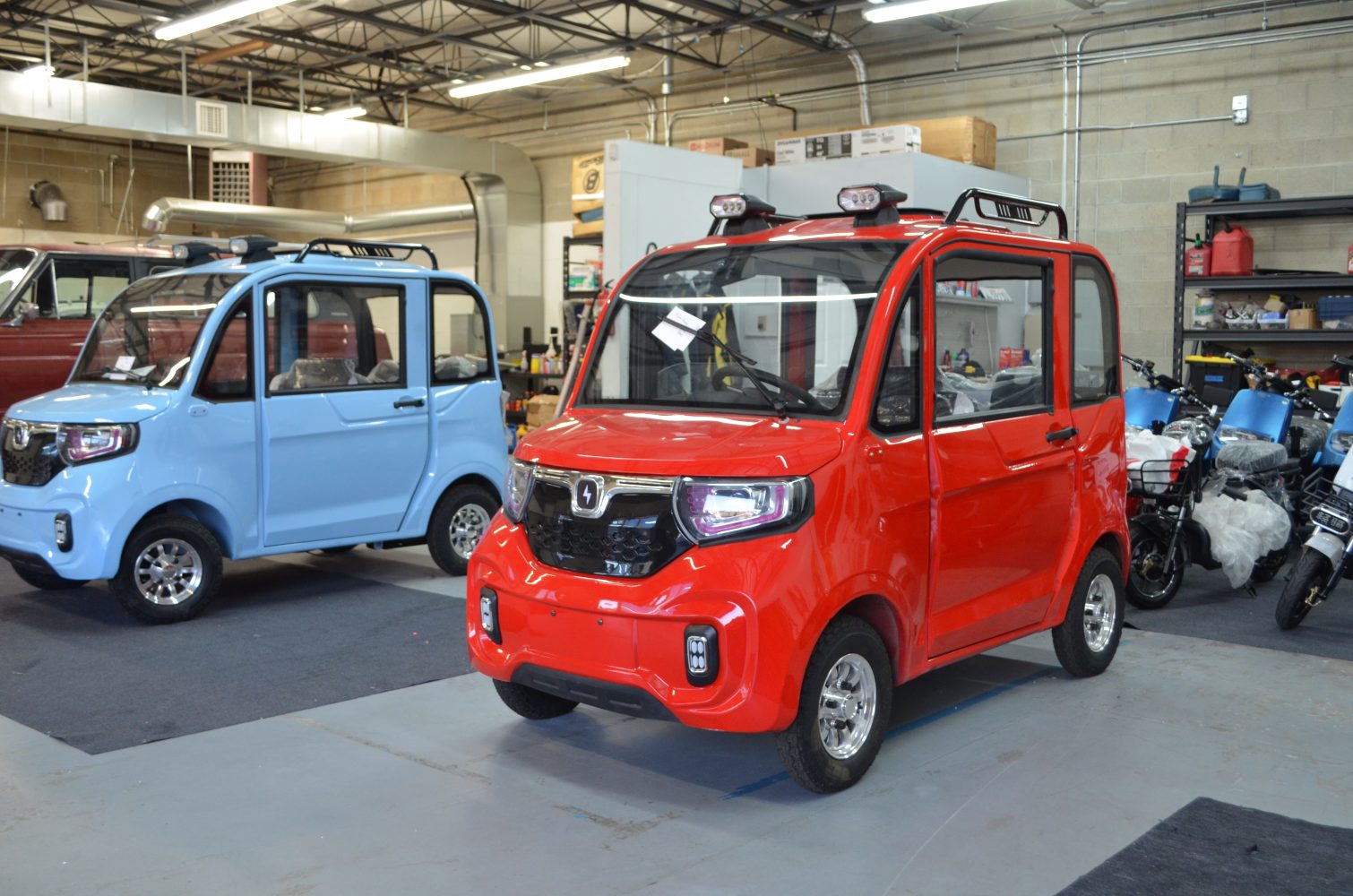 Electrek was invited to try out the cheapest EV in the world, which is manufactured by Changli. It was hilarious, cute, “cheap” in every way, and a wild exercise for the imagination. Even though it doesn’t retain its famed price tag, the US importers have put great effort into adding back value where the shipping costs took it away.

Changli manufactures these vehicles in China to be used as taxis and personal transportation. Vehicles like these are used by urban-dwelling workers to get around a dense landscape. Working people in China are attracted to them for one principle reason: These cars are cheap.

We’re talking lead-acid batteries, the cheapest plastic dashboard you’ve ever seen, stickers instead of fog lights, and steering that I would describe as having a learning curve.

It goes without saying that you won’t find a tech-heavy interior with a software-driven experience like we’ve seen from forward-thinking automakers. The Changlis are brass tacks basic, which has a certain appeal.

Electric Import Motors (EIM), importers of these cheap micro cars, got into the business as a joke. After seeing an article about the cheapest EV in the world, EIM put its prior experience in shipping and logistics to use and sourced its first car. Changli vehicles hit the news over a year ago when news outlets headlined the $900 price tag. True, it was $900 before the current global shipping problems and if it’s bought in China, but shipping and associated costs make up the majority of the “real” price for anyone outside of China (as fellow Electrek writer Micah Toll found out when he purchased one from China). The first EIM order prompted another order of a few tailored cars for the US market. Without an ounce of marketing, those were sold almost instantly.

Now the joke has some serious legs. Despite the increased shipping price, EIM has sold several containers’ worth of cars by now and pre-sold them for about six months. So, what’s the big deal? Why are these tricked-out grocery carts so popular?

What really makes these so fun and unique is the cost and the size. The most obvious comparison in size and scale is a golf cart. In the good old days before the pandemic, a golf cart would start at around $7,000 to $8,000 without windows, doors, heater, etc. On the other end of the chasm is a full-sized car. Electric cars are great. At Electrek, we live and breathe them every day, but our favorite full-blown EVs can be expensive and overkill for simple uses.

How to get a Changli vehicle in the US

The “Grunt” car can go about 20 miles on a charge and do roughly 25 mph. This is a great option for running around town, grocery trips, post office runs, or other short trips on slow roads. It can seat two adults in the front and two kids in the back.

With the “Pak Yak” truck, like Micah bought, the larger battery and motor setup allows it to go further, faster, and of course, to haul more. You can expect about 40 miles of range, and a top speed of 35 mph. This opens doors to even more possibilities, such as moving lawn debris, hauling car parts, or even moving (very small) pieces of furniture. The Pak Yak truck can seat two adults.

Keep in mind that Changli vehicles are not homologated for on-road use in the US and do not meet the required Federal Motor Vehicle Safety Standards for their class of motor vehicle. Thus, they are not street legal in most areas of the country.

We had a chance to sit down with Caleb Nelson, founder of Electric Import Motors.

So, as a one-stop-shop, EIM now imports the cars to provide customers with one easy-to-understand cost. A base model car costs $6,500, while a truck will run you $8,500. Shipping to your door could run around $800, possibly less. As of writing this article, we are still in the midst of the global pandemic, and rippling shipping industry chaos. The shipping raising the cost of soup, nuts, and Changlis hasn’t stopped the American buyer – as Nelson points out, containers are still selling out.

EIM aims to add value to the equation by taking care of all the necessary paperwork and ensuring safe and proper delivery of the cars during each step of the journey. Completing the proper paperwork is key, as Uncle Sam’s punitive fees can explode into hefty fines when done improperly. Since EIM is importing entire containers at a time, the company can ensure that no other cargo is shipped inside, which risks damage, and EIM inspects the vehicles before the final US shipment.

For now, this pet business is still importing, and they are sold out for about six months from now. If the market continues to pine for small EVs, we might see other makes and models on American roads very soon.

There are quite a number of micro-cars and personal mobility items that fit a particular niche, but with the exception of electric bikes, none of them have really become mainstream. I think the primary reason is quirkiness and value proposition.

The EIM Grunt and Pak Yak were so much fun to drive that it was like being a kid again. It was so small and quirky that I was grinning from ear to ear the whole time. People were looking and staring, and several stopped us to ask about the vehicle and its origins. Some people really like being the center of attention and enjoy showcasing a new way to look at transportation (actually, a lot of us at Electrek are that way), but that’s not a common personality trait in the real world.

If the Changli vehicles were $900 in the US, they would be on every street in America. At that point it wouldn’t be rare anymore, it wouldn’t be strange or quirky. It would just be normal.

Since these cars have a higher price, they will primarily be in the hands of green-tech extroverts that will make a big show about their oddball purchase.