First look and test-drive with the Lucid Air Dream Edition: An addictively speedy work of art 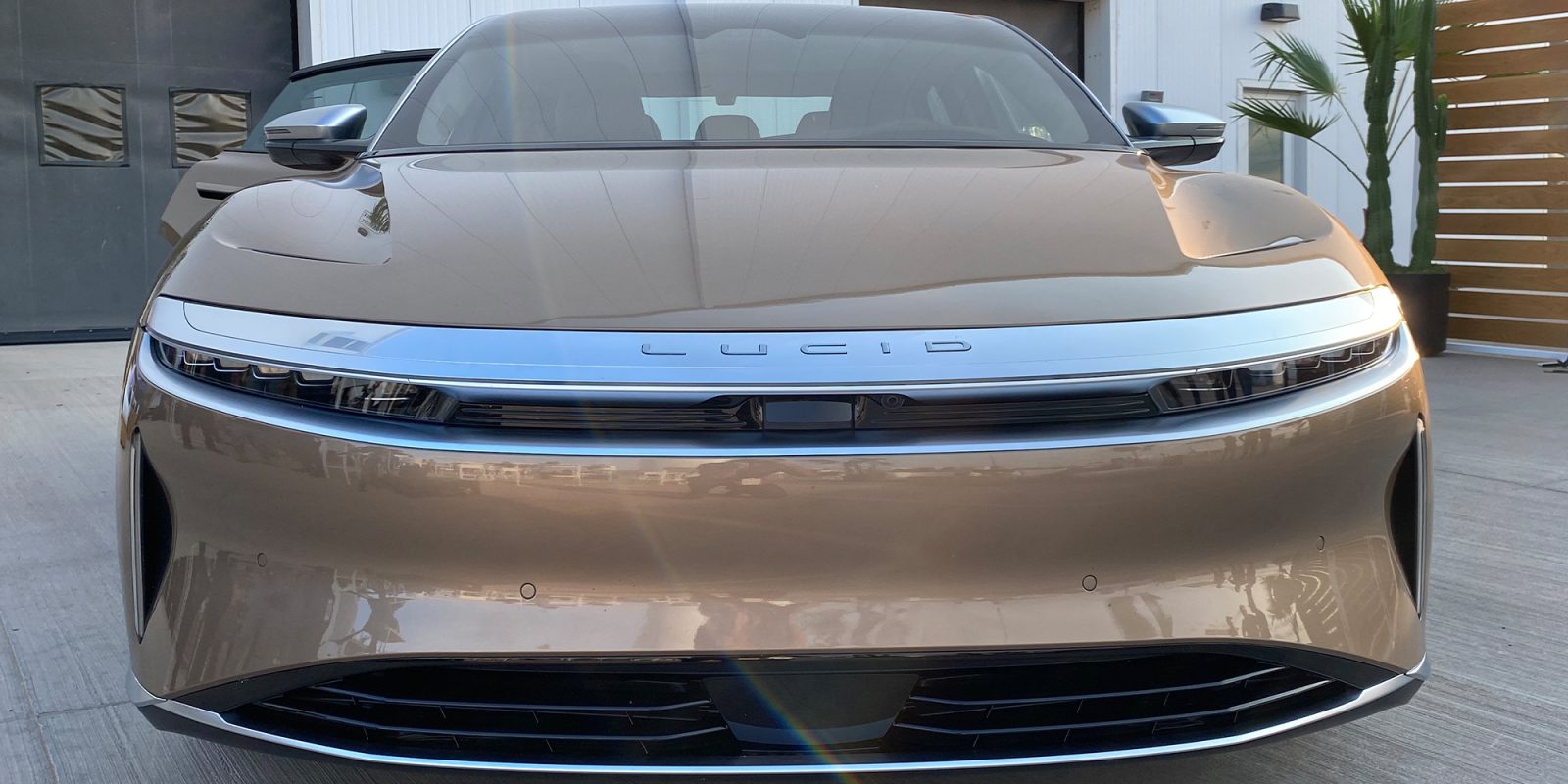 As part of my journey through Arizona for Lucid Motor’s “Production Preview Week,” I was able to catch a glimpse behind the scenes of the automaker’s facilities where the Air sedan is being produced. Even better, Lucid gave me the opportunity to be one of the first non-employees to test-drive the Air Dream Edition – I went for the 1,111 horsepower on the Performance version. Here’s how it went.

For over a year, Lucid Motors has been teasing its flagship Air sedan, consistently sharing new details of its features alongside its progress toward series production.

While the Dream Edition trim of the Air was originally scheduled to arrive in spring 2021, Lucid announced production delays, pushing the delivery window to “sometime in the second half of 2021.”

Now during its “Production Preview Event” in Arizona this week, I had the opportunity to gain exclusive access to Lucid’s Powertrain manufacturing facility, as well as its Advanced Manufacturing Plant or AMP-1, where the customer-quality Airs are currently being assembled.

It was at AMP-1 that I was able to get inside all four versions of the upcoming Air sedan to see them up close, and test-drive one myself.

Experiencing the Lucid Air in person alongside a test-drive

Lucid hopes to make a splash in the luxury EV market with its initial offering in the Air. The Dream Edition trim itself is a marvel to see in person with a hefty price tag to match.

Initial cost aside, The Dream Edition Air is as sleek and luxurious as it is functional and efficient. In speaking to an impressively approachable roster of VPs, designers, and operations managers, the quest to deliver the very best within every square inch of the vehicle makes it a site to see.

What I found even more impressive that the beautiful and intuitive aesthetic of the Air, was the technology that makes it go… and it certainly does go. There’s a lot to dig into on this upcoming electric vehicle that will finally see customer deliveries next month.

Let’s start outside the Air and work our way in. As you can see from the images below, the exterior of Air Dream Edition is both sleek and aerodynamic. It was designed with jet aircrafts in mind, offering a streamlined body that doesn’t give away how truly spacious the EV is inside (more on that later).

The slots on the hood allow air to travel from the front of the vehicle in motion, through the body and out toward the side mirrors. This allows for a more aerodynamic ride and better range efficiency.

The front and rear lamps were beautiful as we reached golden hour outside of Lucid’s AMP-1 facility alongside the Air test-drives.

Like much of the vehicle itself, these lights were developed with a minimalist approach to stylishly include only what was necessary. Again, evidence of the efficiency throughout every detail inside and out of the Air.

The trunk offers competitive cargo space, but it’s the front trunk storage that really stands out. In fact, Lucid told us that its 280 liters of space is the world’s largest frunk, and its unique one-piece mold recently won the company a design award.

Moving inward, Lucid’s clean sheet design on the Air has provided its talented designers like Derek Jenkins and Joann Jung a blank canvas to paint top-notch luxury and comfort upon a technologically advanced electric powertrain system.

In speaking with Jenkins at the test-drive event, he told me that starting from scratch also gave the Lucid team more freedom to redefine what luxury is today, by utilizing technology and efficiency.

The first thing you notice is the overall roominess of the Air’s interior, especially in the back seat. What’s unique to the Air compared to other vehicles, is how much larger it feels inside than it looks outside, and that’s no accident.

The unobstructed glass canopy roof provides an additional breath of openness, while its infrared light-blocking tint still provides protection and safety from the world above.

Much like the exterior, the displays and vehicle setting interfaces have been minimized and streamlined to only include what you need with a single tap.

Jenkins said he and his team made conscious efforts to avoid Air customers having to scroll and tap through multiple menus.

What I thought was cool and not something I recall in other vehicles was the decision to allow for two different colors for front and back seating. Notice in the images I took how the front seats are black, but the entire backseat is white.

In addition to experiencing all four trims of the upcoming Lucid Air up close, I was finally able to get behind the wheel of a Dream Edition and test-drive.

During a brief moment at the AMP-1 event, I was able to sneak away to Lucid’s test-drive section and fortunate enough to find myself inside an Air Dream Edition P (Performance) and its 1,111 horsepower.

Alongside me for my maiden voyage was John Culliton, a vehicle dynamics technical specialist at Lucid, who talked me through a lot of the development that went into the Air to get it to the level of performance it currently sits at, as EVs begin to roll off the assembly line.

Upon departing AMP-1 and exploring the desert highways of Casa Grande, I immediately noticed the quietness of the interior. The steering and suspension were firm but smooth, perfect for a leisurely cruise with the occasional zip around a clover on-ramp, or a punch past a slow semi-truck.

As I mentioned before, I found the displays and settings intuitive, in that I didn’t have to search for anything, and every switch or toggle I needed to operate was in close proximity to my fingertips.

In this sense, I felt comfortable in this new vehicle almost immediately, as if I had driven it before… perhaps I’m just a quick learner. Speaking of quick – when I got a chance to hop on the highway and really open the Performance Air up I was taken aback… literally.

As John explains to me in the video below, the Air will offer three drive modes: Smooth, Swift, and Sprint. From what I gathered in speaking to others at the event, not everyone was able to (or trusted enough?) to test to sprint mode… but I sure was.

The instant torque delivered acceleration more reminiscent of jet travel than a car ride. I came off the on ramp at around 30 mph and immediately punched it – that is where things got interesting.

The initial acceleration from 30 to about 55 or 60 mph was quite fast, but the back of my head was not buried in the headrest… at least not yet. 60 onward was an absolute blink of the eye, and before I could even register what was happening I was going over… okay, let’s just say I was going just a bit over the speed limit.

That additional punch of pure, unimpeded speed was truly amazing to me, and I’ve never experienced acceleration like that. I’m wholeheartedly addicted. In speaking to Lucid CEO Peter Rawlinson after the event, he explained to me that what I had experienced was an intentional design.

Rather than focus on traditional 0-60 mph track times, Rawlinson explained that he and his team were more focused on delivering nasty speed to more real-life driving experiences, like when you’re already going a lower speed and see some open road, or when you’re looking to quickly pass a flatbed carrying a ton of logs or pipes (instant grounds for switching lanes, right?)

Whether it’s a sprint off the line, or an additional boost while you’re already cookin’, the Dream Edition P is certain to delight drivers who like to go fast. I may or not be shaking as I right this, experiencing speed withdrawals after pushing the Air as fast as my conscience (and heart) could take.

Below is (some of) the footage of my test-drive with John. Strangely enough, half of my ride was corrupted and lost, so you won’t get to see the sheer joy and catharsis on my face as I get the Air on a straightaway. As one of the first people to test-drive this beast for you all, I’m truly bummed, apologies.

I suppose I’m just going to have to finagle another test-drive with Lucid, maybe two or three. I can stop whenever I want, okay?