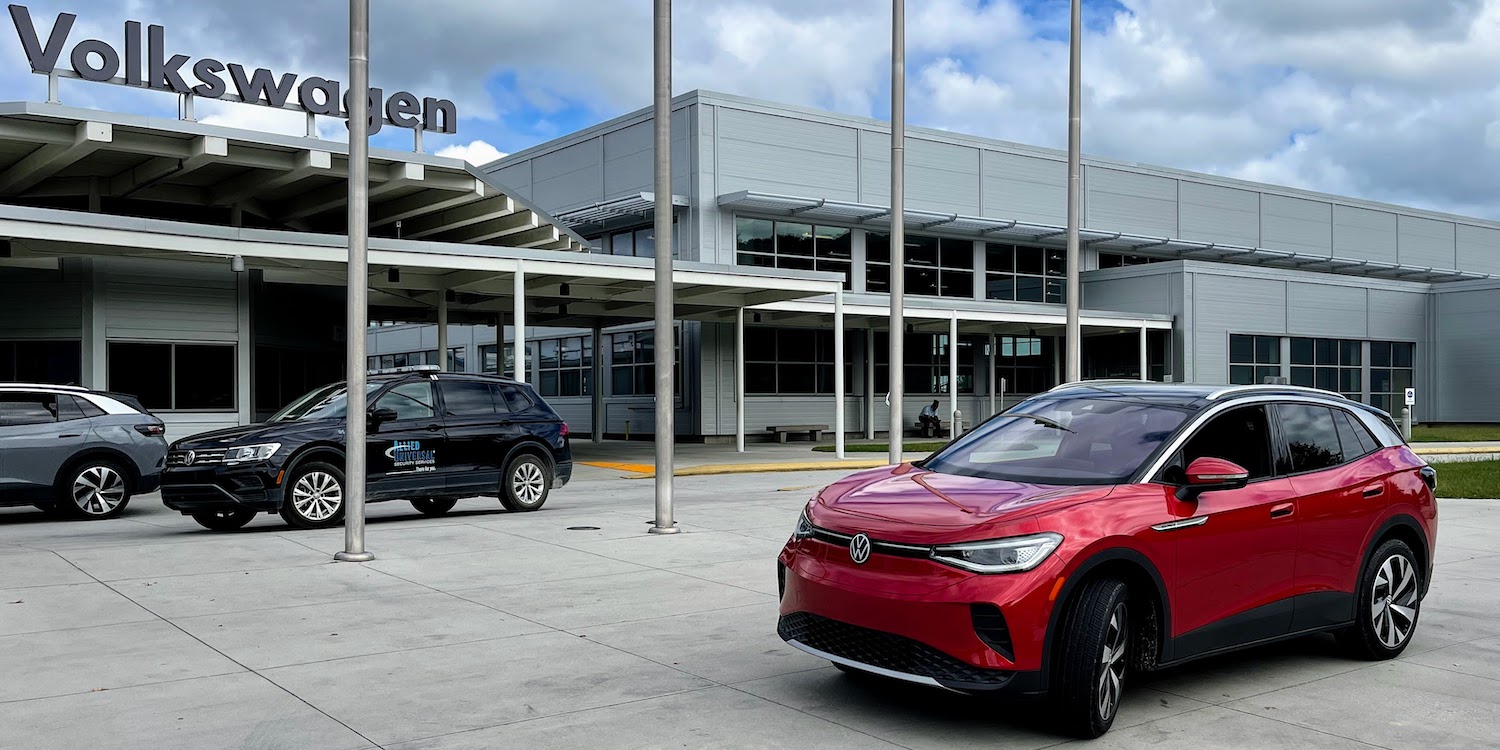 VW invited Electrek to their Chattanooga factory location to check out the new AWD ID.4, which ups the electric SUV from around 200 to 300 horsepower with a front-wheel-drive motor. Even better, next year, North American units of the ID.4 will be built locally at the huge VW factory in Chattanooga, Tennessee, which we got to see first hand…

I got a few days to look at the RWD 200 horsepower ID.4 in March right before a blizzard this year and found it to be an excellent car, but not suited for my very steep, unplowed driveway in a snowstorm. The big takeaway for me was that this was an EV anyone could jump into and drive right away. No weird doors like the Mach-E, and no center only display and spartan interior like the Tesla Model Y. Just a great car for ICE converts that don’t necessarily read electric car websites regularly.

My complaints however, fell into a few general areas…

The AWD ID.4 is almost entirely the same car outside and inside. There’s no frunk space to be taken up by the extra motor, and besides the AWD label on the sides and 0.6-inches more of ground clearance, it appears identical to the original RWD models. Oh, the VW logo on the front lights up — which isn’t the case for all the RWD models or in Europe.

If the spec sheet didn’t obviate the first two demerits on my list, a few seconds behind the wheel sealed the deal. The 300 horsepower, 339 lb-ft of torque, and 5.4-second 0-60 is plenty fast enough for most drivers—putting the AWD ID.4 in the same class as the standard Mustang Mach-E and Tesla Model Y. The top speed is around 112 mph… or so I’m told.

Since the electric drivetrain is silent, it destroys VW’s main two ICE competitors, the Toyota RAV 4 and Honda CR-V, seemingly without even trying. I can’t imagine anyone test driving these three cars and coming away without the ID.4 in a distant 1st place on driving alone. Oh, and it has an impressive 36.4-foot turning radius.

To our luck, a glitch in the car’s native navigation system had us going on a dirt road in the mountains around Chattanooga, so we unexpectedly got to test out the suspension and all-wheel drive off the asphalt.

I can say that it passed with flying colors. I’m not sure if the large 20-inch wheels or suspension was the differentiator, but this is a road I wouldn’t have felt comfortable taking my Model Y on, at least at relatively high speeds. We’ll have a video of the experience up this weekend.

While we didn’t get to test the ID.4’s towing capacity, it’s rated for 2700 lbs. and comes with a tow hitch already installed. I imagine that 250 miles of range drops significantly with a camper on the back.

ID.4 Over The Air updates wanted!

The native navigation glitch was one of many cringey center stack issues that are still the sore thumb on this car. The upside is that once you are in CarPlay or Android Auto, all of the glitches go away and most people I know with CarPlay or Android Auto use it almost exclusively over the vehicle’s native navigation and entertainment systems. With wireless CarPlay and both USB-C and wireless charging options, it is super easy to get into CarPlay and stay there.

VW says it will continue to update the center stack OTA making it quicker and more reliable, but we’re almost a year into launch—I think we’re officially lagging here. The navigation system, which I think is powered by Nokia’s Here Maps, seemed like it wanted to put us into a Deliverance scenario, directing us into a dilapidated home with wild dogs and car parts all over the yard. The only thing missing was the dueling banjos.

Speaking of lagging OTAs, the gold standard of charging, something that every EV engineer should have at the top of their list, is the Plug and Charge standard for EV charging. The Ford Mustang Mach-E and VW’s sibling brand Porsche Taycan can go to a (VW-owned) Electrify America station and just plug in –as can all Teslas at their own proprietary stations. With VW’s ID.4, you currently need the app or an RFID transaction.

We asked again this time, as we did back in the winter, about when Plug and Charge was coming and again we’re hearing that it is in an upcoming OTA.

VW made available US CEO Scott Keogh, Product Manager of EVs Jeffrey Lear, and Dustin Krause, former Tesla exec and VW e-Mobility Director, and I got to corner them at the bar ask questions to the 3.

Plug and Charge when?

Jeff: It is high on our priority list but getting the ID.4 and now the AWD ID.4 out the door was obviously our highest priority. We’ve done that and now we’re focusing on the smaller things. We’re even working on Bi-Directional charging in future models but don’t have anything to announce today. We’re also working on that center stack. [There was some ambiguity about if current VW ID.4 models would be able to get bi-directional charging as a software update]

How do you feel about the current Democratic administration legislation moving its way through Washington stipulating that automakers with unions will receive higher subsidies on EVs than those like VW, Tesla, Nissan, etc without?

Scott: Why should workers in Detroit get favorable incentives over workers in Tennessee? We don’t think it is right and we plan to fight to level the playing field.

Who made the decision not to bring the ID.3 to the US and why? You are still seeing success with the Golf and GTI in the US so why not electrify that product category?

Scott: The decision was made jointly with the US team and German HQ. The rationale was to put the all the wood behind the ID.4 at launch. The direction things were heading was toward bigger cars and SUVs in the US (not to mention Europe and China that are seeing the same trend). In fact, we think the ID.4 will outsell the ID.3 in Europe as well.

If you had known that Chevy Bolt sales would be *going up in flames* would it have changed the calculus on the ID.3?

What are we going to see next from VW in terms of electrification in the US?

Dustin: Next up for the US is the return of the iconic Microbus in the ID.Buzz form factor. This will be a 7-8 seat transporter that we’ll see in the late 2023 to 2024 range. It will be a full 3 rows and even [6’3″?] adults like myself can easily fit in the back row since the front row is more toward the front of the car than in SUVs. Then there’s the sedan looking thing [ID.Aero + Space Vizzion wagon] from our presentation [pictured below]:

VW also invited us to go into the factory and check out the battery assembly, where they will take cells from SK Innovation in Georgia and pack them up into a car-sized module. The final assembly happens in the adjacent massive factory complex outside of the city of Chattanooga. It is a sight to behold and the pictures that I was allowed to take (many areas were off-limits including battery assembly) don’t do it justice:

I came away from this event feeling really good about VW’s prospects in the future US EV industry. While obviously still catching up to Tesla in terms of EV output, they’re way ahead of their traditional automobile manufacturing brethren in transitioning to EVs. On the local level, our own Bradley Chambers could talk for hours about how much the “Chat plant” has brought to the surrounding area, spurring the economy by bringing great jobs and people into town.

The AWD ID.4 is exactly what I wanted hardware-wise after driving the RWD model in the snow. It is peppy, and it can go off-road and through bad weather. I should note that the actual car I was driving was built in Germany but it is identical to the one that will be produced in the US next year on an identical assembly line.

The center stack software and features like Plug and Charge/Bi-Directional charging aren’t there yet however, and it’s our job to keep VW’s nose to the grindstone until those promises are delivered. But overall, the package is great right now and at a very attractive price, especially after subsidies.

We can’t wait to spend more time with the ID.4 and those other EVs VW has in the pipeline.