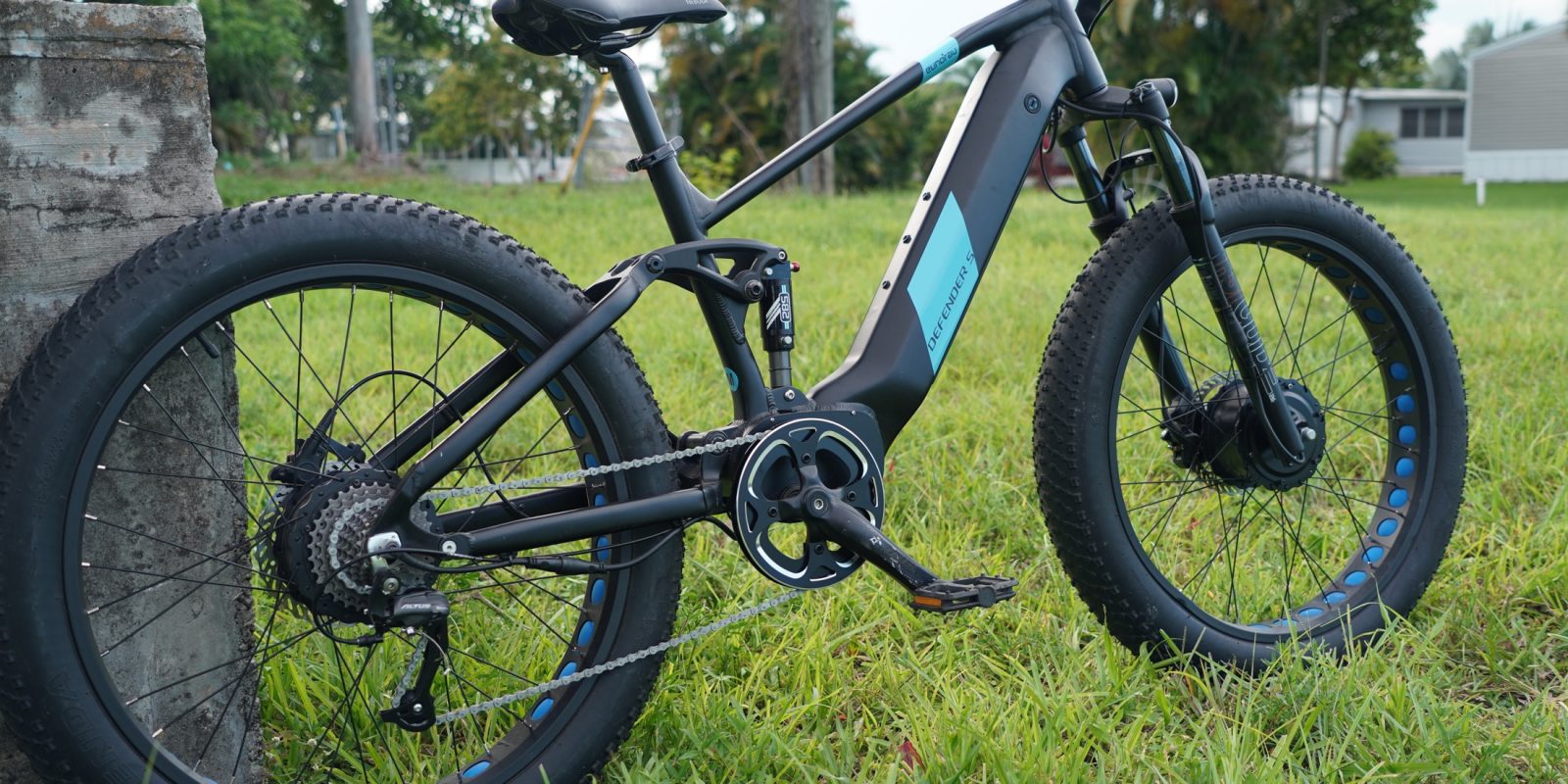 I ride e-bikes a lot. Some days it’s a lightweight road e-bike. Other days it’s a longtail cargo e-bike. And some days it’s a ridiculously overpowered full-suspension fat tire e-bike. And as you may have guessed, I’ve been having a lot of days like those lately while reviewing the EUNORAU Defender S e-bike.

Some might even say it’s too much bike. But those people don’t realize how much fun an e-bike like this can be – when used responsibly.

Check out my video below to see the EUNORAU Defender S in action, then read on for my thoughts on this epic monstrosity of an electric adventure bike.

The first thing you’ll notice about this e-bike is the power and torque.

From the moment you blip the throttle, it just rockets forward. I get front wheel burnouts even when I don’t mean to, though I’m a fairly lightweight rider.

In fact, as much fun as the crazy power is, I’d say it almost comes on too strong. Some dual motor e-bikes have a switch to allow single motor operation or to drop the power into Eco Mode. The EUNORAU Defender S has neither of these, so it’s all power all the time. In practice, the extreme power is only an issue on dead starts when it lurches you forward. Once you’re moving, the power is still palpable, but at least it’s more controllable.

I should also note that this is on throttle operation. If you use pedal assist, then the takeoff is much more gentle. It’s feels like they programmed in power ramping for the pedal assist but just left the sliders set at 100 for throttle control. You get used to it, but boy are those first few starts a doozy.

I should also briefly address responsible riding here. Heavy, powerful e-bikes like these require more consideration than light and nimble electric mountain bikes. If you’re riding mixed-use trails that allow e-bikes, don’t go flying around blind curves and into a group of hikers. I did almost all of my riding on wide-open double track and basically treated the bike like a two-wheeled Jeep for overland-style adventure riding. There’s a time and a place for everything, so ride responsibly. End rant.

Where were we? Oh right, the power. That high power is great for two things: speed and hill climbing.

The specs on the website list the top speed as 35 mph. I never saw north of 28 mph, but perhaps there’s some secret unlock code that they never shared with me. Even so, at 28 mph the tire roar is enough to give you a seriously exciting ride. I’m not sure I’d even want to take this thing up to 35 mph, though at least it’s got some decent dual-piston hydraulic disc brakes on large rotors to bring it back down to realistic speeds.

The combination of fat tires and full suspension mean that you’re riding on the bicycle equivalent of a memory foam mattress, especially when you drop the tire pressure. The ride is pretty darn cushy.

Neither of the shocks are super high-end, but they both work well and give you that confidence to roll over a 3-inch branch on the ground at full speed or hop that curb on a whim.

The only downside to such giant tires is that they aren’t quite as graceful as you’d hope. This is a tank of an e-bike, and it definitely doesn’t turn on a dime. It’s decently responsive, but “nimble” is not a word I’d use to describe it.

The bike comes in both 17-inch and 19-inch frame sizes designed to fit riders on the shorter and taller end of the range spectrum.

There are also multiple battery options available, with a single 48V 17Ah battery mounted in the downtube or a second identical capacity battery piggybacking on top.

I tested the single battery version, and while the bike had plenty of power, it didn’t last for long. This is one of those e-bikes that is here for a good time, not a long time.

Doubling the battery would not only give you more ride time, but it would also prevent voltage sag, which results in lower voltage due to the high discharge current required by two 750W motors operating from a single battery.

At full charge the bike worked well, but when I got down to 30% battery, the meter would suddenly drop to 0% when I mashed the throttle, though I could still keep riding. That’s telltale voltage sag, which is an indication that the motors are pulling more power than the single battery wants to give.

I get that the suspension adds to the price, but this still seems fairly lofty.

Even so, I can’t deny how much fun the e-bike is to ride. So if you’ve got the cash, EUNORAU has got the bike. And it’s a ton of fun, even if it’s an expensive ride to get there.