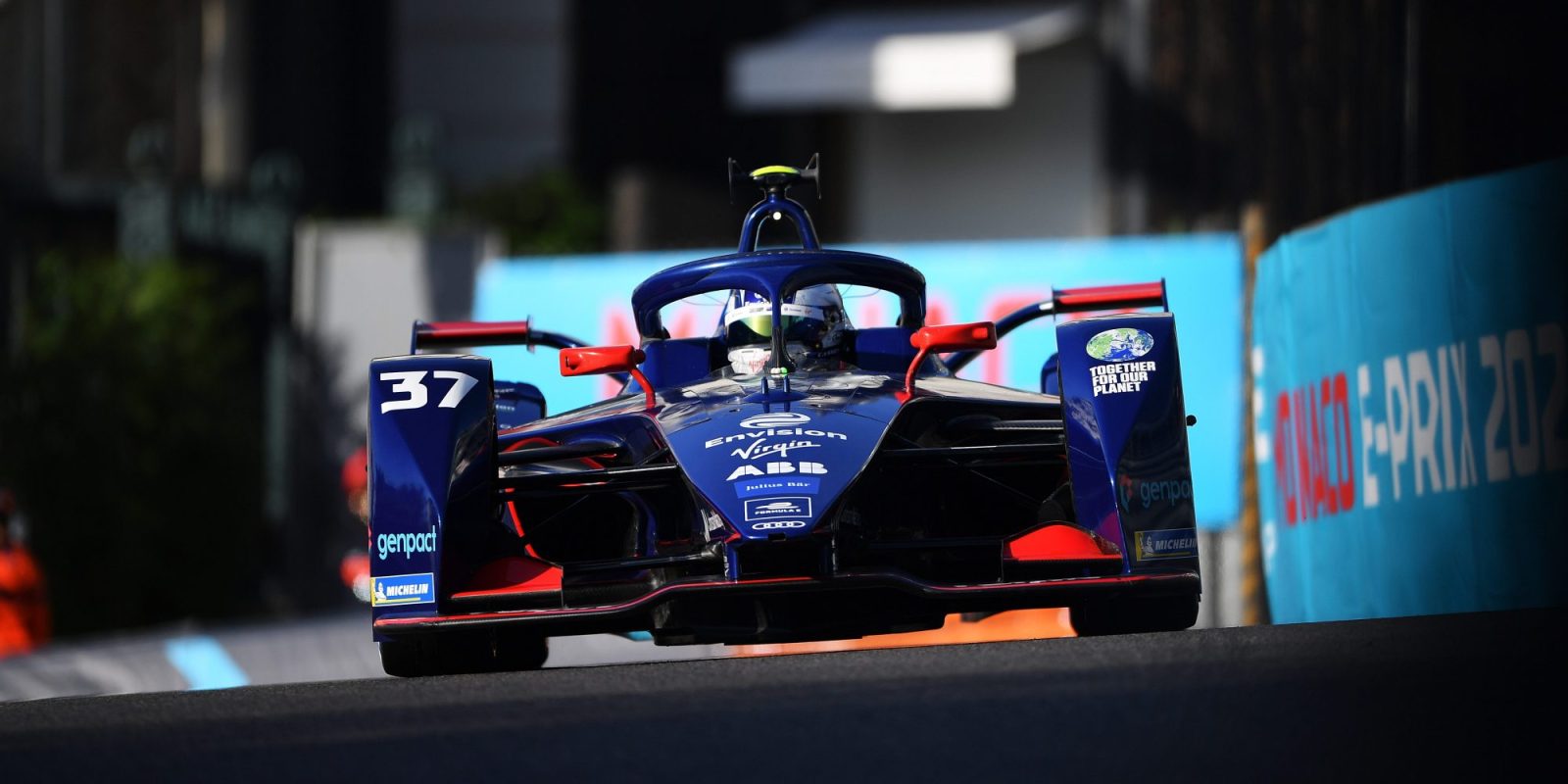 After a few weeks off, Formula E is back with a doubleheader in Mexico. This time, we’ve moved from Mexico City’s Autodromo Hermanos Rodriguez to nearby Puebla and the Autodromo Miguel E. Abed.

The race comes after a truly excellent Monaco ePrix, the first time Formula E has raced on the full historic Monaco circuit and one of the better races the track has ever produced.

We’ve also got a little Formula E news to recap, including Mercedes working on its Gen 3 car, Monaco possibly becoming a yearly race, and Formula E’s plans to introduce a junior championship.

But first, we’ll start with a recap of the excellent 2021 Monaco ePrix.

Monaco produced a race for the ages this time. While the full Monaco track is historic and glamorous, it’s not generally known for producing the most exciting racing.

In fact, at the Formula One race there just a couple weeks ago (after the Formula E race), there was virtually no on-track passing over the entirety of the 98-minute race. The track is tight and relatively low speed, and there just aren’t very many spots that offer good opportunities for passing.

However, due to Formula E’s smaller cars, less reliance on aerodynamic grip, and tighter performance disparity, this wasn’t the case with Formula E, which had plenty of action all throughout the pack for the entirety of the race. Unfortunately, Formula E no longer publishes full race broadcasts on YouTube anymore, but here are the highlights:

We started off the weekend with qualifying, where Antonio Felix da Costa earned pole with a time that was about 20 seconds slower than Formula 1 achieves on the same track. About a second of this difference could be attributed to a change in the chicane coming out of the tunnel, which was slower than the F1 version of the chicane, and a few more seconds can be blamed on Formula E’s tires, which are all-weather treaded tires rather than F1’s racing slicks.

When the race came, we had immediate action. The hairpin produced a crash immediately on the first lap, with cars going three wide into one of the tightest corners in racing. Unfortunately, this sent Alex Sims out of the race, but the action wasn’t stopped for long due to the excellent Monaco race marshals who cleared the wreck quickly.

Passes even happened in parts of the track where nobody would expect them. In F1, the exit of the tunnel is pretty much the only real passing opportunity. But Formula E saw passing coming out of the tunnel, and on the front straight, and through the swimming pool chicanes, even going up the hill towards the casino. Pretty much every corner and every straight saw some sort of action.

With 15 minutes left, Rene Rast hit the wall, forcing a safety car and bunching the pack up. This gave us the perfect conditions for an exciting finish, with cars jockeying for the win. There was an incredible fight at the front of the pack between da Costa, Frijns, and Mitch Evans, with Evans defending the lead hard for the last few laps. But eventually, da Costa managed to get past with only half a lap left, winning the race. Evans fell to third behind Frijns, who passed him on the final straight.

In the end, the podium was da Costa, Frijns, and Evans, in the same order they had qualified. Looking at the race results, most drivers finished close to where they qualified. This might make it seem like yet another boring Monaco processional, but the race was anything but.

In the end, the race had some chaos — the early hairpin crash, the safety car — but less than we’ve come to expect from Formula E. It was mostly just excellent, tight racing from start to finish. We can’t wait to come back to Monaco and see another race like this. And we might not have to wait as long next time…

So far, the Monaco ePrix has been a biennial event, occurring two weeks before the F1 Monaco Grand Prix and alternating years with the Monaco Historic Grand Prix, an enthusiast event with classic race cars. But due to COVID, none of these occurred last year, and all three occurred this year. Now that Monaco has been successful at hosting all three in the same year, The Race theorized that the Monaco ePrix could become a yearly event. It’s far from happening, but there is a compelling case there — and the Prince of Monaco is a big electric car fan anyway.

There have been other support races in the past for Formula E, most recently the Jaguar I-Pace eTrophy, which raced for one and a half seasons before folding during COVID.

The new ladder would be all-electric from bottom to top, beginning with a youth karting championship. This is more of a long-term vision, but it sounds like a great way to get people interested in electric racing from early on and continue to change Formula E’s (somewhat unearned) perception as a place Formula 1 drivers go after they leave the top series.

Finally, while Mercedes has not yet committed to Formula E’s upcoming “Gen 3” rules, which start in the 2022-2023 season, the company did recently announce that it has started exploring development of a Gen 3 powertrain. While this is not a commitment, it does show that Mercedes is at least interested. Audi and BMW have both stated that they’re pulling out of the championship at the end of this season, but most other teams have reiterated their long-term commitment to the series already.

This weekend we’re heading back to Mexico, but with a change in scenery. Formula E previously raced in Mexico City itself, but now we’re moving to a new track in Puebla.

The championship, as usual, is pretty close. By the end of this weekend, we think that there’s a good chance any of the top 7 or so drivers could end up at the top of the drivers’ championship standings, and Jaguar, DS Techeetah, and Mercedes are all within a razor-thin margin for the lead in the teams’ championship.

The Puebla track is interesting because it’s a combined oval/infield circuit with large, lightly banked exterior turns. Formula E will use a hybrid layout that consists mostly of the infield track but visits the oval for the start/finish straight and one of the two banked turns.

This will be the first time Formula E has visited an oval track and one of the few real racing circuits Formula E has raced. Most Formula E races happen on street circuits in city centers, which is one of the founding ideas of the championship. But this year, we’ve seen a real race circuit in Valencia, the full historic Monaco circuit, and now even a partial oval circuit, alongside our standard retinue of street tracks. Lots of variety in Formula E these days.

The long straight and banked turn will offer interesting energy challenges for the teams, as high-speed tracks result in much higher energy use. We saw this in Valencia where, between a new track, rain, and an unfortunately-timed safety car forcing recalculation of available energy, several teams ended the race with zero usable energy left and were thus disqualified.

We expect that teams will be warier this time around, and the first half of the race will be rather cautious as they all figure out how much energy they have left for the finish. There may be a reluctance to lead the race, as is commonly seen on oval tracks, as leading uses up much more energy than following while the lead car punches through the air, and following cars can benefit from drafting in their wake.

The Puebla track also has a different type of attack mode activation zone. Attack mode is a temporary boost in power that cars can use a limited number of times per race, but in order to activate it, they need to drive through an activation zone that is off the racing line on a specific corner. Occasionally, this leads to difficulty where a car will miss the sensors embedded in the track and not be able to activate their boost, thus losing time for no reason.

In Puebla, the activation zone is a different turn entirely – as can be seen in the graphic above under “T8.” Many have compared this to the concept of a “joker lap” from rallycross racing, where each driver gets to take a shortcut on a particular part of the track once per race. Here it’s a longcut rather than a shortcut, but the same general idea applies — each driver will have to take the joker lap twice during the race, which should mix things up nicely and keep the racing exciting. It will also help to fix the problem of the sensors occasionally not working since there’s no question whether someone missed the turn or not.

So we’re looking forward to the Puebla ePrix. Not that Formula E needs any help being exciting, but this track looks like it has a lot of variety between long high-speed sections and flowing twisty bits.

So if you haven’t started tuning in yet, this is as good a time as any. You already missed the best race yet in Monaco, so don’t make that mistake again.

There will be two races this weekend, each starting at the same time of day on Saturday and Sunday. The races start at 2 p.m. PDT/5 p.m. EDT, 9 p.m. UTC, and 4 p.m. local Puebla time. Races will be aired on CBS Sports Network in the US, or if you’re elsewhere, head over to Formula E’s website to find out how to watch the race in your country. Unfortunately, Formula E will no longer upload races to their YouTube channel, though you should be able to find highlights there sometime after the race.