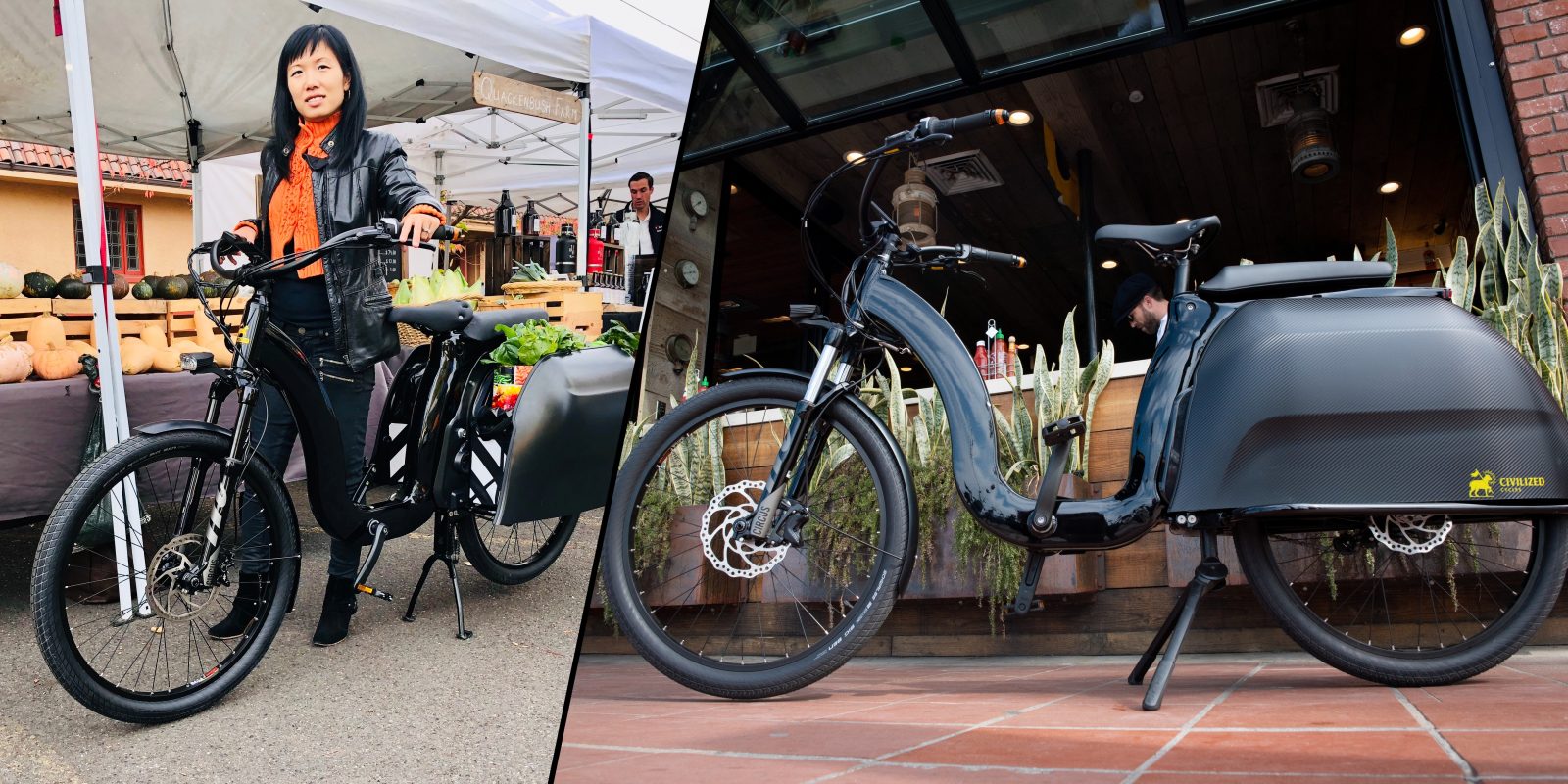 Civilized Cycles has just unveiled its new Model 1 electric bike today, and the New York-based company is already claiming that it “rivals a second car or moped.”

Judging by the specs and design, they might be right.

With that out of the way, let’s take a look at what Civilized Cycles designed into this e-bike.

The design uses full-size wheels and a laid-back, upright geometry somewhat like a cruiser bike. But it also includes a deep step-through frame more akin to a moped.

The frame is designed to carry up to two adult passengers and also includes expandable rear panniers for a large amount of storage. The company claims that riders can fit four full grocery bags in the rear of the bike – no more dangling bags from your handlebars! The bike is rated for a max capacity of 400 lb (181 kg), which may explain why they spec’d it with that beefy double kickstand and powerful 4-piston hydraulic disc brakes.

The mashup of a bike and moped design didn’t happen by accident. The Model 1 was created by Zachary Shieffelin, founder and CEO of Civilized Cycles but also the founder of Vespa Soho – the largest Vespa dealer in North America.

Zachary anticipated the type of utility needs that are often addressed by mopeds and scooters when designing the Model 1.

“We are excited to begin sales of the Model 1 and are eager to show that for local transportation, our greener future isn’t a sacrifice, it’s an upgrade. All of us have people and stuff in our lives, so our bikes are designed from the ground up to accommodate both. Form follows function, so we developed our own bespoke frame designed for two adults, drawing on elements and technologies from across the vehicle spectrum to improve safety, comfort, and sheer usefulness. Whether running errands, commuting, dropping a kid off at school or a romantic moment with your partner, the Model 1 will get you there in effortless style and comfort.”

That comfort doesn’t come only from the upright riding position, it’s also thanks to the full-suspension design of the bike. The Model 1 claims to be the first bike to offer automated self-leveling suspension. The patented system uses an on-board compressor, air spring, and sensors to adjust the suspension based on the bikes weight. If you change the load on the bike, such as removing cargo or taking on a second rider, the press of a button will reset the suspension based on the current weight distribution.

The company claims that results in the smoothest ride possible and that it is more comparable to that of a car than a bike.

A 750W mid-drive motor is paired with a 5-speed Sturmey Archer rear-wheel hub transmission, and is controlled with either pedal assist or a “Launch Control” throttle.

The on-board display offers PIN code locking that is also accessible through a remote app, and there’s an optional GPS theft-tracking device as well.

The expandable panniers are likely the most eye-catching part of the bike, after that step-through frame. They are rated to support up to 50 lb (22.6 kg) of cargo – which Civilized Cycles surely can’t say, but we all know means that you could conceivably stuff a bunch more in there. The water-resistant and lockable panniers also hold closed with a magnetic clasp when not in use and double as leg protection for the second passenger.

You might want to grab a spare battery to stuff into one of those panniers, too. With just 500 Wh of capacity, the bike seems to offer excess in everything but the battery department.

The Model 1 is available in Black, Imperial Red, and Silver. Riders can choose one of those options today now that pre-orders have just opened, but shipping isn’t likely to begin until Q4 of this year.

Oh and that $4,499 pre-order price we mentioned at the top? That’s promotional, so you might want to hop on this one quick before the MSRP of $5,499 kicks in.