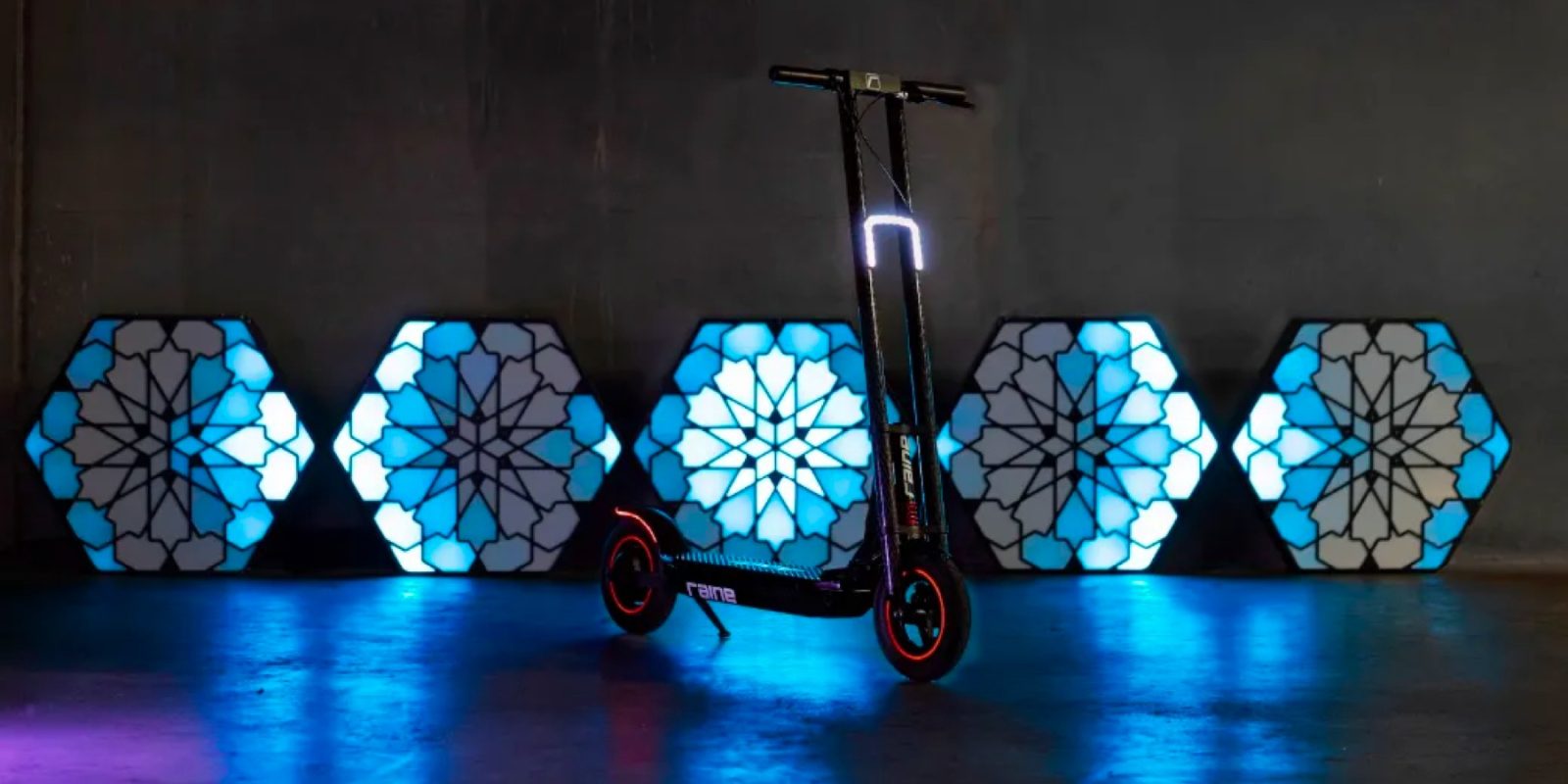 The Raine One electric scooter was supposed to be a giant leap forward for the industry, promising higher performance and a sexier design at a lower price. But after collecting hundreds of thousands of dollars in pre-orders on Kickstarter and running over a year past the original delivery date, the Enova design team behind the Raine One scooter announced today that they would be stopping development work on the scooter without issuing refunds.

Backers, as you may imagine, are not pleased.

They promised exactly what the industry had been looking for, a fast and lightweight electric scooter that was comfortable to ride and packed in the latest technology.

Weighing a mere 26 lb (12 kg) and claiming a top speed of 31 mph (50 km/h), the carbon fiber, full-suspension scooter was supposed to include features like GPS navigation, heated grips, integrated locking, and ABS braking.

It sounded too good to be true, and so I called their bluff and interviewed them for an article that ran under the title Raine electric scooter founders promise it isn’t a Kickstarter scam.

In addition to being a personal electric vehicle journalist, I also happen to be a mechanical engineer and an MBA.

So I verified the parts of the scooter and startup that seemed legit, and I called the team out for the parts that didn’t.

Ultimately I came to the conclusion that they could likely deliver, but that the scooter would only live up to some of its promised specs.

Unfortunately I was wrong on both accounts. They didn’t deliver, and the scooter didn’t live up to anything.

In the update, the team explained that they had just “received a cost increase on the weekend of several hundreds of thousands of dollars from the overseas supply chain doing our build.” They further detailed that “A significant amount of the increase is material and parts,” and that “on top of that, freight costs are trending at 2.5x the previous freight price index.”

Ultimately, the team claimed that these cost increases were now insurmountable, stating they “must hibernate and come back online when the market conditions work. We are reducing all expenses until this time has passed.”

Having received a total of $438,430 from nearly 500 backers, the Enova Design team explained that there would be no refunds because the money had all been spent. They instead said that if they ever restart the project, pre-order customers would receive their scooters:

Sadly we can’t send backer funds back – they have been used in the project, in our investment in patents, IP, stock and materials, tooling. However if and when we relaunch, we will honor the reward and provide a product then.

If or when the conditions return to deliver, we will do so. We know that our ongoing business model is successful, we plan for this to be a pause, not an end.

Now pre-order customers are understandably raging at the three founders, claiming that the sequence of events don’t add up.

Despite currently being more than a year late for deliveries, the Enova Design team behind the Raine One electric scooter had been providing regular progress updates.

Just two weeks ago, the team shared in an update that “the electrical work is ongoing and going really well. Our team is working perfectly with the factory. We are on the last PCB confirmation, have the ordered parts soon to arrive, and working through some of the BOMs (Bill of Material) to find substitute components to combat the shortages. So far all substitutes have been locked in.”

Now pre-order customers that have been left high and dry are taking them to task.

“This is really disappointing. Feel cheated.” wrote one backer. “You were constantly updating with the progress up until last week and suddenly we hear about the price increase.”

“So, for me I understood the crisis and I waited without complaint,” said another. “I paid $1,899 for 2 and that is not money I can just lose at this point.”

Some have questioned when Raine knew that they wouldn’t be able to deliver, writing, “Just gutted. The money yes, but also the loss of something I was looking forward to and the fact that only weeks ago we were told shipment was still happening this month which must have been an outright lie.”

Others have threatened legal action, writing:

I originally backed this because I am a US military member and I needed easy transportation to and from work. I chose this scooter because it was cheaper than a car and I figured I could shell out a little bit of cash. Now I’m being told I’ve been lied to the entire time? I will not stop pursuing this issue until I receive a full refund or a scooter. If it takes me contacting Kickstarter or local or foreign legal teams, I will get my money back or a scooter. This is completely unacceptable.

Enova Design, for its part, is likely protected from legal action. Kickstarter projects, like most crowdfunding campaigns, aren’t storefronts. Backers are warned, whether they realize it or not, that they are actually supporting a project and not actually buying a product. In exchange for their support, they receive “rewards,” usually in the form of the product being developed. It’s a de facto pre-order, but not a legally binding one.

Of course the company still claims that it hopes to deliver the scooters one day, if market conditions ever allow them to do so.

Unfortunately that isn’t much solace for the hundreds of backers who are out their money and have no scooter to show for it.

I feel awful for the backers here. There are plenty of Kickstarters that have suffered through COVID-related supply chain and shipping disruptions and have figured out how to make it work. Unfortunately for these backers, the company they chose wasn’t one of them.

I think it’s important to be clear, though, that not all Kickstarter or Indiegogo campaigns end this way – and in fact, the vast majority deliver on their promises.

There are major companies in the electric micromobility space that got their start through crowdfunding. ONYX Motorbikes went from an unheard-of startup to selling millions of dollars of electric mopeds per month, thanks to its Indiegogo campaign. The largest electric bicycle company in the US, Rad Power Bikes, began selling its best-selling model RadRover as an Indiegogo campaign. And SONDORS, perhaps the biggest out-of-nowhere e-bike company ever, saw its meteoric rise to low-cost stardom, thanks to its record-breaking Kickstarter campaign.

In fact, I am currently a backer of an electric motorcycle Indiegogo campaign that has just now overrun its estimated delivery date but is providing such detailed and numerous updates on progress that I’m not the least bit worried.

But despite the huge successes, crowdfunding is no stranger to failures, either. Very few failed projects are outright scams, and most are unfortunate cases of unprepared entrepreneurs getting in over their heads. That was likely the case with Enova Design’s Raine One electric scooter project.

And that also raises ethics questions, not only for backers or project runners, but also for journalists covering these projects. Crowdfunding campaigns are one of the most popular ways to launch new electric bicycles and I cover them often. Hell, SONDORS just used a similar method to pre-sell actual motorcycles. As a journalist, it can be hard to determine in advance what is a legit product and what is unlikely to succeed. For that reason, I have a simple rule for projects I cover on Electrek. I’ll only cover a crowdfunding launch under one of two circumstances: either the company has a track record of successfully delivering products, or I’m provided with the chance to physically test the product in advance.

In the case of the Raine One scooter, I made an exception on the grounds that I was interviewing the founders to determine if they were peddling snake oil or not. While at the time I did my best to point out the areas where I felt the founders were coming up short, I didn’t expect that I’d be writing this article a year and a half later.

And yet here we are.

[Note: We reached out to the Raine One team for comment but have not heard back by the time of publishing.]