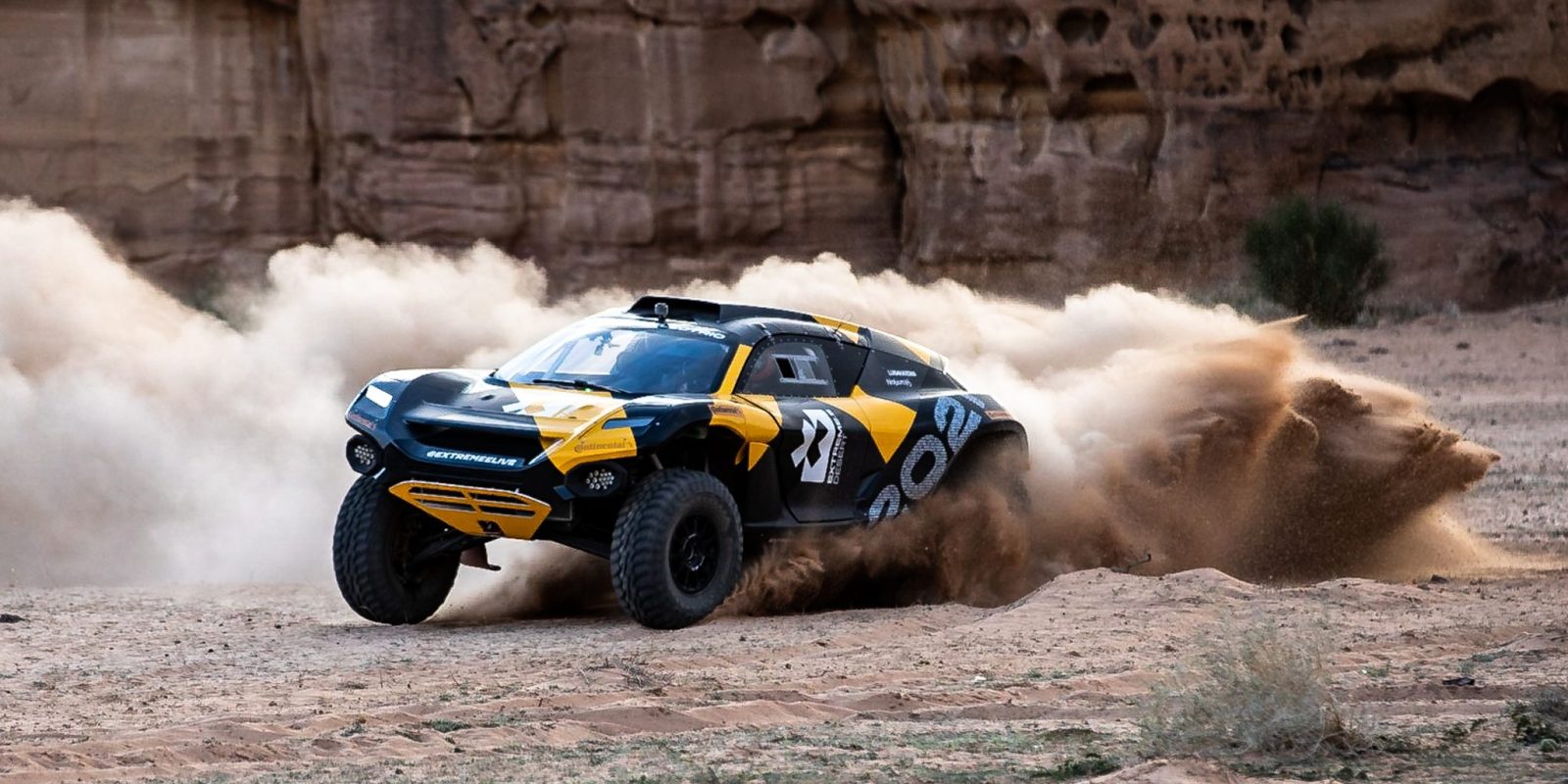 Extreme E, the new electric off-road racing series, begins this weekend with its inaugural race, the Desert X Prix, in the deserts of Al-‘Ula, Saudi Arabia.

The race itself happens on Sunday at 10 a.m. – 12 p.m. UTC (3 a.m. PDT, 6 a.m. EDT, 1 p.m. local Saudi time) and will be streamed to some but not all territories. You can find out how to watch it on Extreme E’s website. In the USA, Fox Sports 1 will carry the final race delayed at 3 p.m. PDT/6 p.m. EDT on Sunday (listings subject to change, check the schedule for timing of other sessions). Other race events, like shakedown and qualifying rounds, will also be streamed on Extreme E’s social media.

Extreme E was founded by Formula E CEO Alejandro Agag on the idea of bringing electric racing to a variety of remote and environmentally fragile locations to raise awareness of climate change.

There will be five races this season, each set against a different environmental background – Desert, Ocean, Arctic, Amazon, and Glacier. Each race is intended to highlight the effects of climate change on their respective environment and how electric transportation can reduce humankind’s carbon footprint.

The first race, in the desert, has an obvious focus – desertification. As global temperatures rise due to climate change, many regions will see more drought and deforestation. Extreme E cites projections that show that if climate change continues unchecked, billions of people will be exposed to periods of water scarcity and up to hundreds of millions will be displaced, increasing climate refugeeism.

Races will also benefit local conservational causes, with this race supporting endangered sea turtle conservation efforts in the Red Sea in association with the Ba’a Foundation.

Extreme E is a “spec series,” which means all teams will race in the same “Odyssey 21” racecar provided by Spark Racing Technology, the same company that builds Formula E’s chassis (along with Dallara). The battery is built by Williams Advanced Engineering, which provided the batteries for the Gen 1 Formula E car.

It will need all the grip it can find on the Al-‘Ula track, since the 18 km track looks like it’s not much more than deep, soft sand dunes and narrow passageways through rocky canyons. Here’s the first footage of the track from today’s shakedown session in advance of the race (driving starts about 11 minutes in):

We don’t know how big the Odyssey 21’s battery is, but this wouldn’t really give us many realistic comparisons anyway – driving through deep sand is not a typical use case in the EPA’s mileage testing regimen.

Since the races happen in such remote locales, energy needs to be brought in somehow. Extreme E plans to transport the energy required for these races via hydrogen fuel cell charged with solar. Solar power will be used to split water into hydrogen through electrolysis, that hydrogen will be stored and brought to the race location, and then a fuel cell will be used to charge the batteries on the Odyssey 21 cars between race sessions.

Qualifying will consist of two runs of two laps around the track in time trial format, with one lap being driven by each driver. The six out of nine teams with the best times will go on to race wheel-to-wheel in two semi final races of three teams each, and then the top teams in those races will compete in the finals. Perhaps a little confusing race format, and we hope it will make more sense once we see it happen.

Teams are lined up with two drivers each, and in a first in motorsport, all driver pairings are gender equal – with one male and one female driver. Here are the driver lineups:

Many big names are on the list, including rally legends Sebastien Loeb and Carlos Sainz, two of the most successful drivers in the history of rally racing. Loeb has won more World Rally Championships – nine in a row – than any other driver, and Sainz previously held the record for the longest WRC career with 196 races under his belt.

The female driving talent includes Sara Price, who has won 17 national motocross championships; Molly Taylor, the first woman and youngest driver ever to win the Australia Rally Championship; Christina Giampaoli Zonca, a member of the first all-female WRC team; and Laia Sanz and Christina Gutierrez, who have both competed in the famously grueling Dakar Rally.

Extreme E has all the ingredients it needs to be a wild time. Off-road racing in a crazy high-performance electric car, with some of the best drivers in the history of the sport, in extreme locales and with a race format that’s guaranteed to cause at least a little confusion? It should make for great television.

Before Formula E, the electric open-wheel road racing series, started, many in the motorsport community were unsure if it would be all that fun to watch a race without the traditional roar of high-performance engines, and with a lineup consisting of many retired F1 drivers, and goofy stunts like swapping cars mid-race (which no longer happens) and letting drivers get a boost of power for winning a Twitter vote (which still happens, but the boost is almost irrelevant in the new rules).

Then the first race came around and featured incredibly close racing, lots of passes, and, to top it all off, a spectacular last turn crash as Nico Prost, who had held the lead for the entire race, sideswiped Nick Heidfeld while he was attempting to take the lead, sending Heidfeld aloft and into the barriers (he was uninjured).

A lot of electric racing fans were made that day, as the event and series received positive reviews from most viewers, even those who had entered with skepticism. Fast-forward to now and Formula E has continued to have exciting close racing all along.

So if Agag’s other series is any indication, Extreme E’s first race should be a must-watch. Tune in this weekend and have a look-see.

The Desert X Prix happens on Sunday at 10 a.m. – 12 p.m. UTC (3 a.m. PDT, 6 a.m. EDT, 1 p.m. local Saudi time) and will be streamed to some but not all territories. You can find out how to watch it on Extreme E’s website. In the USA, Fox Sports 1 will carry the final race delayed at 3 p.m. PDT/6 p.m. EDT on Sunday (listings subject to change, check the schedule for timing of other sessions). Other race events, like shakedown and qualifying rounds, will also be streamed on Extreme E’s social media.