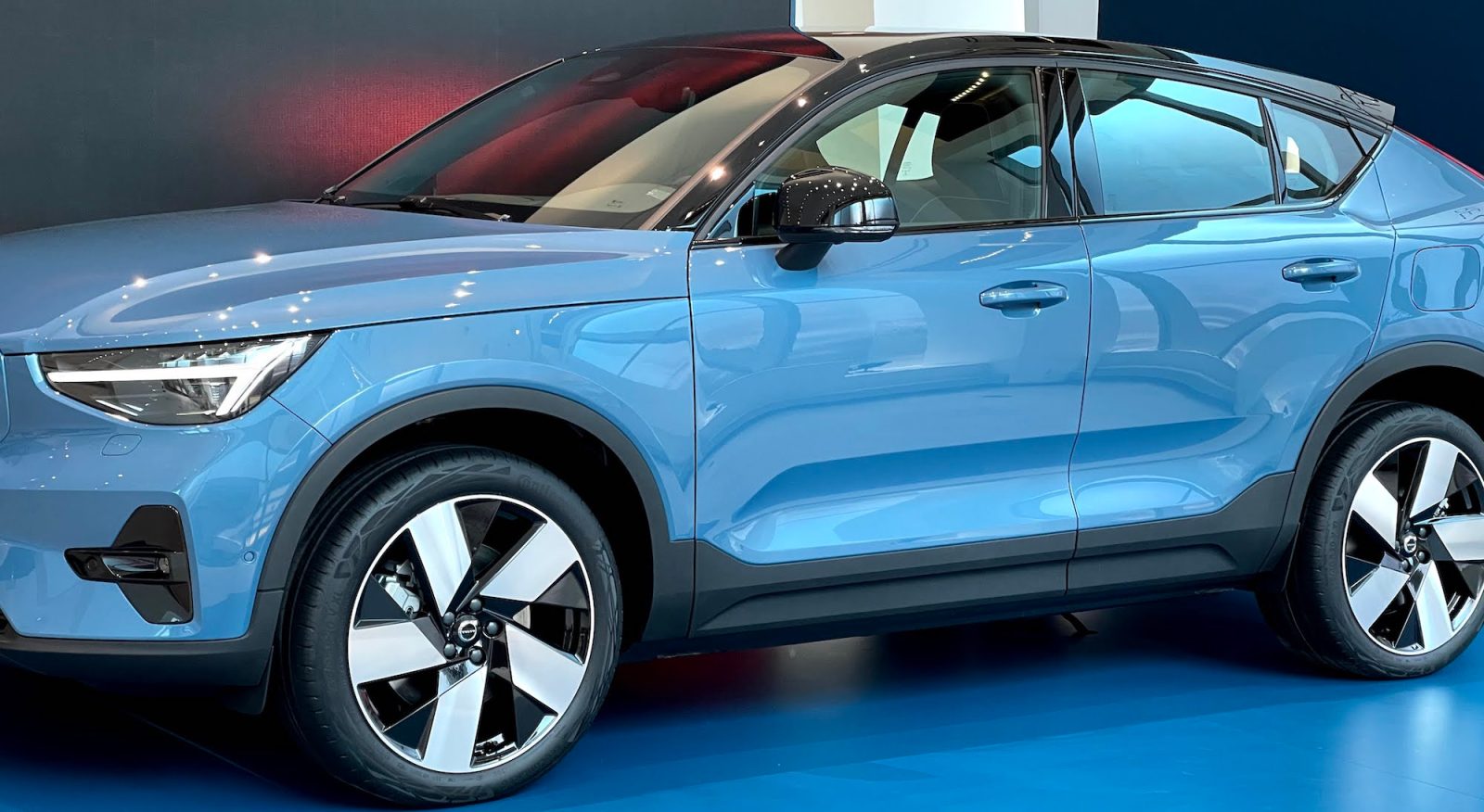 We got a limited look at the Volvo C40 Recharge today at the Volvo Cars Manhattan showroom. That’s where the single US C40 currently is residing before its trip to Boston this weekend. Here are our first thoughts.

As a background, the C40 is a 3-inch-shorter version of the already-announced and on-the-road XC40. Those inches are all chopped off above the door-window line, and it creates a nice sloping curve that gives the vehicle a slightly more hatchback coupe look than the wagon/CUV feel of the XC40. Under the doorline, the two cars are almost identical.

Volvo announced the shorter C40 Recharge earlier this month and expects to ship them to customers via online ordering only at the start of 2022. Remember, Volvo hopes to have half of its cars electrified by 2025 and be 100% BEV by 2030.

We were given access to the inside of the car and a look around, but we weren’t allowed to drive it just yet.

The C40 not only shares the bottom two-thirds of the CX40, but it also shares that same 75kWh 400 horsepower AWD powertrain. Volvo says it will get a noticeably better range than the XC40’s current 210 miles due to the lower height, lighter weight, and some software updates that could shrink the size of the buffer. You can imagine it would be slightly quicker, too, with a lighter, more aerodynamic body.

One big difference in the interior is that the C40 is Volvo’s first completely vegan interior with a lot of the carpet being made from recycled bottles. That didn’t diminish the premium feel of the interior, from the white stitching on the vegan leather to the premium plastics used throughout.

The big difference with the C40 is height for rear passengers. I’m about 6 feet tall, and I had no problem sitting in the back, and with the glass ceiling, it felt very open.

The interior is very roomy but has a hump in the middle not for an axle or exhaust but apparently for a battery. The flip side is that Volvo dug out some extra legroom from the skateboard pack, so that’s the tradeoff.

This is also an Android for Cars vehicle like its siblings, and I think one of the best in car center stack experiences out there. Like Tesla, if you map out of range of the batteries, Google Maps will give you charging station options in between from the fastest trip on down.

The rest of the app store is still being filled out, but staples like Spotify, NPR, and a few others are already there. The rest of the OS has been filled out a bit since our last look, and together with the Google Assistant, provide a very usable and robust system for navigating the OS. Below the screen are some tactile knobs and buttons that give great control over music while driving.

The frunk is the same or very similar to the XC40, which is to say fairly large, but not deep enough to store grocery bags. Underneath are a tire repair and inflation kit. Since the XC40 shares the chassis with its ICE step-cousin and the C40 is built only for EVs, there are some optimizations to be expected.

The rear is smaller than the XC40, and one of the few areas I found a little lacking. If your dog goes on trips back there and weighs over 40 pounds, I’m going to say get the XC40. Otherwise, it’s a good size with some more room under the false floor.

I really like the C40, and the XC40 for that matter. They feel great inside like you would expect from a Volvo, and along with the Jaguar I Pace, are about the only off-road-capable EVs currently on the market.

However, there’s no getting past that unusually low 210-mile EPA range on the XC40, and theoretically not much better on the C40. Tesla’s Model Y gets over 300 miles of range from the same-sized battery and a 100-mile difference is going to be hard to compensate for. Sure, the Volvo has much bigger wheels and a significant ground clearance, to justify some of that loss. Hopefully with the software update, Volvo can eke out close to 250 miles and be more competitive there.

We’ve also driven this powertrain with the Polestar 2 (233 miles of range) and thought it was a great experience.

We’d love to take these two cars off-road since that’s really a standout feature here. As for Volvo, I’d love to see some drivetrain optimizations that can get this thing above 250 miles of range, and I think they’d have a real competitor here.

Price? TBD, but if you add a few thousand to the XC40 for upgrades like the glass roof, I think you are in the right ballpark.

Compare the Volvo XC40 with the C40 side by side to note the bigger differences: