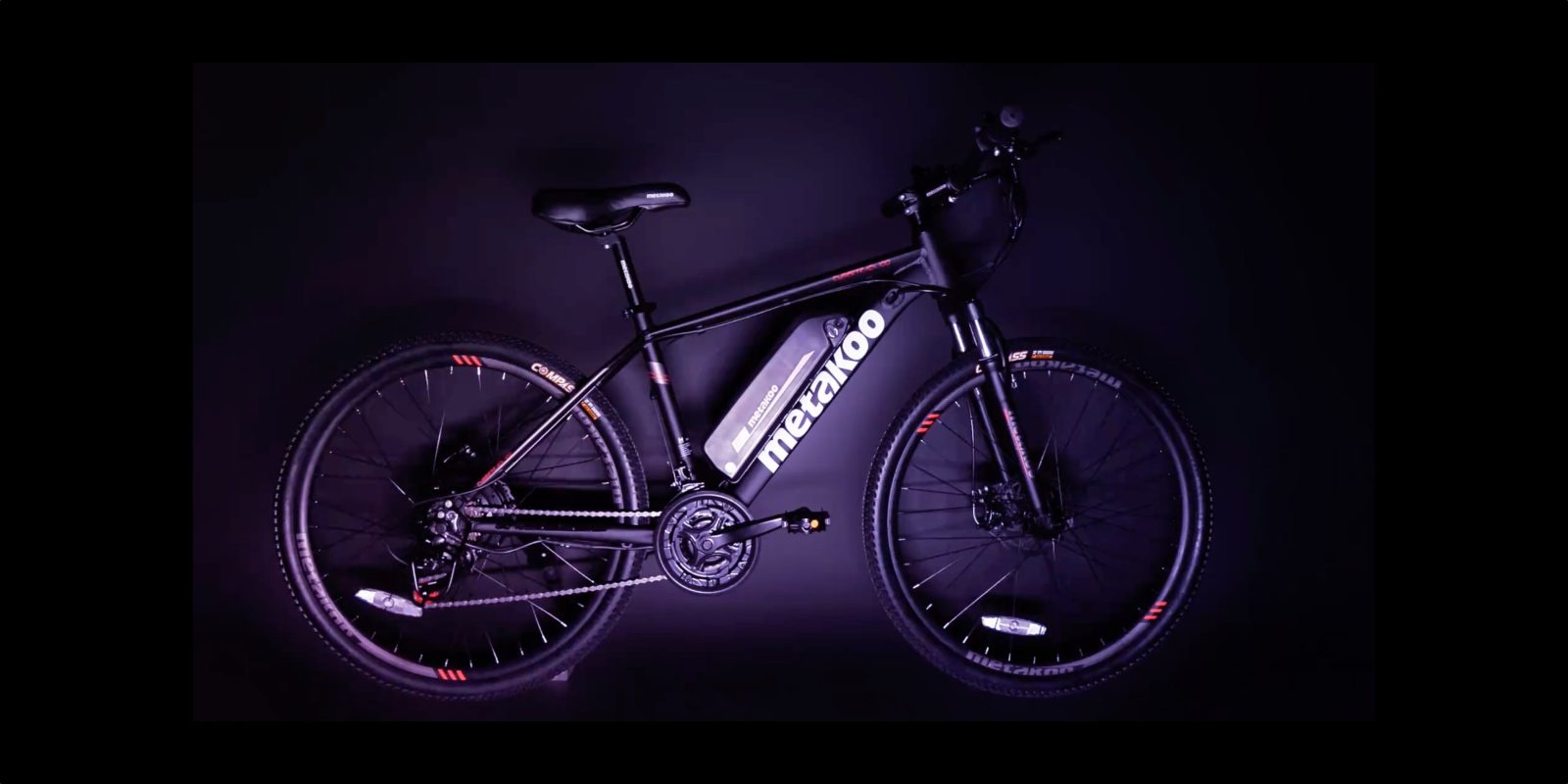 Macwheel is a relative newcomer to the US e-bike market but that hasn’t stopped the company from preparing to launch its second brand of ultra affordable electric bicycles, Metakoo. The first e-bike in the model line, known as the Cybertrack, just happens to share 90% of its name with one of the most anticipated electric vehicles in the world.

I reviewed that bike, as well a more mountain bike-style followup, and found both to be surprisingly good for the price.

They were obviously still entry-level e-bikes with bottom-tier components, but they were a stark improvement over the previous waves of budget e-bikes we’ve seen.

Now Macwheel is upping the ante with a second brand known as Metakoo. The brand’s first e-bike model, which is expected to begin sales later this month, is known as the Cybertrack 100.

The 46 lb (21 kg) e-bike uses a typical aluminum urban mountain bike frame with a downtube-mounted battery. The rather low-capacity 375 Wh battery is rated for a maximum range of 40 miles (64 km) with pedal assist or 20 miles (32 km) with throttle-only operation. Both of those numbers sound a bit high, but with an expected $699 retail price, I’m inclined to forgive a somewhat lower range.

E-bikes like these are designed more to democratize e-biking than for providing high performance. Riders generally trade off higher range and power (among other sacrifices) for lower retail prices.

While most e-bikes of this level are paired with 2A chargers, the Cybertrack 100 will come with a higher power 4A charger that is expected to charge the battery in just 2-3 hours.

A small LCD display graces the handlebars, where riders will also find a half twist throttle, 7-speed Shimano shifter controlling a Shimano Tourney derailleur and mechanical brake levers for the Repute disc brakes.

It is unclear who supplies the wheels or suspension fork as they are both branded “Metakoo”.

A Macwheel representative informs us that the first shipments of Cybertrack 100 e-bikes for the US market has just reached US shores and is en route to the company’s local warehouse. Sales are expecting to begin sometime between March 13-17.

The direct price from Metakoo will be $699. [Update: the promotional sale is over and the price is now $799, though that’s still a pretty awesome price.]

The company also supplied an unveiling video for the e-bike, which you can see below.

It is unclear yet if Metakoo will have any sort of US-based service and support outside of a shipping warehouse.

While budget e-bikes like these can help new riders enter the e-bike world at lower prices than ever before, one area these companies often fall behind in is customer support. That’s an area that several US e-bike companies have invested heavily in over the past year.

Some Asian e-bike companies are beginning to improve in this area as well. Eunorau, a company we recently covered, has set up its own headquarters in Las Vegas as a way to better serve the US market. But unless Metakoo plans to operate a team on the ground in the US, their main advantage will still likely be limited to shorter shipping times than direct-from-Asia companies.

As far as cheap online e-bikes go, the Metakoo’s Cybertrack 100 seems like a pretty decent start. For $699, getting a genuine Bafang motor and 4A charger are nice features to see.

The 36V 10.4Ah battery is disappointingly low capacity, but of course this is not a performance machine either.

I wouldn’t begin to compare the quality of the bike to more established e-bike companies. But having tested previous Macwheel e-bikes, I would definitely say that they are a great start for someone who only has a budget of $700. While I’d love to see someone on an e-bike that costs twice as much and offers bigger batteries, higher power and nicer components, of course not everyone can afford that luxury. So it is great to see more entries in the ultra-budget end of the market that still seem to offer good value.

I hate to say “I told you so” when it comes to these new Asian brands popping up this year, but I definitely called this in January. I’d expect to see this trend continue throughout the year.

Oh, and the “Cybertrack” name is hilarious. I have to give them props for doing the absolute minimum amount necessary to avoid copyright infringement. That letter “a” is doing some seriously heavy lifting.