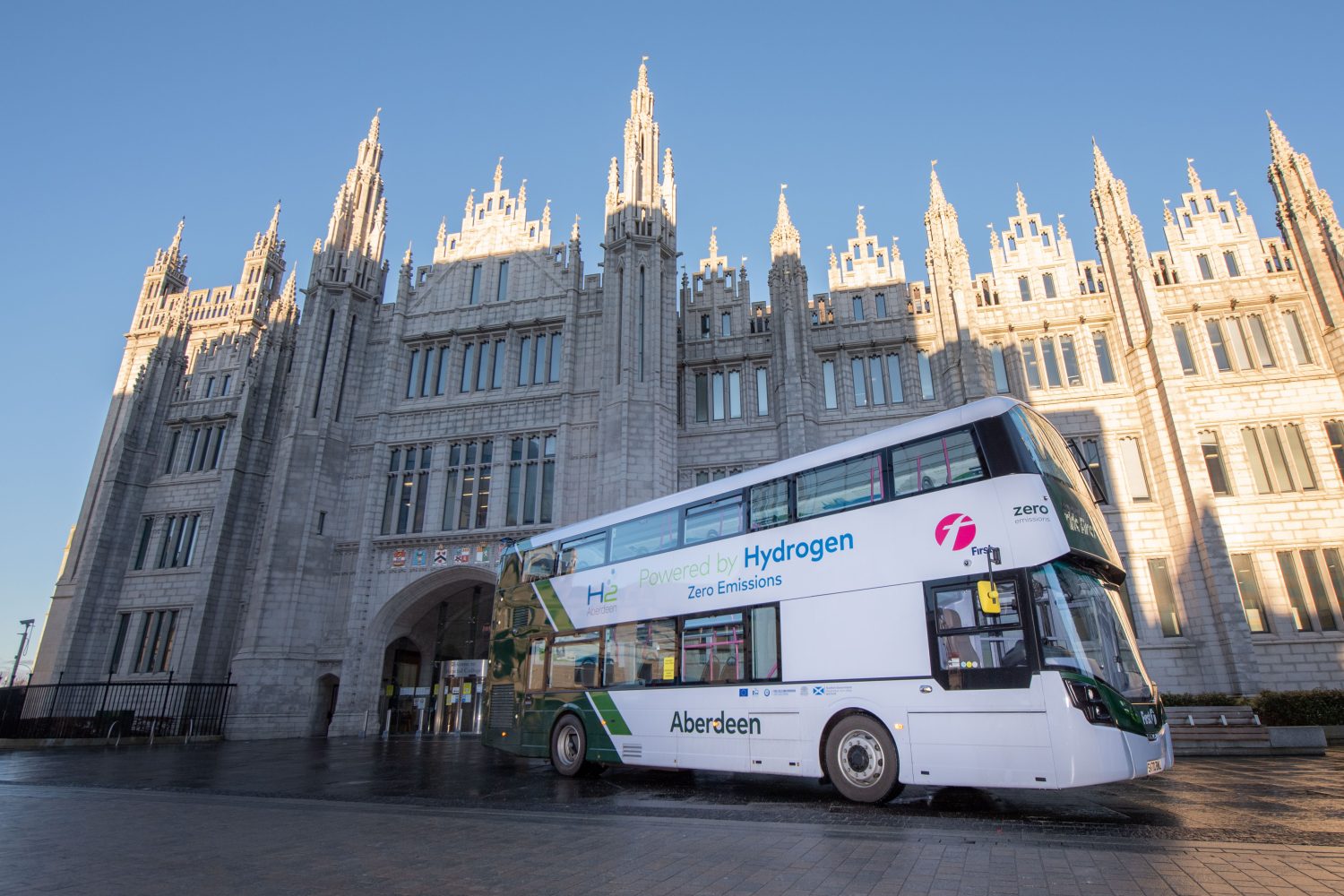 Wrightbus in Northern Ireland built the buses. They are more efficient than their electric equivalents, with refueling 25 kg of hydrogen taking less than 10 minutes and offering a greater range of 250 miles, similar to that of diesel buses. If further daily range is required then additional hydrogen tanks can be installed.

Hydrogen buses emit only water and create no noise pollution. The UK’s first hydrogen production and bus refueling station was opened in Aberdeen in 2015. Aberdeen City Council does not state whether these buses are currently running on green hydrogen or not, but it says it has plans to make its own hydrogen. Wrightbus explains the logistics of fueling them:

In the short term a gas tanker truck would be required to deliver the hydrogen to the bus garage but longer term the hydrogen could be delivered via the existing mains gas pipelines. This means that FCEV buses can be suitable for both inner city bus garages where there is insufficient electricity grid capacity and very rural bus garages where there is no suitable electricity grid. The only tailpipe emission from a FCEV bus is water vapor.

The £8.3 million ($11.37 million) project has been funded by Aberdeen City Council, European Union Fuel Cells and Hydrogen Joint Undertaking, and the Scottish Government with an investment of about £500,000 ($684.4K) per vehicle. The city already owns hydrogen and electric vans, road sweepers, and cars through a car share scheme.

Aberdeen is keen to distance itself from the North Sea oil industry and become known as the “Energy Capital of Europe” rather than “Oil Capital of Europe.” Thus the city is showing initiative in the development of new energy sources, and movement from oil into green energy and other industries is underway as part of its Net Zero Vision plan, which it agreed to in May 2020.

London and Birmingham are expected to follow Aberdeen’s footsteps with hydrogen buses.

The biggest solar IPO ever

Shoals, which moved into solar in the mid-2000s from auto parts, makes and combines the function of cable assemblies, combiner boxes, external fuses, and re-combiners. The balance of system products carries the electric current generated by solar panels to the power grid. The company has three facilities, two in Tennessee and one in Muscle Shoals, Alabama.

The company plans to grow its business internationally and break into the electric vehicle chargers market.

The company last year generated about $33 million in net income on sales of about $175 million. Those numbers were up about 32% and 21%, respectively, from 2019.

The 700-employee company estimates at least one of its parts were installed in more than half of the new solar capacity installed across the country in the year ended Sept. 30 and it had $157 million in backlog and awarded orders on its books at the end of 2020.

It’s no accident that Shoals had such a successful IPO; solar stocks have rallied since the election of US President Joe Biden, who announced his climate change and energy plans yesterday and initial plans for green energy jobs growth.