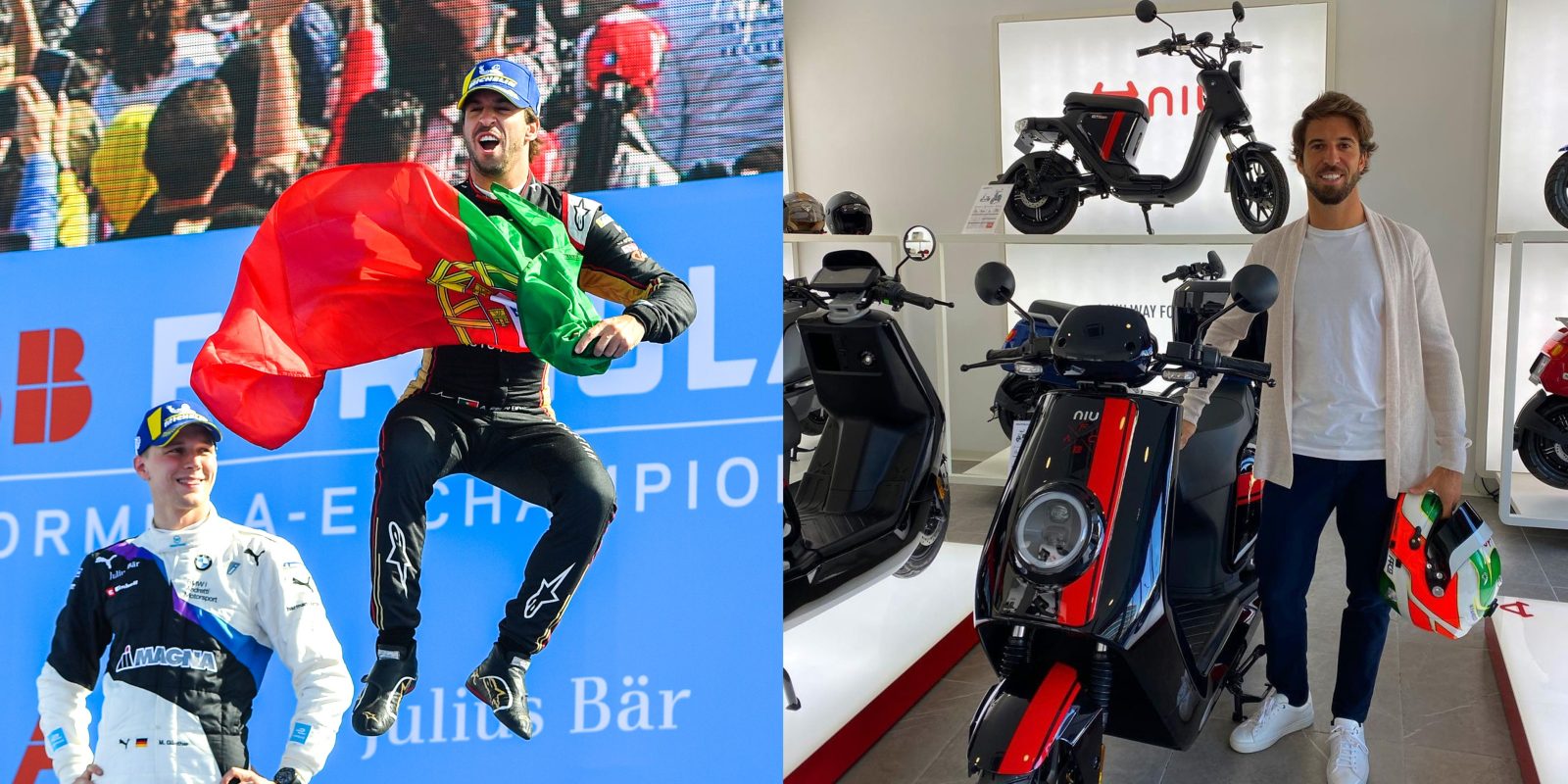 Portugual-born 29-year-old Antonio Felix da Costa is currently the reigning champion of the ABB FIA Formula E World Championship. Antonio has been with the open-wheeled electric racing league since its inaugural season in 2014.

While we wait in anticipation of the 2020-21 season beginning next month, and on the heels of Antonio and electric scooter-manufacturer NIU announcing a new partnership, we got a chance to hear a bit more straight from Antonio.

Antonio has quite the eclectic racing career that has spanned karting, Formula Renault, DTM, Formula Three and ultimately Formula E.

As Antonio explained, he has followed his racing passion for most of life:

“It has been a long journey with ups and downs. I am lucky to have a strong group of people behind me which never let me walk alone. In 2014 I had my F1 seat signed and it was hard to lose from one second to another. I had to get my head up and I kept working hard to get to where I am now. It was never easy but this is what makes the sport so interesting. Never give up!

I consider myself really lucky to have driven almost every racing car in the world in my career. I really appreciate the team work and spirit in this sport and I always try to make the best of everything. I enjoy every day at work and for me I do it for the love of it more than anything.”

After six grueling seasons of racing in Formula E, Antonio was crowned champion of the 2019-20 season, racing for team DS Techeetah.

Discussing some of the sacrifices it took to reach that level, Antonio expanded:

I always worked hard to reach this title and the last couple of years were not easy. I had to sacrifice a lot in some areas to get to a position of being in a top team. Sometimes it was not easy to be fighting for the last positions of the grid but I knew that if I did a good job my opportunity would come.

It was very emotional for me to win the title and also very good to share with my team and all the Portuguese fans this amazing achievement.

The 2019-20 season was particularly difficult due to the effect of lockdowns related to the COVID-19 pandemic.

Antonio explained how the Berlin race in particular was one of the key moments that helped lead to victory:

“I think all races were very competitive and all my wins were equally as different, but for sure Berlin was key to get the title. After 5 months in full lockdown I did everything that I could to get ready for the final battle. I knew that the first few races in Berlin were crucial.”

Throughout the interview, it was easy to see how much pride Antonio took not only in his own victory, but also in Formula E as well.

The series represents the future of electric racing, something Antonio is very clear about.

“The fact that we are racing in the heart of the most iconic cities of the world is amazing. Also the fact that we race in 0 pollution is definitely something special to know that we are part of this new era and we are generating a better world for the future generations. In a couple of years people will watch Formula E and will remember my name as one of the ambassadors of this new electric championship.”

Antonio also explained how he enjoyed the interesting new connection and interaction that Formula E has created with its fans.

The FanBoost feature that grants popular drivers an additional energy boost has proved controversial, even with Electrek’s own Jameson Dow.

But Antonio is certainly a fan of FanBoost after benefiting from it heavily last season.

“Fanboost is basically a competition where people can take part and vote for their favorite driver. In the end the top 5 most voted drivers will be awarded an extra boost during the race. This makes a massive interaction between the fans and the drivers and it was very special to win the FanBoost in every single race last season.”

When Antonio isn’t racing around tight, twisty tracks at 200 km/h (125 mph), he can be found enjoying life at a slower pace.

Surfing in his hometown of Cascais, Portugal, and spending time with his family is an important part of maintaining his mental and emotional balance. He spends time doing both as a way to mentally recharge before races.

And when it comes to personal transportation, you might not be surprised to hear that the reigning electric racing champion also uses an electric vehicle at home. But what might be more surprising is just which vehicle: a NIU NGT electric scooter.

Antonio explained how he came into the new partnership with NIU:

“When I first took my driving license I was quite competitive on the road but I realized that’s not the way to go after a few months. I am really just a normal driver on the road trying to respect people and always put safety as my number 1 rule.

Being a NIU owner now and driving a smart electric scooter by joining the #niucrew is the best way to kick off this 2021 year. I can now drive to the beach on my NIU and also drive around Cascais on my new scooter.

The best part of it is that I am doing something that I love in my city and at the same time doing my part to turn the world into a better place. I am really excited about launching a partnership with NIU especially because me and NIU share exactly the same ideas and mentality.”

As an owner of the same electric scooter (seen below), I agree with Antonio about how nice it is to ride my NIU to the beach and around my city.

Antonio finished off the interview with a discussion of how the Formula E racing series could impact the future of urban mobility, and what he sees for his own future in Formula E.

“I think we are definitely taking an important role on the future of urban mobility and the fact that we race in city centers is obviously giving people the right example on that. I also feel that a lot of aspects that we develop on our Formula E car are used on the DS road cars and this is giving me a lot of pleasure to see how fast electric mobility is growing in the last few years.

I can’t wait to kick off the new season. I want to defend my title and fight for another one. I am sure it won’t be easy as the competition is always very strong but we will work hard to get it. To my fans I can promise full dedication and commitment to fight for the world title and I hope I can count with their constant support to fight for it.”

We wish Antonio success in the 2020-21 season, which kicks off February 26 on the Riyadh Street Circuit. Boa sorte!

Make sure to tune in this season and see if Antonio can become the second ever back-to-back Formula E champion.