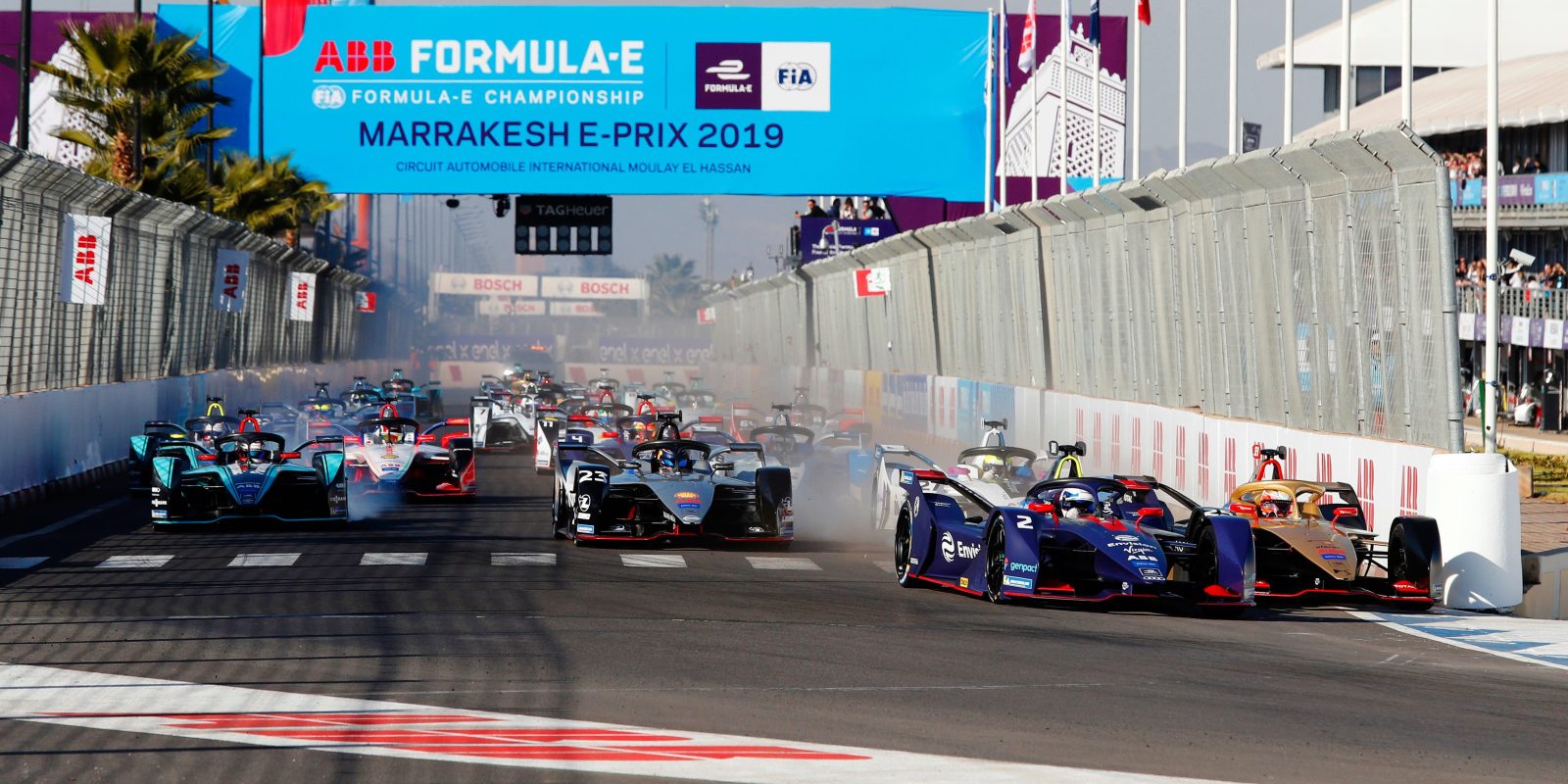 Before we start talking about the last race, I’d encourage any who are interested to watch the full race over on Formula E’s YouTube channel.  It seems to be available for free in (all?) regions. Consensus is that it was an exceptionally good race, one of the best Formula E has produced yet.

The 2019 Marrakesh ePrix took place on a dusty track in Morocco, which created exciting and chaotic racing conditions.  Many cars saw significant difficulty keeping traction in both qualifying and the race.

From the very start, this race was packed with excitement.  At the first turn, 2nd place Jean-Eric Vergne, last year’s champion, attempted a poorly-considered pass on leader Sam Bird and spun himself out, forcing him to spend the rest of the race fighting through the pack.  New driver Pascal Wehrlein, in his first race in Formula E, qualified well in 7th but was also taken out at the first turn by a rather impolite bump in the rear from Lucas DiGrassi.

The entire race featured exciting racing and passing, though for most of the contest it seemed clear that BMW would win.  Both of their drivers – Antonio Felix da Costa and Alexander Sims – made their way to the front early and were several seconds ahead of the rest of the pack with a lead which seemed insurmountable.  But just 5 laps from the end of the race, Sims went for a pass against his teammate da Costa, both drivers braked extremely late and locked up their tires, sending da Costa careening into the barriers and out of the race and causing Sims to go off-track and lose three positions.

This promoted longtime Formula E and ex-F1 driver Jerome d’Ambrosio to the lead of the race, and the safety car was sent out.  It looked as if the race might end under safety car, an anti-climactic way to end an exciting race, but the safety car left the track just in time to leave us 1 more lap of racing before the checkered flag was waved.

In the end, Jerome d’Ambrosio, who qualified all the way back in 10th place, managed to hold onto the lead, winning by .147 seconds over Robin Frijns.  This marked his third win in Formula E, but notably it was his first where he actually got to stand atop the podium – both of his other wins came as a result of post-race technical disqualifications of the race winner (and in both cases, the disqualified driver was Di Grassi).  It was also d’Ambrosio’s first time standing atop the podium in any race series since his last win in 2010 in GP2.

See last race’s highlights in the YouTube link at the end of this post, or head on over to Formula E’s YouTube channel for the full race, if I’ve managed to pique your interest.

The most important insight gleaned from the last race, other than BMW’s possible dominance to come, was in the usage of the new “attack mode.”  Each driver is given two activations, allowing them to use 10% more engine power for 4 minutes each.  These can be used any time during the race but both must be used (the specific configuration and number of activations will change from race to race).

In this race, we saw a lot of attack mode passing, and the teams seemed to have a clearer idea of when to use this mode.  Most drivers used one activation at some point in the mid-late section of the race when they were in an important battle, but saved their other usage for the very end of the race.  At any given point in time after about the midpoint of the race, about half the field was in “attack mode” at the same time, offering lots of opportunities for position changes.

This new strategy resulted in a steady ramping up of the action as the laps passed by.  This is the opposite of how racing often works, with cars jockeying for position at the beginning and then “settling in” to their positions with comparatively less action happening in the middle and end of the race.

So attack mode looks even more promising than it did after the inaugural race of the season.  Most viewers seemed quite positive on the system after seeing it work well and add excitement in Marrakesh.  It’s certainly better than the oft-rightly-maligned FanBoost system, where drivers can gain a short burst of power based on who gets the most internet votes before the race.

The location of the race within Santiago has changed since last year’s inaugural Santiago ePrix.  Last year, the race took place almost entirely on one of the large main streets of the city, whereas this year the race will take place at a temporary circuit within Parque O’Higgins, a large urban park in the city.  Here’s a video tour of the circuit from a local news station (video in Spanish).

BMW’s showing in Marrakesh suggested once again that they may have the rest of the pack beat when it comes to performance, as both of their cars were untouchable last race – except by each other.  After their self-imposed difficulties last time out, all eyes will be on them to see whether they really do have an equipment advantage over everyone else, and whether they can translate that into more winning.

Mahindra is another team to look out for.  They are currently 2nd in the teams’ championship, but in both races this season they’ve had a retirement.  Had their second car finished as well as their first, they could well be in first place.

And not to forget DS Techeetah.  They are in 1st place and have two solid drivers who have consistently good finishes, and came in a very close second place for the teams championship last year.  As they say, “to finish first, first you must finish,” and Techeetah has taken that philosophy to the lead with perhaps faster teams crashing out behind them – so far.

Then again, we’re only two races into the season, so trying to pick out trends already is a bit of a fool’s game.  But what else would I write about if not for that?

For those of us in the EV world, BMW driver Alexander Sims is someone to keep an eye on.  He’s been a professional racing driver for several years now, but unlike many of the other drivers in Formula E, Sims also drives an electric car in his daily life.  He was an early Tesla Roadster owner and also has a BMW i3 as a daily driver.

The Santiago ePrix starts at 19:00 UTC, or 11am PST/2pm EST, on Saturday January 26.  Head to Formula E’s website to learn how to watch the race in your country.