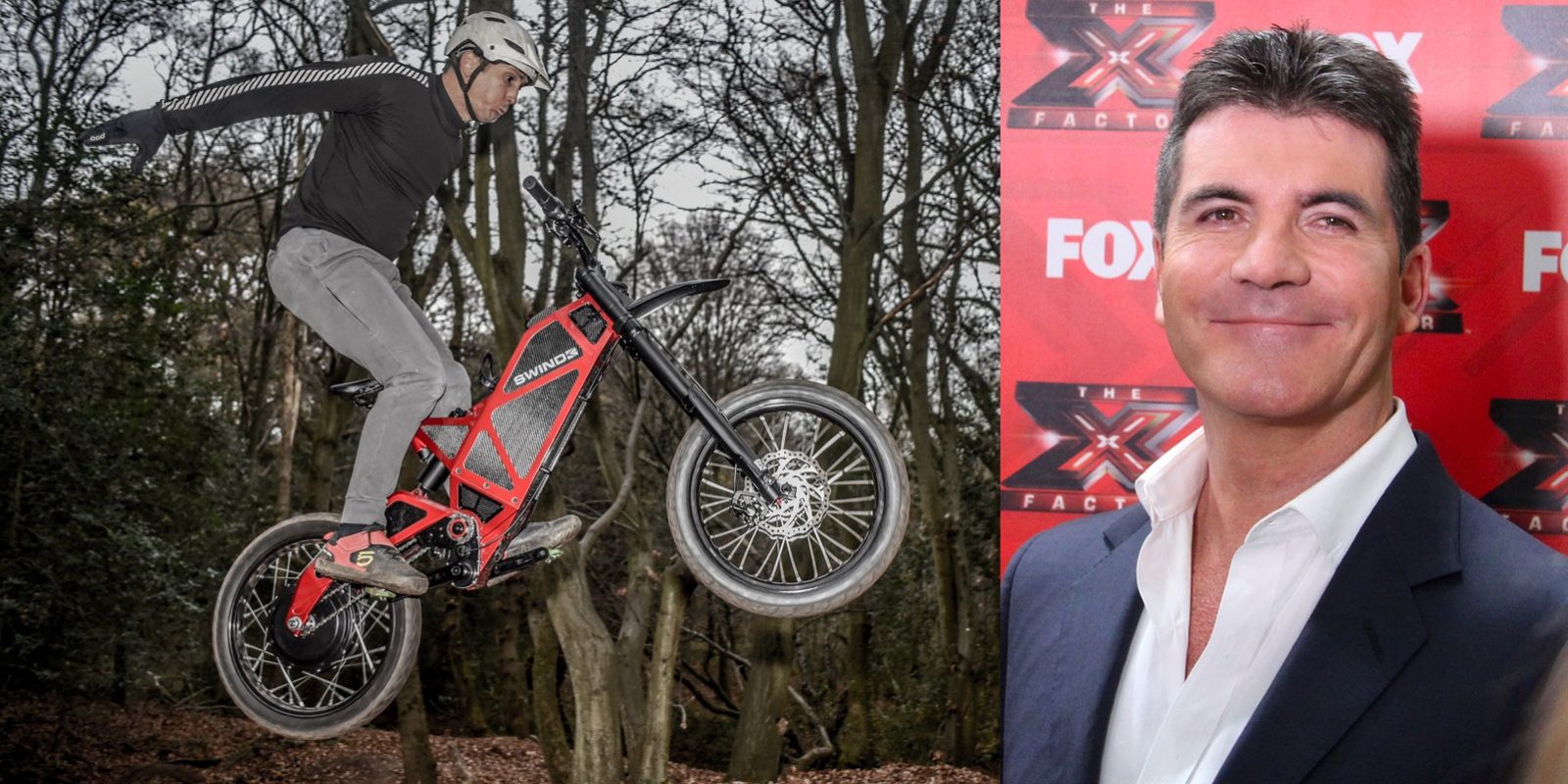 The electric motorbike Cowell was riding is known as a Swind EB-01.

Much of the media has misreported the story by describing the Swind EB-01 as an electric bicycle. In fact, the bike’s performance puts it into a very different category.

With a top speed of 60 mph (97 km/h) and a motor power of 15 kW (20 hp), the Swind EB-01 is much more of an electric motorcycle that happens to have pedals attached to it instead of foot pegs.

The bike takes significant experience and skill to ride safely, as it packs approximately 60x the power of a legal electric bicycle in Cowell’s native UK.

The TV personality apparently discovered the bike at a UK motor show in January and created significant buzz with his purchase. He became one of the company’s first customers for the approximately $22,000 electric motorbike. Arrangements were made to ship the Swind EB-01 to Cowell’s California home.

However, a new whistleblower report reveals that there was some hesitation from certain employees in the company about whether Cowell would be risking his safety on the highly specialized motorbike.

One former Swind employee apparently claimed to the British tabloid the Sun that he worried that Cowell could “break his f***ing neck” on the bike. He indicated that the bike required specialist training and demonstration, saying, “That thing is a death trap and should never have been sold to Simon without him being taught how to use it.”

Another anonymous source at the company said, “I said to my boss, ‘Are you showing Simon how to use this?’ He said he was just dropping it off and I said, ‘Are you serious?’”

Ultimately, Cowell’s accident, which Electrek‘s Michelle Lewis reported about on August 10, was most likely caused by this inexperience and unfamiliarity with the bike.

Cowell has several other true electric bicycles with much lower power levels. But when he tried operating the Swind EB-01 in the driveway of his Malibu mansion in front of his family members, he was reportedly unprepared for the extreme power. The bike entered an immediate wheelie, causing Cowell to fall backwards and break three vertebrae.

Controlling a powerful electric motorbike during a wheelie is a highly specialized operation that requires shifting the rider’s weight forward while feathering the rear brake to prevent pitching too far rearward.

But these maneuvers are not intuitive, and anyone without experience is unlikely to know to execute them.

The first thing someone with no training is going to do is squeeze that accelerator and they are going to have an accident. When I heard about the crash, I knew straight away he had been on our bike. I was wracked with guilt and thought I could have said more — but was worried about my job. I said they should change the settings so you can’t go into the highest map until it is going a certain speed — but was just told that was the way it was.

Now Cowell is reportedly considering taking legal action against the manufacturer, with a figure as high as £10 million being floated by legal observers to cover pain, suffering and lost income from missing several television appearances.

According to a representative for Cowell:

Simon is understandably extremely concerned for other peoples’ safety in relation to this bike. We’ve been pressing the manufacturer about this and will continue to press them, including in relation to the claims of the former member of staff.

I do feel bad for Cowell and wish him a speedy recovery.

And I do think he had no business being on a bike that he wasn’t prepared to handle, probably making an honest mistake after misunderstanding the power of the bike.

But I’m not sure where we draw the line between personal and corporate responsibility.

While Swind should have demonstrated more responsibility in ensuring that customers like Cowell understand the dangers of the product, at what point does that become their legal requirement? And how do you even check whether a customer is “experienced enough”?

This electric motorbike was designed for something entirely different than what Cowell was trying to do. This is an extreme off-road electric motorbike. It is meant to climb big dirt jumps and survive massive drops.

Cowell was reportedly riding this thing in his driveway, which is presumably close to a public road (and this is obviously not a street-legal motorbike). Cowell had the bike far out of its element and lacked the experience needed to operate it safely.

So the answer here seems to be that we need to find a way to further distance this sport of extreme electric mountain biking from normal electric bicycles so that consumers understand the difference, and companies can further discriminate between casual weekend riders and true motorbike athletes with proper riding skills for this level of vehicle.

At the very least (and this is something that could be done immediately) they could attach a warning sticker to the handle bars saying something like “if you twist this throttle, you are going to be on your back”. A better solution would be a smooth acceleration curve by default and then an advanced hack/setting that let the full throttle be uncorked. Also, as Harley has done with its Livewire, we would love to see more wheelie control hardware that cuts off power if the front wheel begins to lift off the ground.

But I’m guessing that’s not going to happen. Instead, lawyers will negotiate who owes who money.